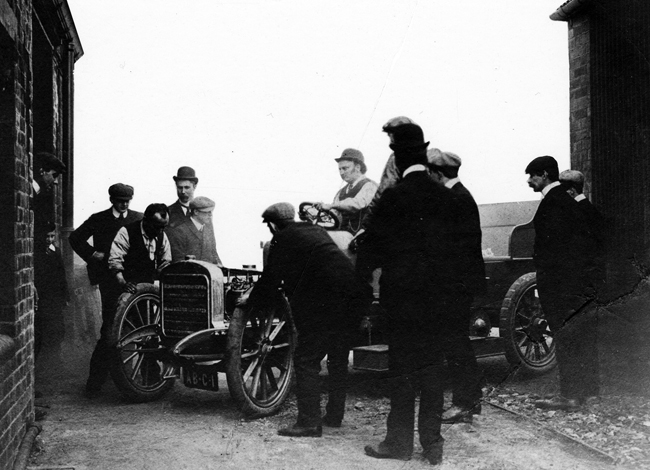 Once one of Britain’s largest car plants, home to Austin, BMC, BLMC, BL Ltd, the Rover Group, and MG Rover.

Commentary
In 1905, Herbert Austin bought a disused factory in the village of Longbridge, originally built for White & Pike, manufacturers and printers of tin boxes.

With design and development already underway, it was only a matter of weeks before the first Austin was displayed at the 1905 Olympia Motor Show.  However, this was not Herbert Austin’s first car; that, rather confusingly, was a Wolseley.

In 1884, as a young man of 18, Herbert Austin emigrated to Australia and joined the Wolseley Sheep Shearing Machine Company.  When Wolseley closed their business in Sydney, he moved back to England to become managing director of Wolseley’s new Birmingham works.  With the sales of shearing equipment tending to be seasonal, the factory’s output was broadened to include machine tools, bicycle components, and then - on Herbert Austin’s initiative – motor cars.

Production of Wolseley cars began at the turn of the century, but in 1905 Herbert Austin left the company to start a new business of his own.

The growth of the new company seems to have been quite rapid. By the end of the first year Austin had produced 120 cars with a workforce of about 270 people. 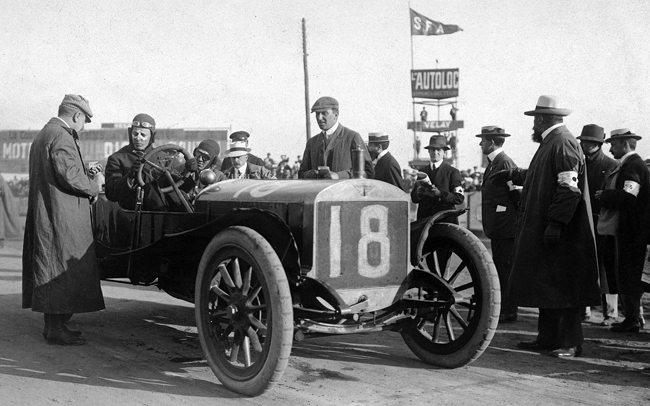 As he had done with Wolseley, Herbert Austin continued to take an interest in motor racing and trials.  In 1908, three 100 h.p Austins were the only British entries in the French Grand Prix held at Dieppe.  (One car retired and the others finished eighteenth and nineteenth.)

Over the next six years, the factory premises continued to expand with the creation of separate machine, erecting, trim and finishing shops, a powerhouse, copper and tinsmith shops, and even an outdoor test track.  By 1914, the Works had quadrupled in size.

During the First World War production at Austin, like other motor manufacturers, was turned over to military and munitions work.  Between 1914 and 1918, more than eight million shells were manufactured at the Works, together with guns, lorries, armoured cars, ambulances and around 2,000 aeroplanes.  In 1917, Herbert Austin received a knighthood, in recognition of his contribution to the war effort.

Over this period, there was a huge expansion of the Works.  New buildings, constructed under government guidance and funding, gave rise to the North and West Works, with the original White & Pike factory site becoming known as the South Works.  By 1917, 20,000 people were working at Longbridge, leading the company to create the Austin Village as a way of helping to accommodate its growing workforce. 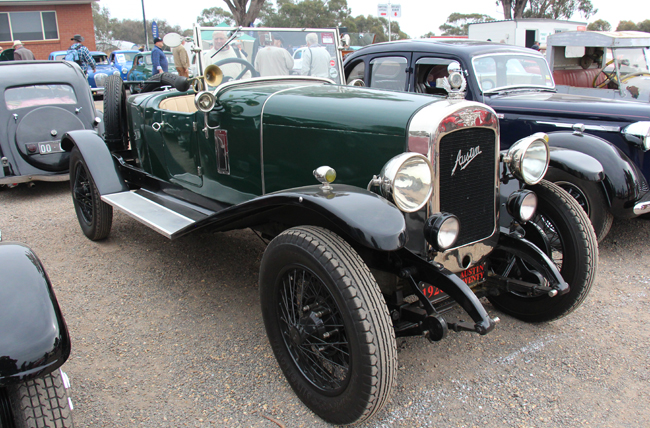 Car production at the Works did not resume until July 1919 with the re-launch of the Austin Twenty, first introduced just before the outbreak of war.  However, sales of the large car were disappointing, and in September 1920 Austin shares hit an all-time low.  In April 1921 the company was placed in the hands of the Official Receiver.

Initially Herbert Austin ignored the administrators’ advice and pressed on with plans to increase tractor production and build a small light aircraft for civilian use.  However he was eventually persuaded of the need to introduce smaller cars into the range, more in keeping with the straightened economic times.

The spectre of closure was averted by the development in l921 of the Austin Twelve (a smaller version of the Twenty), and the Austin Seven designed, in secret, at Herbert Austin’s home, just a few miles away at Lickey Grange. 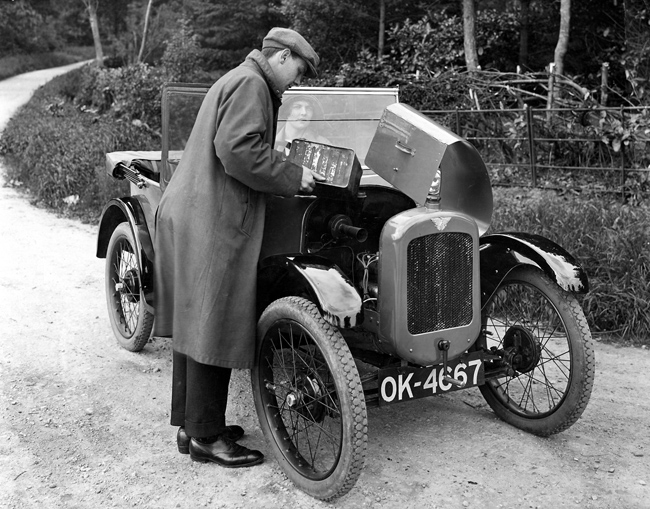 Like the Mini, almost 40 years later, the Austin Seven achieved a wide degree of social acceptability, prompting steady sales until well into the 1930s and, together with the Twelve, ensured a remarkable recovery for the firm.  In 1934, Austin was briefly the largest British motor car manufacturer.

In early 1936, Longbridge once again became involved in preparations for war.  Herbert Austin was appointed chairman of the Shadow Aero Engine Committee, and two large shadow factories were built on the south-eastern side of the Works, just over the county boundary in Worcestershire.

Known as the East Works, the buildings included an underground factory for aircraft assembly. By March 1940, a series of tunnels had been constructed linking all parts of the work site - designed to provide shelter for the workforce and to enable them to move about the factory in relative safety. 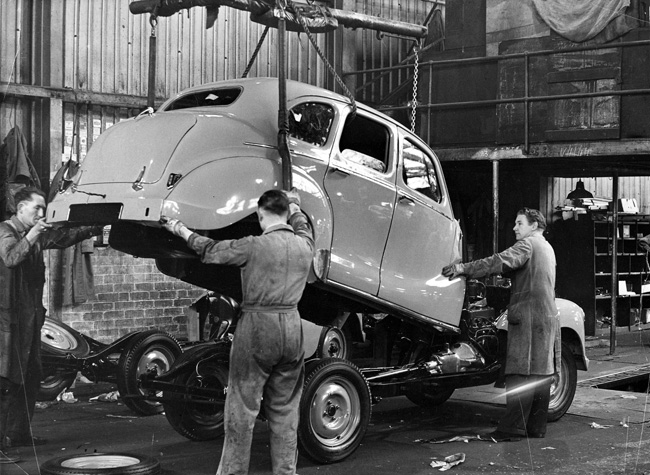 Austin resumed car production almost immediately after the War, but with priority given to exports, it was difficult to satisfy home demand.  It was around this time that the company began to style itself “Austin of England”, and the familiar Flying A bonnet mascot was introduced.  The first models to carry this were the A110 Sheerline and A120 Princess, launched in 1947.

In 1951, a new Car Assembly Building (CAB) was commissioned, built on the old wartime airfield, and one of the most advanced of its kind in the world.  A year later, Austin merged with the Nuffield Organisation (Morris, MG, Riley and Wolseley) to form the British Motor Corporation (BMC).  Although Lord Nuffield became chairman of the new group, Longbridge became, its headquarters - led by Leonard Lord, Herbert Austin’s protégé.

In 1956 an Exhibition Hall was added to the site, and two years later, the first of BMC’s Farina models were introduced – the Austin A40.  The services of the Italian design house, it is said, were sought by BMC after some rather negative comments made by the Duke of Edinburgh about the style of the cars that he had seen during a visit to the factory. 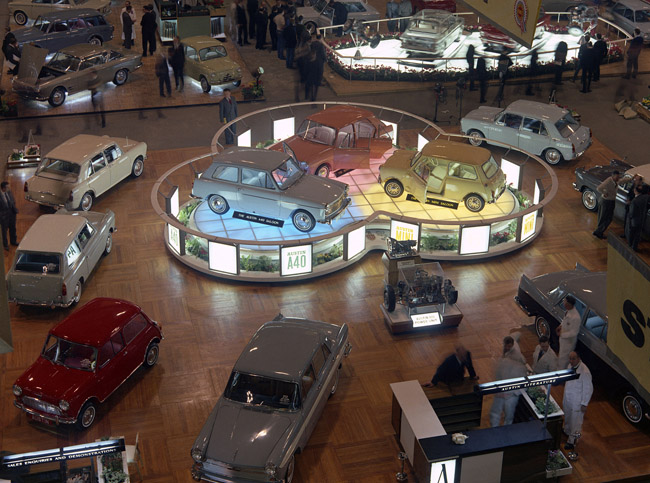 Although the early Sixties were a time of some success, with buoyant sales of the Mini, 1100, and Farina saloons, profitability was beginning to become a major problem for the group.  In 1966, BMC joined with Jaguar and Pressed Steel to create British Motor Holdings, and then in 1968,     with encouragement from the UK government, it merged again with the Leyland Motor Corporation to form British Leyland.

The rest of the story is sadly familiar, with a steady decline in the Company’s fortunes.  Despite the creation in 1980 of advanced production facilities (known as the New West Works) for the manufacture of the Metro, and a later collaboration with Honda, the company under guise of the Rover Group and the MG Rover was unable to succeed.

In April 2005, MG Rover’s directors called in the administrators, and three months later it was announced that the company had been sold to the Nanjing Automobile Corporation, China’s oldest carmaker.

Most of the Longbridge Works have now been demolished, replaced largely with housing and retail outlets.  The main factory entrance has been retained along with the Exhibition Hall and the Car Assembly Buildings from 1951 and 1963, and are now occupied by MG Motor UK.

Further details
• Making Cars at Longbridge: 100 years in the life of a factory, Gillian Bardsley & Colin Corke, The History Press, 2008.
• www.austinmemories.com: a superb site, covering all-things Austin, including the development and history of the factory at Longbridge.