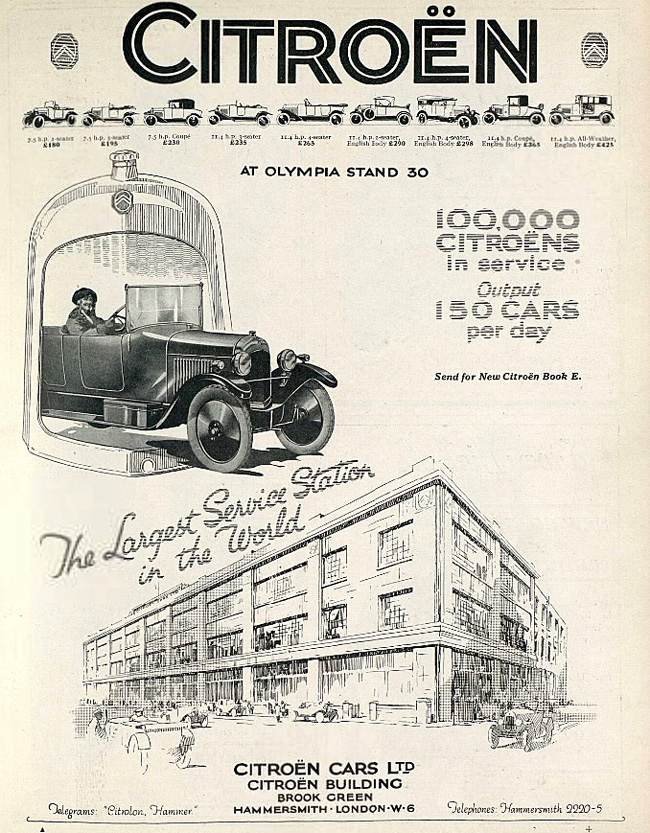 The former Citroën UK headquarters and, at one time, said to be the largest service station in the world.

Commentary
Originally constructed in 1916 as a motor service depot and showroom for the Ford Motor Company, the building was occupied by Citroën between 1923 and 1938, and during that period became known as the Citroën Building.

It was initially planned to be five storeys in height but, due to wartime shortages of materials, became limited to just three, plus a basement. The building was designed by Manchester architects, C.H Heathcote & Sons, who were earlier responsible for Ford’s factory at Trafford Park in Manchester, and were employed again in the late twenties for the development of Ford’s new plant at Dagenham. 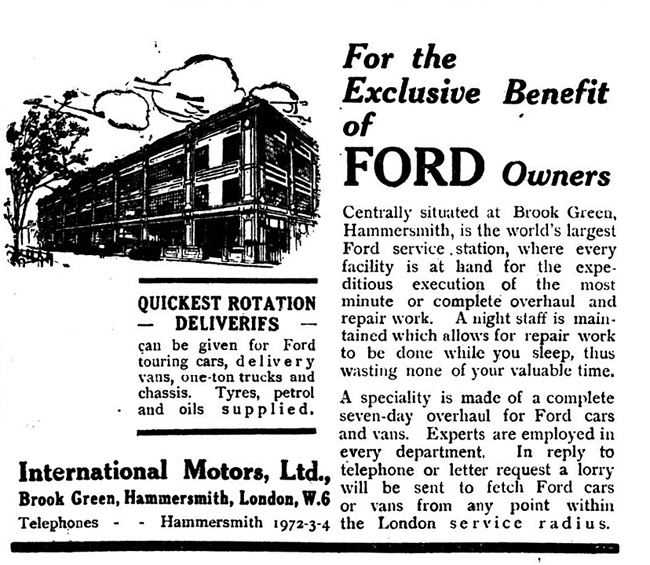 The depot and showroom at Brook Green probably didn’t open until 1919, and then under the auspices of International Motors who, initially, sold only Ford cars and trucks from the building.  However, this arrangement was terminated in 1922, with the announcement on the 3rd July that International Motors had ended its contract with Ford, and would be henceforth devoted to the sales and service of Dodge Brothers, “whose motor car was the wonder car of the world”.

But this agreement was also relatively short-lived, for by October 1923, Citroën had taken over the building as their London headquarters.

Citroën didn’t begin car manufacturing until June 1919, in their former munitions plant at the Quai de Javel in Paris.  However, the company’s growth into a major manufacturer was quite remarkable.  As the first European car manufacturer to use techniques of mass production, Citroën had, within a year, overtaken its much more established rivals of Renault, Peugeot and Fiat. 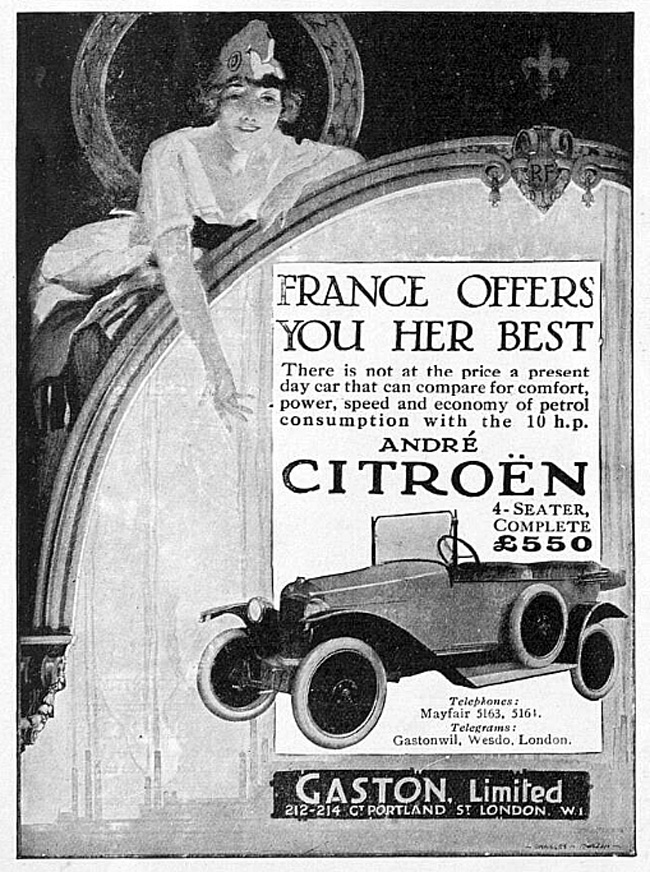 Citroën introduced their first car, the Type A, to Britain at the Olympia Motor Show at the beginning of November 1919, with the American agents, Gaston Ltd., appointed   as sole UK distributors.

The new cars received very positive reviews – particularly for their reliability, their brakes – bettered only by a Delage, according to one correspondent – their low running costs, and the equipment that came within the price, which included electric lighting, a self-starter, and five Michelin detachable wheels.

Citroën’s reputation was reinforced by the success of two Type B2 cars in the 1922 Scottish Reliability Trials, where they finished first and second.  The leading car averaged 38.8 mpg, taking the Scottish Cup, the top British fuel economy award, in the process.

With such encouraging sales, André Citroën decided that a national network of dealers and service agents should be set up in Britain, with the headquarters in London.  Brook Green was chosen for this, and the first dealership established in Worthing, in Sussex, where, in 2021, it is still operating.

Now Grade II listed, the Citroen Building was one of the first buildings in the country to have a reinforced concrete frame.  In his book on the British Citroën, Malcolm Bobbitt explains that the main showroom was on the ground floor, with a delivery bay, petrol pumps and car wash to the rear.  Cars were delivered to Brook Green via the railway sidings which adjoined the building, and a purpose-built lift took them up to the first floor where pre-delivery inspections were carried out, and to the top floor for servicing.

Other features included a machine and paint shop, a ventilation system designed to remove exhaust fumes from the building, high standards of lighting and heating, plus a canteen and a first-aid unit for employees. 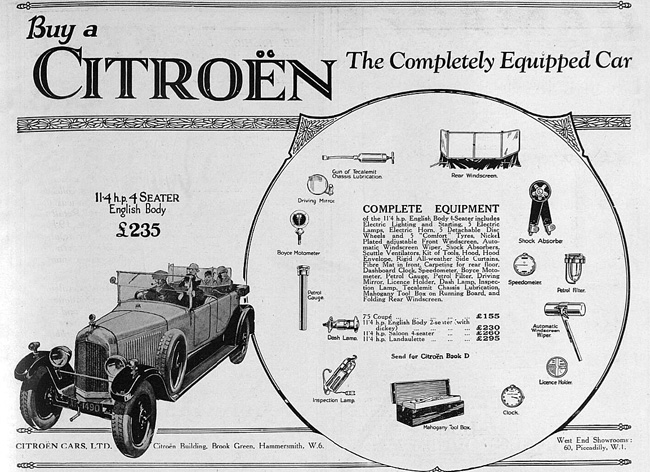 The new facility was almost certainly contributed to Citroën’s record UK sales, which doubled in the last three months of 1923, and continued to rise over the next two years.

In 1926, the British arm of Citroën moved into a new headquarters at Devonshire House, in central London, with the Citroën Building at Brook Green remaining the main service and supplies centre.

However, by the early 1930s, Citroën’s position within the market had deteriorated.  With reduced sales and a smaller workforce, Citroën was no longer the dominant French motor manufacturer.  Added to this was the deterioration in André Citroën’s health, the company’s over-borrowing, and the initial unreliability of their revolutionary new car, the Traction Avant (designated the ‘7’).  Launched in May 1934, despite requests by the design team for more time for development and testing, new owners faced unacceptable levels of teething problems, particularly with the car’s gearbox and drive shafts. 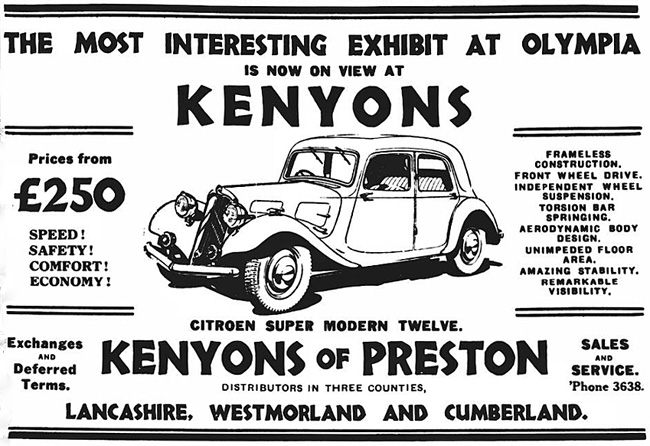 Although many of these faults were remedied within a few months with a revised version of the car, known as the ‘7B’, it was too late to save the company.  Unable to pay its suppliers, Automobiles Citroën was placed in receivership on the 21st December 1934.  Over the following twelve months, ownership and control of the company passed to the Michelin family.

In assuming responsibility for paying off Citroën’s debts, Michelin inevitably made cutbacks – and in Britain this mean the closure of Brook Green in 1938, with the stores being transferred to Citroën’s British factory site in Slough, established twelve years earlier.

After Citroën’s departure from Brook Green, the building was requisitioned during the Second World War as an RAF warehouse and maintenance depot, and later used for the manufacture of light bulbs by Osram, who were already using the building next door. 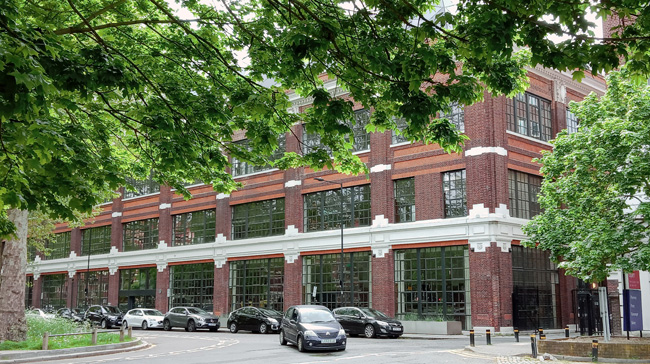 During the late 1970s, the premises were occupied by the Government’s Central Office of Information, and later became a self-storage facility.  In 2016, it was re-furbished as offices, and during this process, a domed glazed roof was placed on top of the building, enabling three further storeys to be added, in the process giving the building the extra capacity envisaged by the original architects.

In 2017, the re-vamped Citroën Building was short-listed for a number of architectural awards. 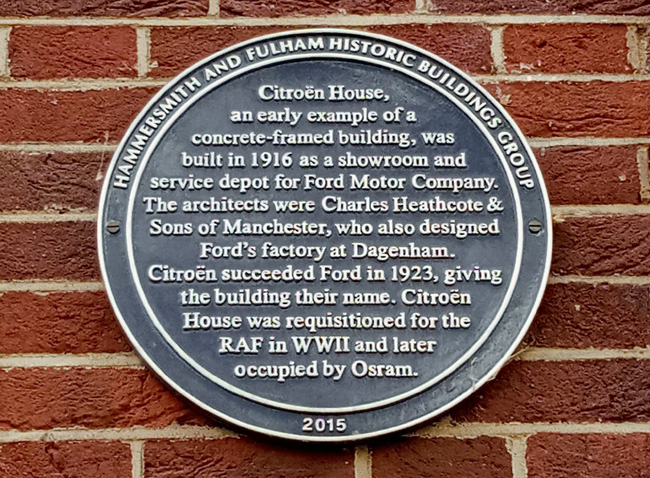 The former Citroën UK headquarters and, at one time, said to be the largest service station in the world.