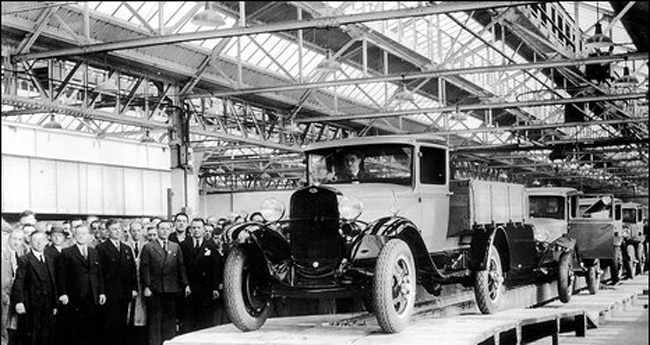 Commentary
In 1911, Ford established a manufacturing base in Britain at Trafford Park, near Manchester, but the initial success of the Model T meant that the company was soon looking for ways to expand its production capacity.

As early as 1913, Percival Perry, Ford’s general manager, was proposing the construction of a new factory on an open space near Peartree Green, on the eastern side of the River Itchen in Southampton.  But, this idea was rejected by Henry Ford, as was a further proposal for the construction of a factory in nearby Millbrook.

In 1919, Ford established a factory in Cork in south-west Ireland, initially concentrating on the production of tractors, it soon became a supply factory for the assembly of the Model T in Trafford Park.  However, Irish independence and the creation of the Irish Free State in 1922, meant that imports to Britain from Ireland became subject to 22¾ per cent tariff.  A larger UK manufacturing base for Ford was becoming essential.

In 1923, a fresh attempt was made to find a site for a new Ford factory in mainland Britain.  Details of 37 potential locations were compiled, but by July a site in London on the northern side of the river, in the neighbourhood of Dagenham was under close consideration.  Its benefits included deep-water docking facilities, good transport links to the rest of the country, and a growing pool of labour from the nearby Becontree housing estate.

On 10th July 1924, Mr H S Jenkins, Managing Director of Ford (England) announced the company’s intention to buy a 307-acre site on the north bank of the Thames, to build a factory employing 10,000 people and capable of producing 500 cars per day.  (In December 1908, part of the site had been rented by the Aeronautical Society as an experimental and secret site for developing and testing early aircraft, believed to be the first of its kind in Britain.)

A prodigious effort was required to prepare the site; over 22,000 concrete piles were driven into the marshy ground on which the works would rest.  Construction work began in 1929 and, over the next two years a jetty, coke oven, power house, assembly and manufacturing building, blast furnace, foundry, and machine shop were erected.  The Ford plant in Dagenham became the largest car factory in Europe.

An important requirement, throughout the project, had been for the factory to be as self-sufficient as possible.  Therefore, in addition to all the facilities listed above, Henry Ford also encouraged his suppliers to set up their own factories close to the Plant.  These included Briggs, who manufactured bodies for Ford in Detroit, and the Kelsey-Hayes Wheel Co.  Both companies were later into Ford’s ownership.

Over the weekend of the 19th and 20th September 1931, specially chartered trains brought 1500 workers south from Trafford Park, with production starting the following day. Although the factory was still incomplete, the first vehicles - Model AA 30cwt trucks - were produced on 1st October 1931.

However, production at the new plant initially remained low; a combination of the economic recession and a model range (Models A and B) that was more designed for America than Europe.

If the Dagenham plant was to survive, a new model was required.  This came in 1932, with the Model Y.  Also built in Germany, Spain, France and New Zealand, it had a small 933cc 4-cylinder side-valve engine, and was designed to compete with the likes of the Austin Seven and Morris Minor in the 7 and 8hp sector which, in 1931, accounted for more than a quarter of UK sales.  The Model Y was a great success, capturing 40 per cent of the market share for cars of 8hp and under.  In 1934 it was re-named the Popular, and in 1935 its price was briefly reduced to a magic £100.  A larger 10hp version, the Model C, was also introduced, making Ford, by 1936, the third largest UK manufacturer.

In the post war years, the new Consul, Zephyr and Zodiac range was introduced.  The factory was enlarged, production doubled and by 1953 40,000 people work at the plant.

During the 60s, 70s and 80s, Dagenham produced a succession of Britain’s most popular cars: the Anglia, Cortina, Fiesta and Sierra.  However, in May 2000 Ford announced that vehicle assembly at Dagenham would cease and on the 20th February 2002, the vehicle assembly lines stopped for the last time. In 71 years Dagenham had built 10,980,368 cars, trucks and tractors.

Today, the Dagenham plant has significantly contracted from its heyday in the 1950s.  With around 2,000 people now working on the site, it is now Ford’s global centre for diesel engineering and its principal diesel manufacturing facility.