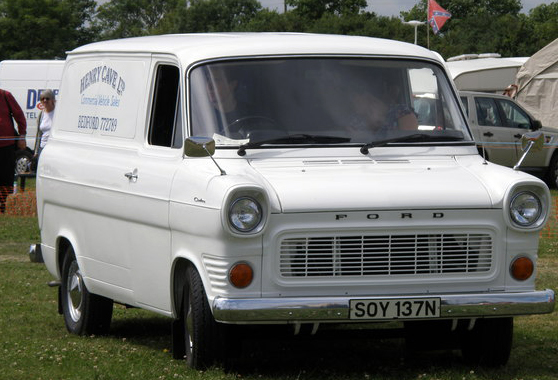 The one-time UK centre of production of the Ford Transit.

Commentary
On 24th July 2013, the last Ford Transit to be manufactured in Britain was completed at Ford’s Swathling factory, near Southampton.

The story of the plant goes back to February 1939 with the opening of a purpose-built factory at Southampton Airport for Cunliffe-Owen Aircraft Ltd, a British aircraft manufacturer and repairer.

However, by 1947, with a declining order book, Cunliffe-Owen Aircraft was forced to close.  Two years later, the premises were taken over by Briggs Motor Bodies, a US company, specialising in the production of panels and body pressings for a number of UK car manufacturers.

In 1953, the Ford Motor Company took over Briggs Bodies, with the Swathling factory becoming a stamping plant for Ford vans and trucks.

From 1965, this work included the supply of pressings for the new Transit van, and in 1972, UK production and assembly of the entire van range was transferred from Langley in Berkshire to the factory at Swathling.

Ford continued to manufacture the Transit in Southampton for the next 41 years, with peak production reached in 1989 and 1998.

In 2009, Transit production at the Swathling factory was cut by half, as Ford’s new factory in Kocaeli, Turkey, came on stream.  In October 2012, the Company announced Swathling’s closure, with future European Transit production to be centred entirely in Turkey.

In March 2014, Ford’s plan to develop a vehicle refurbishment centre on the old factory site was approved by Southampton city’s planning panel.

With thanks to Michael Trolove for the Transit image.

The one-time UK centre of production of the Ford Transit.