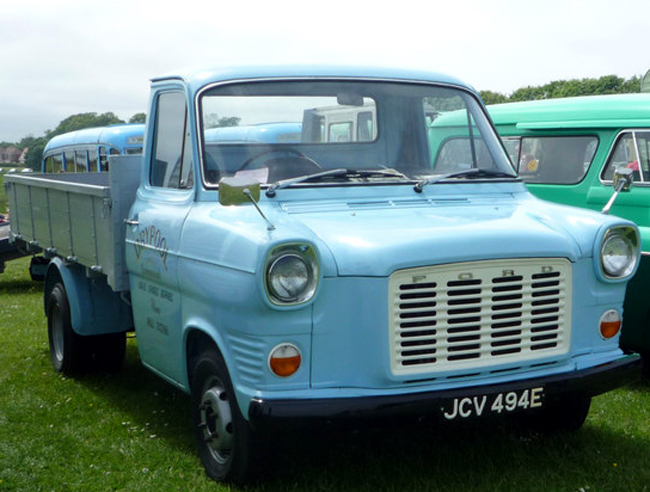 The long-time base for Ford’s UK commercial vehicle operations, and the original home of the Ford Transit.

Location
Between Parlaunt Road and Sutton Lane, Langley, near Slough.

Commentary
In 1936, with a need for greater production capacity, Hawker Aircraft purchased Parlaunt Farm, near Langley, on which they built new factory and airfield.  By 1938, the building was completed and the factory was producing one Hurricane aircraft a day (rising to five a day by 1942).   Other aircraft developed at Langley included the Tornado, Typhoon and Tempest.

In 1951, aircraft assembly and testing were transferred to Dunsfold Airfield in Surrey, and in 1958 the premises closed, with production moving to the Hawker factory at Kingston-upon-Thames.

Although the Ford Motor Company had had, by this stage, a significant presence in Britain for almost 50 years, its European operations functioned as separate companies.  The range of cars, van and trucks produced in England and in (the then) West Germany had nothing in common; there was no carry-over of designs or engines, and even the assembly of the vehicles was based on different metric and imperial systems of measurement.

In the early Sixties, however, all this began to change.  The trigger, for what would eventually become Ford of Europe was the separate decisions by Ford UK and Ford of Germany to replace their existing range of medium-sized vans.  In the case of Ford UK, this was the Thames 400E, and for Ford of Germany, the Taunus FK.

The final decision to go-ahead with both projects lay with Henry Ford II, the eldest grandson of the Company’s founder, and Ford chairman and chief executive.  For many years he had been concerned over the fragmented way in which the Company’s European operations functioned, and in order to start a process of unification, he announced that he would authorise only one project to replace the two existing ranges.

Work on the new van began in 1961, with UK and German staff working together.  Everything was new, with no carry-over of existing designs.  Development of the vehicle took place in both Britain and West Germany, although Graham Robson implies that Ford UK led the project’s design and engineering.  However, the name of the vehicle probably owed more to its German than British parentage; Transit was already being used on some off the German Taunus vans, and seemed well suited as a name for both markets.

The early manufacture of the Transit (particularly in the UK) was a complicated arrangement; caused, in part, by a lack of production capacity at Ford - thanks to the strong demand for the then current Anglia and Cortina ranges.

In spite of the good intentions of Henry Ford II, the new Transit was initially built at both a brand-new plant at Genk in NE Belgium, and Ford’s existing commercial vehicle factory at Langley, in Berkshire.

However, the situation in the UK was further complicated with the production of Transit body panels at Fords’ ex-Briggs Motor Bodies plant at Southampton, resulting in a 60-mile journey to Langley for final assembly.

The launch of the new Transit took place on 8th October 1965 – the same day as the official opening of the Post Office (now BT) Tower in London.

The vehicle was produced in many different variations, with diesel and petrol engines of varying sizes, in long and short wheelbase form, and as a van, minibus and truck – plus a multitude of further bespoke designs.

Between 1965 and 1973, more than 300,000 Transits were produced at Langley.  In 1972, final assembly was transferred to Ford’s plant at Swaythling, near Southampton in Hampshire, again for reasons of greater production capacity.

In 1986, Ford sold its truck business, including its base at Langley, to rival truck maker Iveco.  Thirteen years later, the Langley plant was closed.

In 1990, the buildings were demolished and the area re-developed for new housing, offices, warehousing and a golf course.

Thanks to J Thomas for the image of the Transit.

Between Parlaunt Road and Sutton Lane, Langley, near Slough.

The long-time base for Ford’s UK commercial vehicle operations, and the original home of the Ford Transit.