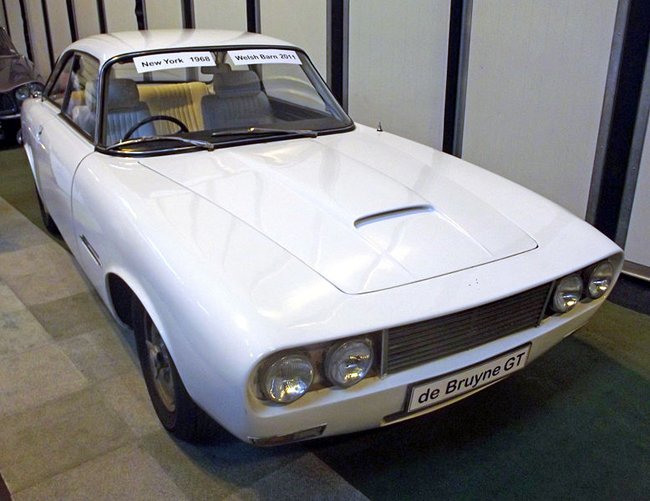 A final attempt to save and further develop the Gordon-Keeble.

Location
Heath Garage, 220, High Street, Newmarket, CB8 9AP; the site is currently a Shell Petrol Station, and is situated at the junction between High Street and Dullingham Road, next to the White Lion Hotel.

Commentary
In 1968, the assets of Keeble Cars Ltd were bought by John de Bruyne, whose father, Dr Norman de Bruyne, was a chemist, and inventor of Araldite glue.

Based at the Heath Garage, then a Ford franchise, John de Bruyne re-launched the Gordon Keeble as the de Bruyne Grand Touring.

Mechanically, the car remained very much a Gordon Keeble, with the de Bruyne modifications focussing primarily on the design of the front and rear of the car, and of the interior.

The main responsibility for the re-styling lay with fellow director and John de Bruyne’s brother-in-law, artist and illustrator Peter Fluck – remembered by many today as one of the co-creators of the political satire, Spitting Image.

Alterations to the nose of the car included the replacement of the slanted double headlights with a simpler, more flush-fitting front, retaining the four headlights in a more conventional position.  With the removal of the tiny fins from the rear of the Gordon-Keeble, and the use of Ford Zodiac Mk IV tail lamp clusters, the back of the de Bruyne also had a more stripped-down appearance than its predecessor.

However, the Grand Touring was not the only car developed by de Bruyne.  Also on the stocks was the Grand Sport, a mid-engined two-seater, also with a V8 engine and, in profile, not unlike the de Tomaso Pantera.

Both cars were successfully exhibited at the 1968 New York Motor Show.  But, on return to Newmarket, after some reflection, it was decided that the complexities of producing both cars in higher volumes made the project unviable.

The single Grand Sport was broken up, but the de Bruyne Grand Touring is believed to survive.

A final attempt to save and further develop the Gordon-Keeble.