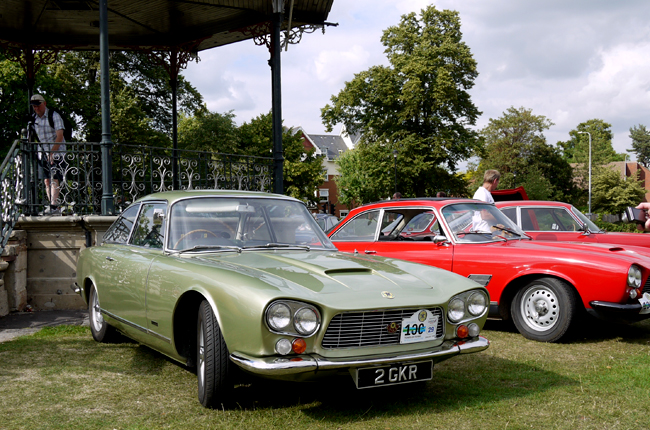 Commentary
The Gordon-Keeble name is derived from its founders, John Gordon and Jim Keeble.

After serving in the Army and then living in Italy, John Gordon returned to England in 1951 where he set up a small business rebodying Rolls-Royce vehicles as shooting brakes.  During the late 1950s his links with figures in motor sport and the wider motor industry led to his involvement in the development of Peerless and Warwick cars.

Jim Keeble was a motor engineer, with an interest in motor sport.  He ran a successful garage business on Grove Lane in Ipswich, with much of his work involving the tuning and preparation of customers’ racing cars.

The two men came together through one of Jim Keeble’s customers, US Air Force pilot, Rick Nielson, stationed nearby at RAF Bentwaters in Suffolk.  Nielson had the idea of installing a large American engine into a lightweight British sports car, and suggested to Jim Keeble that a Peerless chassis might be just the job.  He arranged for a Chevrolet Corvette engine to be shipped to Britain from the States, and Jim Keeble spoke to John Gordon at Peerless Cars for the supply of a suitable vehicle.

Work on the Nielson car began at Peerless Cars factory in Slough; but not long into the project, John Gordon was ousted as managing director.  He did, however, retain his position at the nearby Peerless Motors Limited, a sister company, handling the sales of Peerless cars, and it was to here that the work on US pilot’s car was transferred.

However, it did not take long after leaving Peerless Cars for John Gordon and Jim Keeble to discuss the idea of developing a completely new car; quite separate from the Nielson project and, as Giles and Knott explain, “to be vastly more advanced in every aspect than the Peerless.”

Known initially as the Gordon GT, work on the chassis design and sourcing components began in November 1959, largely under the experienced eye of Jim Keeble.  John Gordon took responsibility for firming up the body design, and decided at the outset to employ an Italian  stylist.  He visited the 1960 Turin Show to meet Nuccio Bertone, who had recently engaged a young Giorgetto Giugiaro, just out of college.  The Gordon GT was Giugiaro’s second assignment - the Alfa Romeo 2600 was his first.

Relatively few stipulations were made by John Gordon in his design brief: the car had to be a four-seater, it had to fit Jim Keeble’s chassis, and it also had to have four headlights – just like Rick Nielsen’s Corvette.

By middle of January 1960, Jim Keeble’s chassis was apparently complete, and with the engine that had initially been earmarked for Rick Nielsen, it was transported to Turin to be mated with Giugiaro’s newly-designed body.

By March 1960, the Gordon GT – although not yet complete – was nevertheless ready to be shown at the Geneva Motor Show, where it received extensive acclaim.  Shortly afterwards, Autocar tested the completed car, reporting that it was” the most electrifying vehicle we have ever tested.”

Having designed and built the car in a little over four months, further progress in bringing the Gordon GT to the market was very much slower.  The reason for the delay is not clear; although difficulty in raising further financial backing for the project is probably the most likely explanation.

Production of the new car was finally announced in March 1964, with a launch party at the Savoy Hotel in London.  Although the new cars closely resembled the prototype, a number of significant changes had taken place in the intervening period.  Body construction was now in fibreglass rather than aluminium; a larger 5.3-litre Chevrolet engine had been installed; and a new company and management structure had been created; giving rise to a new name for the car, reflecting Jim Keeble’s significant involvement in the project.  The factory production site was also moved - from Slough to Southampton Airport, reportedly in a hangar where Spitfire aircraft were built during World War Two.

The Southampton factory site is now the location of Southampton Airport's passenger terminal and its car park.  This recorded with a commemorative plaque, located just inside the entrance to the Airport’s short-stay car park.

The new Gordon-Keeble GK1 attracted a number of high-profile buyers and, at first, demand for the car was high.  However, problems with some of the bought-in components and an initial asking price that was probably far too low, the company was unable to build up any kind of capital reserve.  (Rival models, produced by Aston Martin and Jensen, were between two and three thousand pounds more expensive.)

In May 1965, after producing approximately 80 cars, Gordon-Keeble Ltd went into liquidation – but this wasn’t quite the end of the story.

Harold Smith, a one-time agent for Gordon-Keeble, bought the manufacturing rights of the company and transferred business to an old factory site in Sholing, a couple of miles south of Eastleigh.

Now trading under the name of Keeble Cars Ltd, production of the Gordon-Keeble IT as it was now known, continued for just over a year, enabling about 19 more cars to be produced.  At the end of 1966, the factory closed.

In 1968, John de Bruyne from Newmarket in Suffolk announced the development of a revised version of the Gordon-Keeble, to be known as the de Bruyne and built in the United States.  Although a prototype was created for the New York Show, no further examples were manufactured.

With thanks to Stephen Harvey for the Gordon Keeble image.