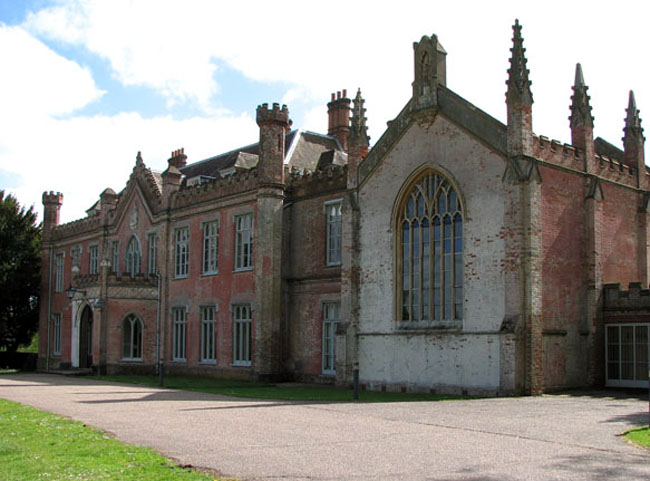 Commentary
The origins of Ketteringham Hall, set within a 36-acre estate of woodland and open grassland, may be traced back to the late 15th century.  It was reputedly rebuilt in 16th century, and restored in the 17th century.  After a fire in the early 1800s, the Hall was remodelled around 1839 in its present Gothic form.The childhood home of Lady Jane Grey, who later became known as the Nine-Day Queen (as English monarch from 10th – 19th July 1553), the Hall was bought in 1836 by Sir John Boileau in whose family it remained until 1948.During the Second World War the Hall was taken over by the 2nd Air Division of the US Eighth Air Force, with between 300 and 400 service personnel stationed on site, occupying Nissen huts constructed adjacent to the Hall.  During this time the Boileau family lived in small wing of the main building.In 1948, the Hall was sold to the Duke of Westminster, and later used as a school and then a college.

Colin Chapman bought the estate in 1970, and used the Hall as the Company’s headquarters and the base for Lotus racing team. When Lotus Racing was disbanded in 1994, Ketteringham Hall continued to be used by Lotus as a venue for marketing events and meetings.  The stable block was converted to a factory service centre until it was moved in 2002 to the main Hethel site.  Today the Hall and estate are used as offices and for weddings and other function, and remain in the ownership of the Chapman family.

The one-time base of Team Lotus.