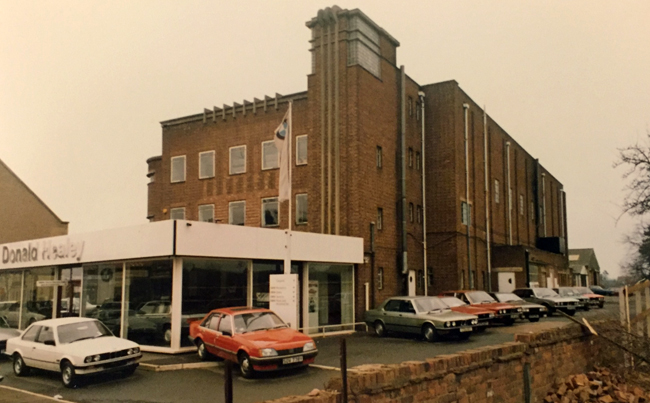 Commentary
In 1963, the Donald Healey moved his business from the Cape Works to the Old Cinema on Coten End, a distance of about three quarters of a mile.

The Cinema had been built in 1940 and was converted by Donald Healey into the company’s headquarters and showroom with the words “International Sports Car Centre” on its hoarding.  The venture, however, does not appear to have been a success.

In 1967, BMC was taken over by the Leyland Motor Corporation.  By the end of the year, the new company chairman, Sir Donald (later Lord) Stokes, had decided to end production of both the Austin Healey 3000 and the Sprite, informing Donald Healey that the long-standing agreement to make a payment to the Donald Healey Motor Company for each car produced bearing the Healey name would also be coming to an end.  Nevertheless, production of the MG Midget, based on the Healey design and virtually identical to the Sprite, continued.

In 1972, the Jensen-Healey was launched, based on Vauxhall components; but the car was not a commercial success.  In 1974, Donald Healey sold his company to the Hamblin Group, although not the right to the Healey name.

The former cinema and showroom were demolished in the mid-1980s and replaced by a retirement complex, opened in 1989, called Healey Court.