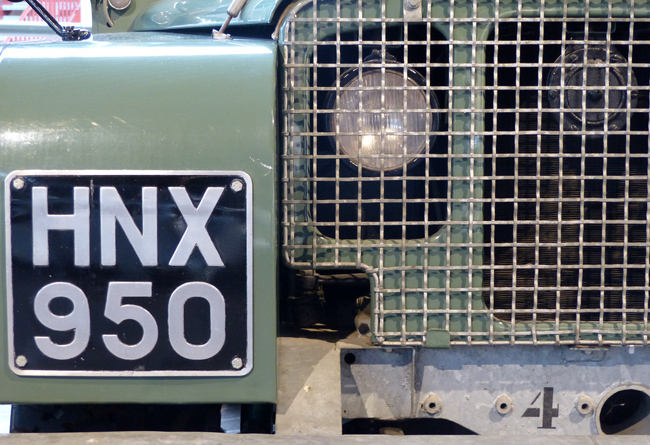 It is here on the beach at Red Wharf Bay where Maurice Wilks, engineering director at Rover, and his older brother and Rover chairman, Spencer Wilks, reputedly sketched out their initial ideas for the first Land Rover.

Location
On the eastern side of the Isle of Anglesey, to the south east of the village of Bennlech. 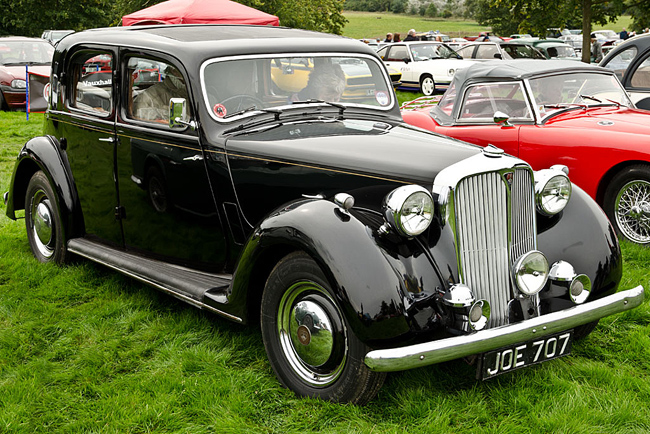 Commentary
When car production resumed at Rover after the Second World War, the company’s model range was not significantly different from its pre-War line up; comprising four outwardly similar saloons: the Ten, Twelve, Fourteen and Sixteen.

Although making well-equipped and reliable cars, sales for Rover in both home and overseas markets were relatively slow.  What Rover really needed, was a car that it could sell in export markets; for, in the immediate post-War years, it was export performance that determined British manufacturers’ allocation of steel from the Ministry of Supply.

In the early months of 1947, Maurice Wilks, the Chief Engineer at Rover, acquired an ex-US Army Willys Jeep to help clear fallen trees from the grounds of his home in Warwickshire.  He liked the Jeep, and used it also on trips to the family’s holiday home at Tros yr Afon, near Beaumaris on the Isle of Anglesey. 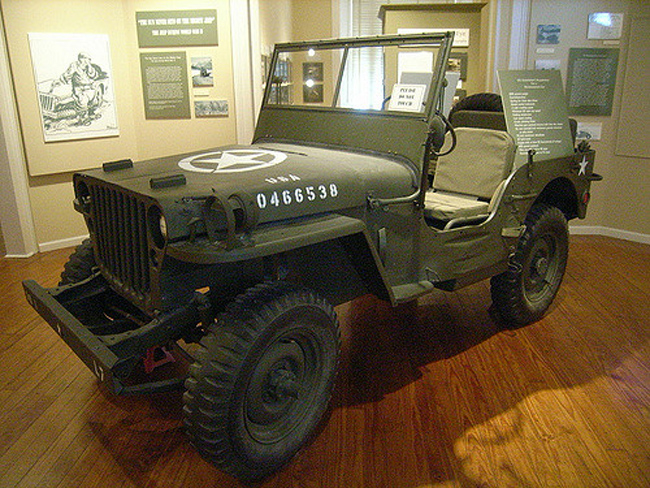 Maurice Wilks clearly recognised the value of a 4-wheel-drive vehicle of this kind, and felt that there could well be a market for a civilian version, catering for the needs of farmers and others working on rough or open land.  It was also a vehicle that he believed Rover could design and put into production relatively quickly – requiring minimal tooling (simple aluminium panels, and a box-section chassis), with the engine, axles and primary gearbox available from Rover’s existing model range. All they really needed after this was a gearbox that delivered drive to both the front and rear wheels, and a bit of time for development to make sure that the whole thing worked.

It seems Maurice Wilks had probably already given the idea some thought before sharing it with his elder brother, Spencer Wilks, who was Rover’s Chairman, on holiday in Anglesey in Easter 1947.  The story goes that the two brothers discussed the idea walking along the beach in Red Wharf Bay, with Maurice sketching out his ideas in the sand. 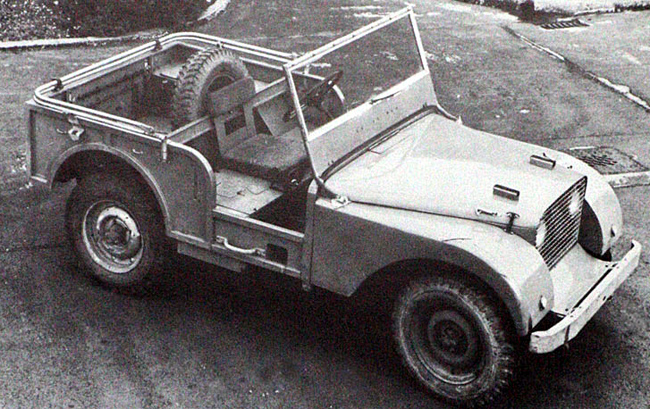 The project was presented to the Rover Board in the autumn of 1947, and unanimously approved.  The first prototype had Rover running gear and a Rover-designed body fitted to a Jeep chassis.  It also had a central steering wheel, although this arrangement was soon dropped because of the difficulties it posed for making hand signals.

The bodywork was made of Birmabright alloy – a compound of aluminium and magnesium.  It was light, corrosion resistant, and had been used extensively in aircraft production during the Second War.  (This same material was used for the doors, boot, and bonnet for most of the cars in the Rover P4 Series – until replaced by steel, largely on grounds of cost, towards the end of the production run.) 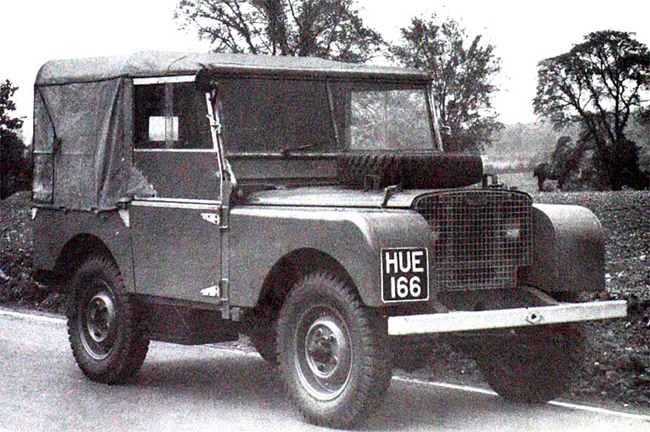 The Land Rover made its public debut on 30th April 1948 at the Amsterdam Motor Show, with production commencing at Rover’s Solihull plant four months later.  Rover initially saw the vehicle as a temporary stop-gap measure; but it quickly began to outsell Rover’s passenger cars, and by 1950 had become the company’s mainstay.

Although the Land Rover was originally targeted at farmers and rural communities, its potential for use in many other industries and services was soon spotted.

Over the next 68 years (until early 2016) the Land Rover steadily developed in almost every respect: a longer wheelbase, new engines, revised suspension, new gearboxes, improvements to the interior, and major modifications to the bodywork, while still managing to retain the underlying identity of the original vehicle. 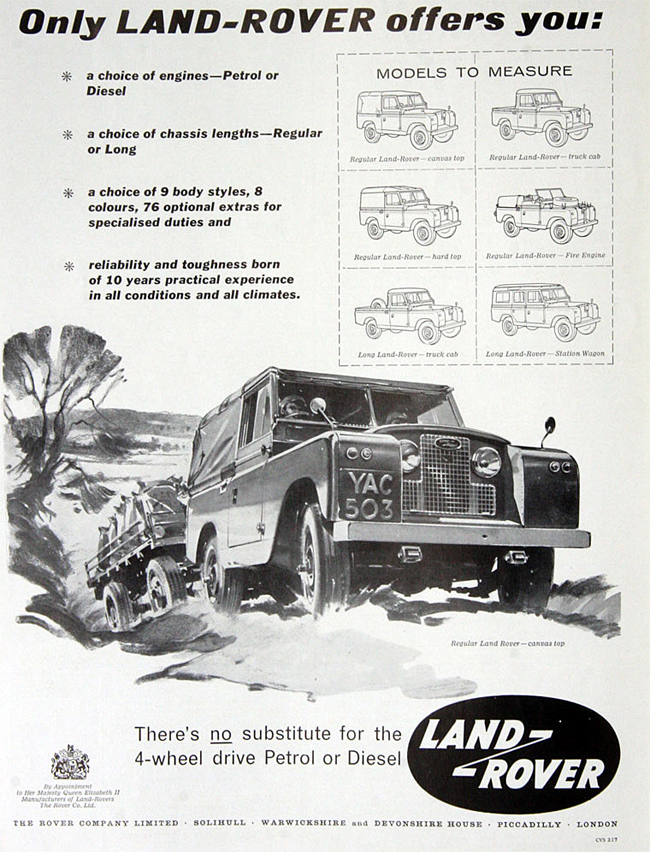 The Land Rover evolved (from 1948 – 1983) through three major Series before the introduction of the updated 90, 110 and 127 models (with coil suspension replacing the leaf springs).  In 1990, following the launch of the Land Rover Discovery, the traditional Land Rover became known as the Defender, still available with three different wheelbases.

The final Defender (believed to be a soft-top 90) was completed on 29th January 2016.  Its replacement has yet to be announced, but later in 2016, Land Rover announced the launch of the Land Rover Reborn programme; the restoration of 25 Series 1 Land Rovers, undertaken by engineers who had previously worked on the Defender production line.

With thanks to James Taylor for his help in preparing this article.

South east of the village of Bennlech, Anglesey.

Where Maurice Wilks, & his brother Spencer, reputedly sketched out their initial ideas for the first Land Rover.