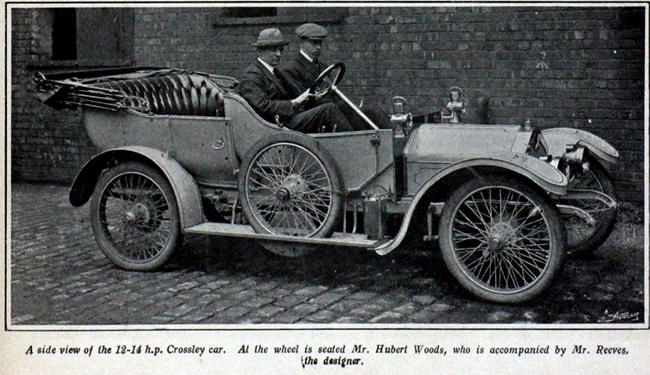 A pioneering engineering company that produced a wide range of vehicles including both luxury and light cars, commercial and military vehicles, buses, and the experimental Streamline.

Commentary
The roots of Crossley Motors go back to 1867 when Francis Crossley bought an engineering business from John Dunlop, also of Manchester, making pumps, presses and small steam engines.

In 1881, Crossley Brothers became a private limited company, and moved from Great Marlborough Street to Pottery Lane, in Openshaw, on the eastern side of Manchester.

The company’s growth continued with the manufacture of its first Diesel engine in 1898, and by the turn of the century it had also begun to make petrol engines.

Crossley began to build their first car in 1903, first exhibited at Crystal Palace in February 1904.  However, in 1906, they separated car production from the rest of the company’s business with a new vehicle division, known as Crossley Motors.

In 1907, car manufacture was moved to Napier Street (later known as Crossley Street) in Gorton, and then to Gorton Lane shortly before the outbreak of the First World War.

Early Crossleys tended to be large, luxury cars with engines of between four and seven litres in capacity.  The most successful was probably the 4-litre 20/25 hp model, first supplied in 1913 to the newly-formed Royal Flying Corps.  Using a range of bodies, the Crossley chassis was widely adopted for military use in the production of vans, trucks and armoured cars.  However, Crossley’s military connections gave the cars a mixed reputation.  Their use by the Black and Tans in the suppression of revolutionary forces in Ireland, gave them a particularly sinister quality in some people’s eyes.

Two Crossley 25/30s, a derivative of the 20/25, were the first vehicles, in 1924-1926, to travel between Cape Town and Cairo.  Known as the Court Treatt Expedition, the journey is described in detail on the Crossley Motors website.

Throughout the Twenties and Thirties, Crossleys retained an air of quality and attention to detail.  The luxury models continued to find favour with the British Royal Family, as well as the Kings of Spain and Siam and the Crown Prince of Japan.

At times their closest competitors were revered makes like Bentley, Vauxhall and Lagonda, but the company seemed unable to produce cars in sufficient numbers to generate a significant profit.

From the mid-1920s, Crossley began to focus more on smaller vehicles than they had done in the past, and this trend that continued into the thirties with the 1100cc and 1500cc Regis model.

Despite some modern innovations, such as the rolling road test facility at the Gorton Lane factory, Crossley’s never embraced mass production techniques in the manner of other manufacturers.

The company’s financial position was not helped by its involvement in a number of unsuccessful projects.  These included a merger with Avro in 1919, a joint venture in nearby Stockport with the US manufacturer Willys, and the development of the Crossley Streamline, based on the original Burney design.

Crossley Brothers, however, continued to produce large Diesel engines for marine, rail, and other applications.  Following financial difficulties in the early 1960s, the business moved into the hands of a number of other companies, and was eventually taken over by Rolls-Royce, as part of its Industrial Power Group.  The original Crossley works on Pottery Lane were demolished in 2009.

There are Crossley cars on display at the Manchester Museum of Science and Technology, the RAF museum at Hendon and the UK National Motor Museum, at Beaulieu in Hampshire.

A pioneering engineering company that produced a wide range of vehicles.