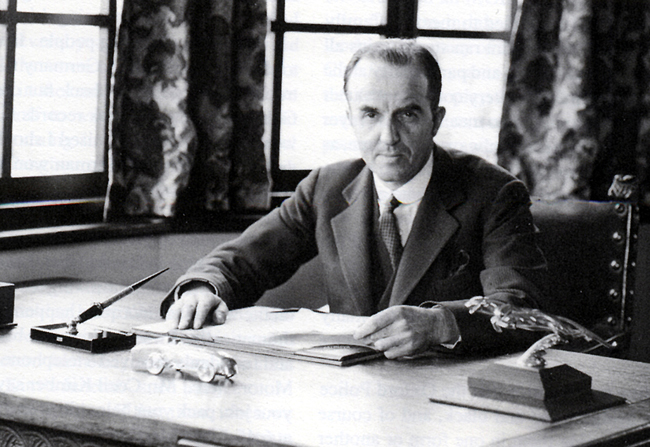 Commentary
Cecil Kimber developed the first MG in 1923, but was dismissed from the MG Car Company Ltd. over a management issue by the chairman, Lord Nuffield, in 1941.

For a short while Kimber went to work for Charlesworth Bodies of Much Park Street, Coventry, but in late 1942 moved to Specialloid, a piston manufacturer, based in Friern Park, north London.

On 4th February 1945, Cecil Kimber boarded the 6pm Leeds train at King’s Cross, bound for Peterborough; where he was due to attend a meeting the following day at Perkins Engines.

It was raining very hard as the train departed up the slight incline at the end of the platform, and the wheels of the locomotive failed to grip the rails.  Still in the station tunnel, the driver was forced to stop the train, but in the darkness failed to realise that the locomotive and carriages were beginning to slip backwards.

The points, however, had already been switched in preparation for the next train leaving that section of the station, and when a signalman realised that the Leeds train was beginning to slip back, he switched the points to avert a collision.

However, the last coach had already crossed the points before they were changed, so that the train was now running on two tracks.  The rear carriage overturned almost immediately, and collided with a signal gantry.  Twenty five people were injured, but Cecil Kimber and Cecil Kirk, from Blackpool, both in the last carriage, were the only two people to die.