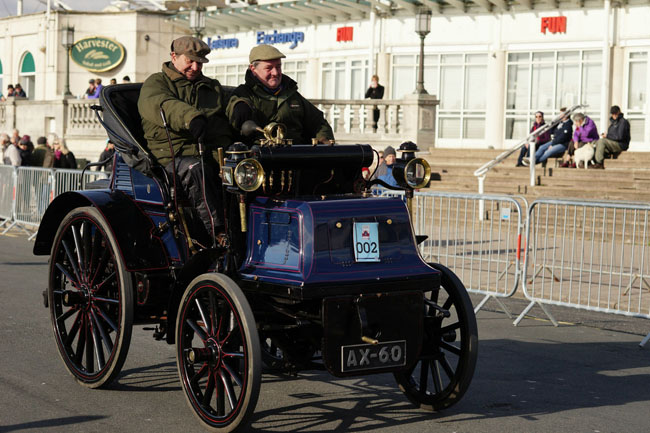 A re-enactment of the 1896 run celebrating the raising of the speed limit from four to 14 mph.

Commentary
On Saturday, November 14th 1896, Lawson’s Motor Club organised the Emancipation Run to celebrate the passing into law of the Locomotives on the Highway Act 1896.

Prior to this, the law had required cars to be preceded by a man on foot (not, however, carrying a red flag; this requirement had been overturned a number of years earlier, in 1878).  The new Act abolished this and raised the speed limit from four to 14 miles per hour.

The first formal re-enactment of this event took place in 1927, organised by the Daily Sketch; and the run has been repeated every year since then, apart from the War years and 1947, when petrol rationing was in force.

Today the event is held on the first Sunday in November, with the cars driving from Hyde Park in London to Madeira Drive, Brighton.

A re-enactment of the 1896 run celebrating the raising of the speed limit from four to 14 mph.