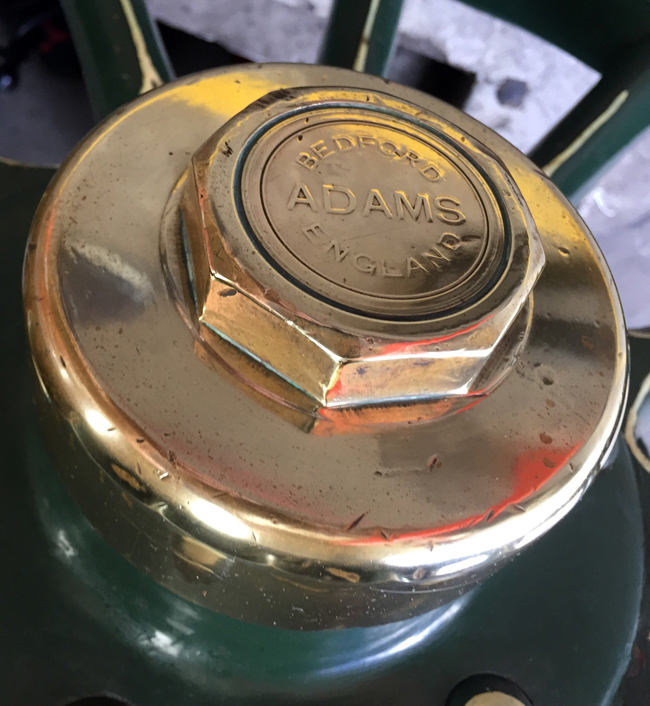 Commentary
The Adams Manufacturing Company was first registered on 1st April 1905.  Six months later, the factory on Elstow Road, designed with a test track to run round the main building, was nearing completion.  By the end of the year, the company had built its first car.

However, the Adams story really begins not in Bedford, but more than 3,000 miles away on the north-eastern seaboard of the USA, the birthplace of Edward Hewitt and Arthur Adams.

Edward Ringwood Hewitt was born in New Jersey in 1866, into a wealthy and successful family. His grandfather, Peter Cooper, had built the first American steam locomotive, helped fund the laying of the first transatlantic telephone cable, and earnt a fortune manufacturing gelatin and glue from horses’ hooves. His father and uncle both served as Mayor of New York City, and his sisters, Sarah and Eleanor, went on to establish America’s first design museum.

Edward himself studied chemistry at Princeton University and the University of Berlin.  He then spent a number of years travelling and working in Europe, including a period, in the mid-1890s, working with Hiram Maxim on the development of a steam-powered aircraft in the grounds of Maxim’s home near Bexley in Kent.

Arthur Henry Adams was born in Boston, Massachusetts in 1868.  After gaining a degree in mechanical engineering at Massachusetts Institute of Technology, he joined the Western Electric Company, later moving to Paris to work on the installation of the City’s telephone system.  It was here that he met his wife, Gertrude Edwards, a singer originally from Texas, and it was possibly through her family connections that he met Edward Hewitt.

In 1899, Harry Adams, as he was known, left Western Electric and moved to London, joining the Sturtevant Engineering Company, manufacturing fans and air handling equipment. 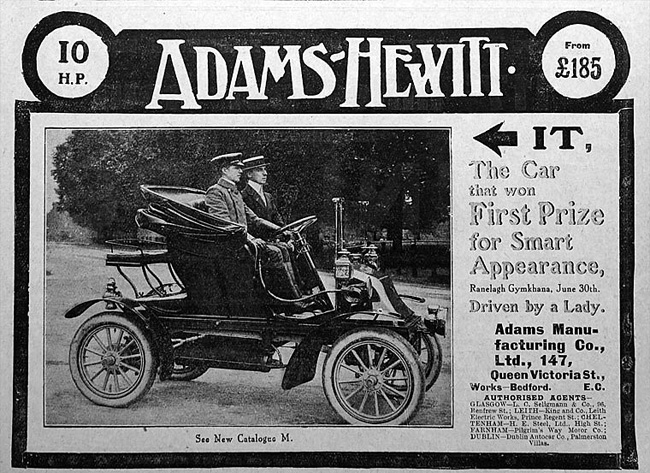 In the meantime, it appears that Edward Hewitt had started to work on a design for a car, and – probably around 1904 - established a partnership with Harry Adams.  It was in that year that Hewitt lodged ten automobile patents, first in the US, and then, a couple of months later, in the UK.

The first Hewitt cars were made in an old livery stable between Madison Avenue and Fifth Avenue in New York, close to the Hewitt family factory. However, it was not long after production began in the US, that the new factory on Elstow Road was opened. 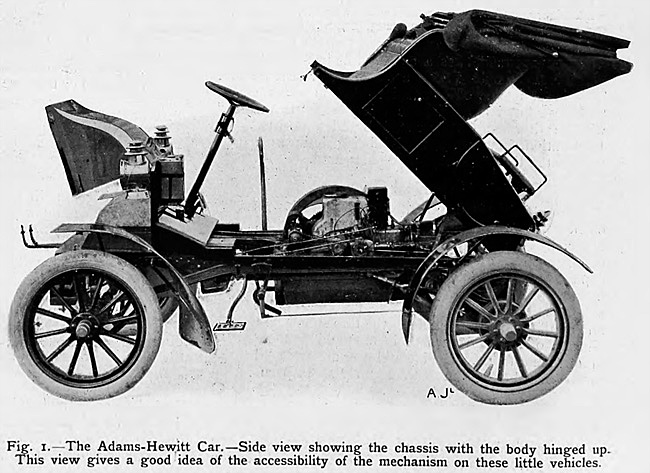 The British car, initially called an Adams-Hewitt, bore a close mechanical resemblance to Hewitt’s US “Town Car”.  In fact, as Gordon Brooks has noted “when Harry Adams decided to build his automobile, he probably copied the Hewitt mechanical design down to the last nut and bolt”.

With a single-cylinder, ten h.p engine, mounted beneath the driver, the Adams-Hewitt was praised for its simple, but thoughtful, construction.  In May 1906, the Automotor Journal reported: “There is hardly a point in the whole design which does not give evidence of having been, as it were, re-thought out, the result of this careful consideration being that the chassis presents many features of unusual interest.”

Among these was the epicyclic or planetary two-speed gearbox. Praised for its simplicity, speed-changing (as it was then known) was performed entirely by pedals.  Reference to this often appeared in company’s advertisements, with the words “only pedals to push”.  By simply pressing the high, low, or reverse gear pedal, drivers were relieved of the difficult job of trying to smoothly engage gear.

By 1907, the Bedford-made cars were being marketed as Adams – possibly reflecting the termination of an initial agreement for the manufacture of engines, gearboxes and back axles to be shared between Hewitt in the United States, and Adams in Britain. 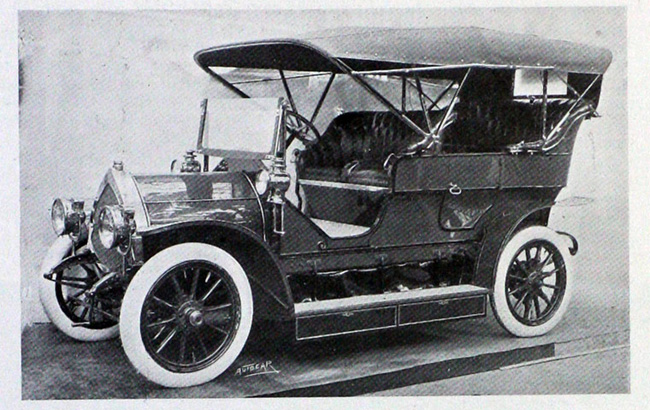 Over the next five years, the company introduced a number of further models, with two-, three-, four, six-, and eight-cylinder engines, along with taxicabs, vans and larger delivery vehicles.  Such was the range of models on offer that Marcus Hunter, chief designer for Adams (and later Cheswold in Doncaster) is recorded as saying after he left the company that he had designed so many cars that he was unable to recall them all.

Despite, or perhaps because of this, Adam’s reputation for innovation continued.  In 1911, they developed a self-starting mechanism using compressed air from an air pump fitted to the crankshaft. (It could also be used to operate a hydraulic jack and, with a suitable connection, to inflate a tyre.) 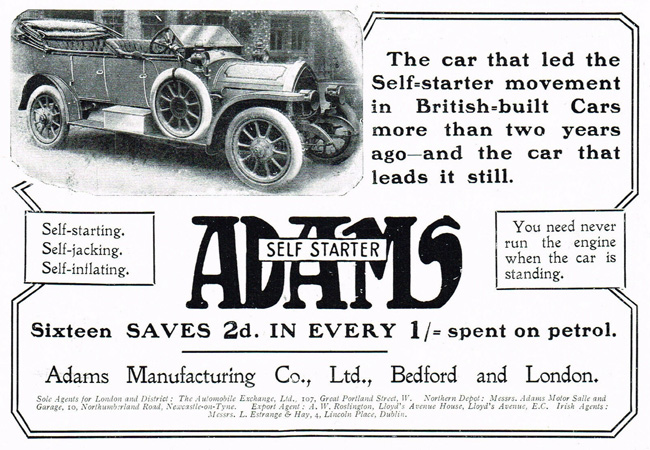 However, it is around this time that reports indicate that the company was having problems with capital and cash flow.  Perhaps indicative of this, Adams’ London showroom (106, New Bond Street) was closed in 1911, and in 1913 the business went into voluntary liquidation.

However, during all this time, the Adams Manufacturing Company had not only produced motor vehicles at the factory in Bedford, it was also manufacturing electrical switch gear.  When car production ceased, the business was re-named the Ingranic Electric Company and turned over entirely to the manufacture of electrical components.  This continued under different ownerships until at least 1990. 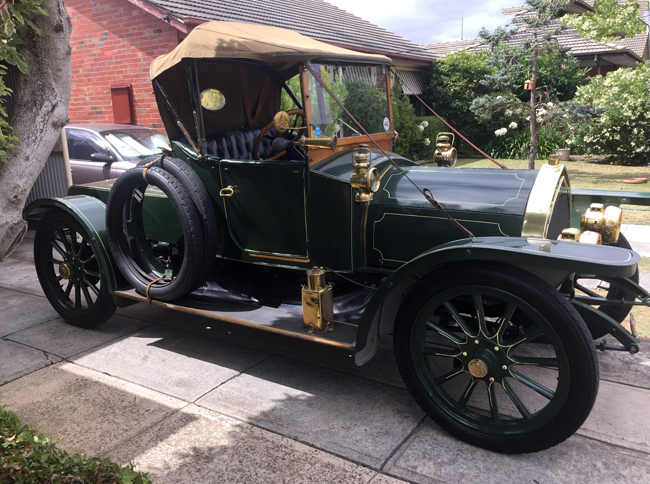 But what of Edward Hewitt and Harry Adams?  By 1907 Edward Hewitt had turned his attention to the production of trucks, rather than cars.  In 1912, the Hewitt Motor Company was absorbed by the International Motor Company, manufacturers of the Mack truck, with whom Hewitt retained close links for at least another 30 years.

His other great claim to fame was his interest and competence in fishing, particularly in relation to the development of fly-fishing techniques and equipment, and the management and conservation of trout streams. 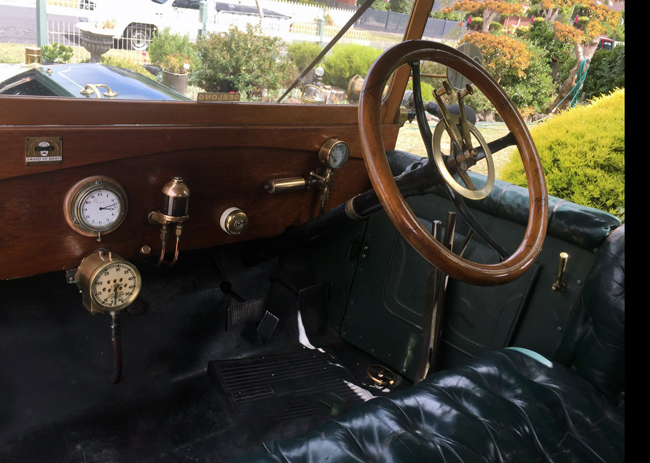 There is some uncertainty as to Harry Adams whereabouts after his company's closure.  One source (Peter Engberg-Klarström, see below) states that he moved to London as British representative  of the United States Rubber Company (today known as Uniroyal).

In November 1914, Adams travelled to New York, where he was joined five months later by his son William, a student at Trinity College, Cambridge.  For their return trip to England, the father and son booked two cabins on RMS Lusitania, a luxury British ocean liner that was, at one stage, the largest ship in world. 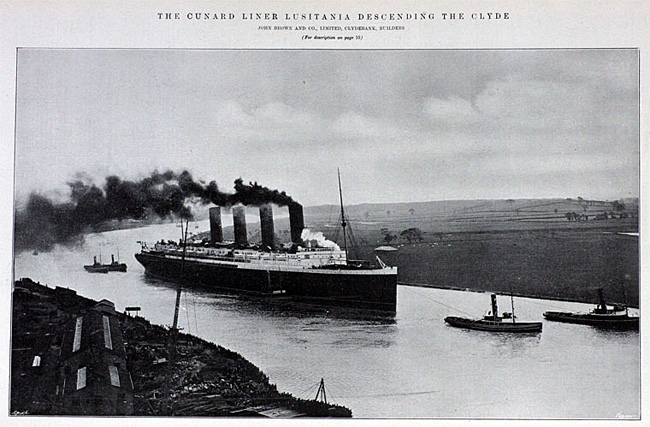 On May 7th 1915, six days out of New York, and within sight of the coast of Ireland, the Lusitania was torpedoed by the German submarine, U-20. Shortly after the torpedo hit the liner, there was a second explosion on board, and the ship quickly listed to starboard and began to sink.  The boat’s position in the water made it almost impossible for passengers to gain access to the lifeboats and for the boats to be safely lowered.  Harry and William Adams, like many passengers, tried to save themselves by jumping straight into the water.  William survived, but Harry Adams’ body was never recovered.  A total of 1,197 passengers and crew lost their lives.

A 1907 Adams Phaeton is on display at the Higgins Art Gallery and Museum, Bedford.

I am very grateful to Gordon Brooks, Simon Anderson, and the Western District Historic Vehicle Club,  for their help in the preparation and illustration of this article. 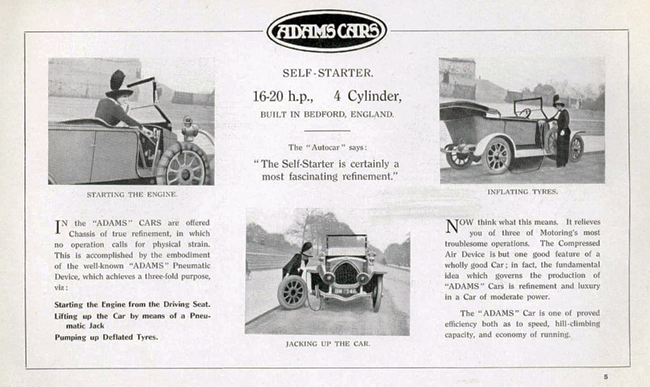