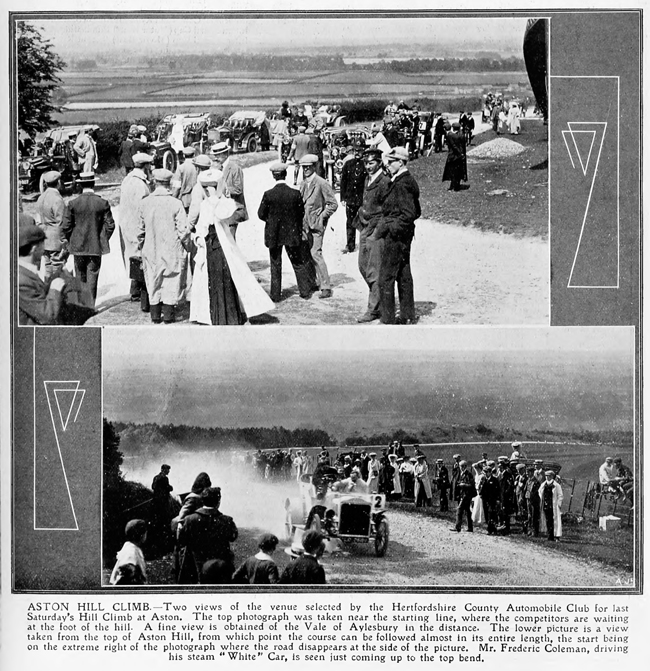 A popular hillclimb location for more than 20 years, and the place from which the name of Aston Martin is partly derived.

Location
A public road, just off the B4009, between Tring and Wendover, signposted to St Leonards.

Commentary
The hillclimb route was first used in 1904 on a public road running through land belonging to the estate of Alfred de Rothschild.

The road closed for hill climbs in 1925 after the Competitions Committee of the RAC decided not to issue any more permits for “high speed contests on the public highway”.  There was increasing concern over the failure of spectators at motor sport events to follow marshals’ instructions.  Hillclimbs on public roads had already been banned in a number of counties, following a court case in which a spectator was awarded damages for injuries suffered by a competing motorcyclist.

Today Aston Hillclimb is remembered particularly for its connection with Aston Martin, and its link to the creation of the company’s name.

Aston Martin was founded by Lionel Martin and Robert Bamford.  They jointly owned a garage business in Kensington and entered their modified Singer 10 in various hillclimb events.

Their ultimate goal, however was to produce their own car, and when this finally came in 1915, they chose the name Aston-Martin (although the company itself was registered as Bamford and Martin Ltd).

On his website, astonmartins.com, Tim Cottingham states that including the name of the hillclimb was suggested by Lionel Martin’s wife Kate, as a means of linking the car to a popular sporting event and because she believed that the name of Aston would ensure its appearance near the top of any alphabetical list of car makers. 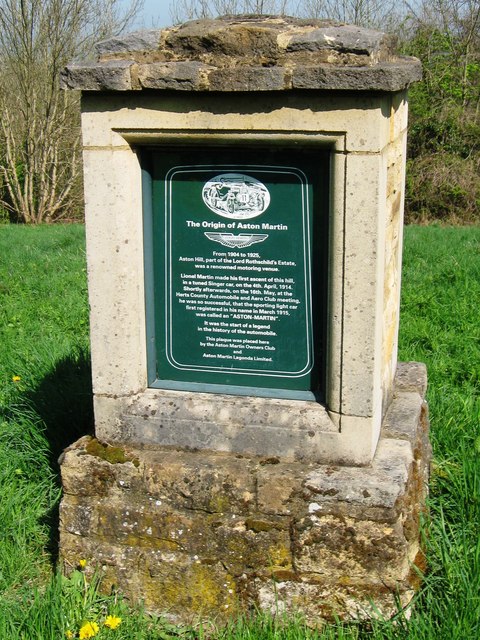 A monument recording the area’s connection with Aston Martin has been placed on the side of the road at the top of the hill.  It reads:

"From 1904 to 1925, Aston Hill, part of Lord Rothschild's Estate, was a renown motoring venue.  Lionel Martin made his first ascent of this hill in a tuned Singer car, on the 4th April, 1914. Shortly afterwards, on the 16th May, at the Herts County Automobile and Aero Club Meeting, he was so successful that the sporting light car first registered in his name in March 1915 was called an “Aston-Martin”. It was the start of a legend in the history of the automobile.  This plaque was placed here by the Aston Martin Owners Club and Aston Martin Lagonda Limited."

A public road, just off the B4009, between Tring and Wendover, signposted to St Leonards.

A popular hillclimb location for more than 20 years, and the place from which the name of Aston Martin is partly derived.