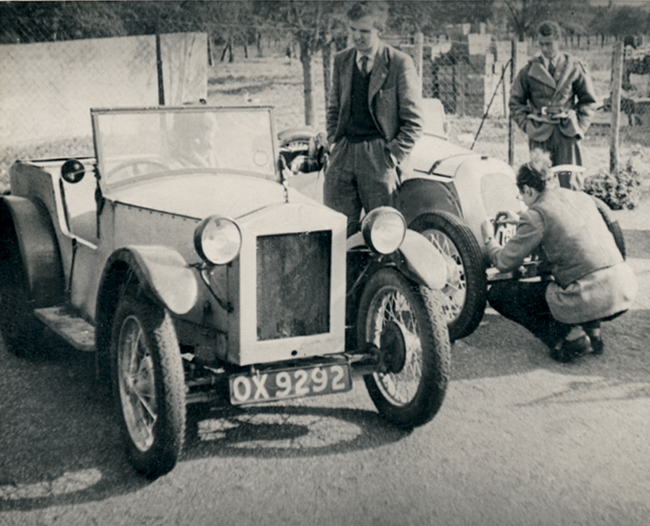 The location for the development and construction of the first Lotus cars.

Commentary
Colin Chapman was born in 1928 in Richmond, Surrey.  While at university, studying engineering at University College London, he developed a sideline in buying and selling small cars, but changes to the system of petrol rationing in 1947 caused the second-hand market to collapse, leaving Chapman with stock that no one wished to buy.  He was eventually able to sell all the cars, bar one – a 1930 Austin Seven, which he used to make a car of his own.

Using a garage located to the rear of his girlfriend Hazel’s parents’ house on Alexandra Park Road, Colin Chapman replaced the Austin saloon body with an open two-seater made from marine ply and aluminium.

He used the Special for trials events, but by 1950 had re-bodied it and fitted it with a more powerful Ford 1172cc engine. This, it appears was the first car to be given the Lotus name – specifically a Lotus Mk II, with Colin Chapman’s first car being retrospectively called the Lotus Mk I.

The development of a third car began at Alexandra Park Road, but was completed just around the corner in the garage of a large house on Vallance Road, the parents’ home of brothers Nigel and Michael Allen, who also had an Austin Seven Special.

The Allen’s workshop was larger and far better equipped than the garage on Alexandra Park Road, and it was here that the Lotus Mk III and its derivatives were built.

As well as providing the premises, the Allen brothers, who were both students, also worked with Colin Chapman in developing and preparing cars for racing.

Success on the track began to bring in customer requests for their own cars and it was this that, towards the end of 1951, gave rise to a move to larger premises - in Hornsey.

The place where the first Lotus cars were developed and built.