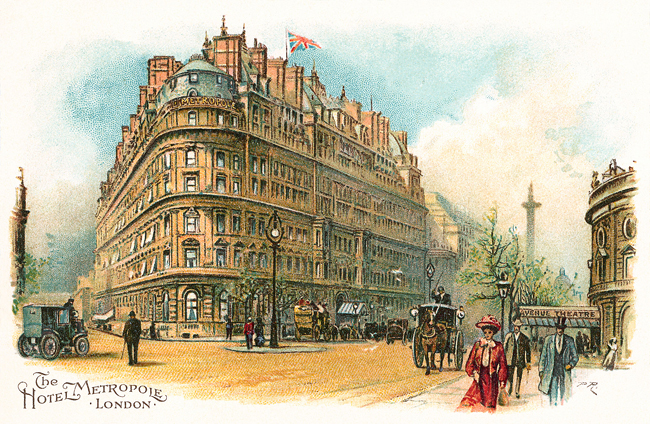 The starting point of the 1896 London to Brighton Emancipation Run, organised to celebrate the repeal of the 1878 Locomotive Act.

Commentary
The pioneers of motoring in Britain faced considerable opposition as they tried to gain wider support for the motor car.   Early motorists were pilloried for the noise and dust thrown up by their vehicles, and for their excessive (and unnatural) speed.  However, probably the greatest obstacle to the development of the car in Britain was a law originally introduced to limit the growth of steam road vehicles and to protect those with a financial interest in the railways. 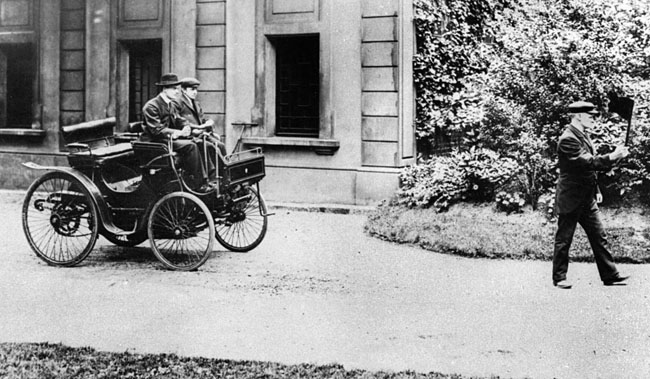 The 1865 Locomotive Act imposed a speed limit on self-propelled road vehicles of two miles per hour in towns and four miles per hour in the country, and required a vehicle to be accompanied by three people, one of whom walked ahead waving a red flag.   Although the latter requirement was placed at the discretion of Local Boards in 1878, the law still acted as a major deterrent to the development of the car.

It wasn't until the mid-1890s that Parliament finally recognised the handicap that this restrictive legislation was placing on many aspects of life in Britain.  On November 14th 1896, the Locomotives on Highways Act became law, creating a new category of light locomotives which no longer required three crew members in attendance.  It also allowed vehicles to be driven at speeds up to 14 miles per hour, although in Scotland the speed limit was set at ten miles per hour. 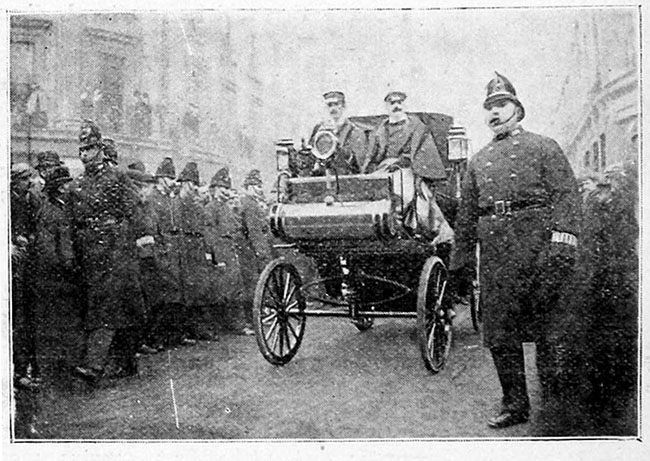 After several days of beautiful weather, Saturday November 14th was foggy, dull and damp.  Fifty-eight entries had been received for the event, although only 33 cars made it to the start; but this did not stop a huge crowd from gathering outside the hotel.  So many people came to see the vehicles move off that, “the crowds not only lined the pavements, but filled the road within a foot or so of the Autocar wheels,” (Autocar, 21st Nov 1896).

“The police, both on foot and on horseback, waged one continual war with the crowd to get the vehicles in position, and to give them a fair chance of starting when the time arrived,” (Automotor and Horseless Vehicle Journal).“

The route took the cars along the Embankment, across Westminster Bridge, through Lambeth, and then south to Brixton; and it wasn’t until they reached Brixton Rise, on the edge of the city, that they began to make any kind of normal progress.

The cars themselves were a varied collection of vehicles.  They included eleven Daimlers, three Léon Bollées, and two Panhard et Levassors (both with Daimler engines).  Perhaps more surprising was the range of vehicles that took part.  A charabanc, a parcels van, a dog cart, a tricycle, and even an electric bath chair, were all among the starters. 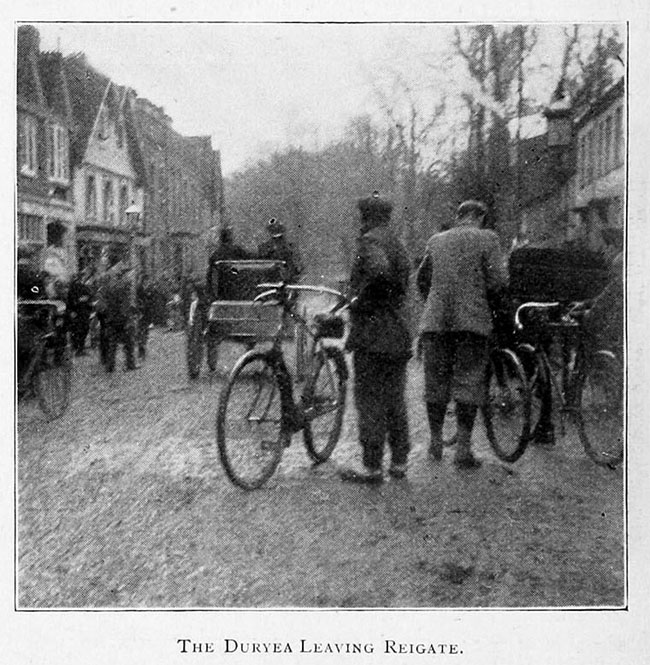 The first car to reach Reigate, just over a third of the way to Brighton, was an American Duryea, driven by Frank Duryea, the company's co-founder.  His passenger was George Thrupp, of the coachbuilders Thrupp & Maberley, and one of the first member's of the Automobile Club.  In second place was M Léon Bollée, driving one of his own tandem tricycles, with his father, Amédée (a pioneer of steam cars), in third place, in a similar vehicle.

Crowds of people continued to line route, but when the cars reached Crawley, about 22 miles from Brighton, the Duryea - almost certainly still in the lead - was involved in an accident in which a little girl was injured as she leaned forward to watch the cars.

From various reports, it appears that the first vehicles reached Brighton at some time between 2.00 - 3.00pm. The official results, listing the 13 cars that arrived before 6.00pm, recorded the two Léon Bollées coming in first and second, and a Panhard omnibus in third place. Interestingly the report in The Times points to the fact that for “some cause or other, the American car was omitted from the official record”.

Today, it seems to be generally agreed that the Duryea was the first car to reach Brighton by some margin, but was deliberately excluded from the list of finishers as it had not been built by one of Harry Lawson’s motor companies.

When it opened in 1885, the Metropole was the largest hotel in Europe, with 600 rooms.  Close to London’s fashionable districts, it catered for the wealthiest visitors, proclaiming, “luxurious suites with bathrooms attached, and a telephone in every bedroom”.

In 1916, the Metropole, along with most of the other buildings in Northumberland Avenue, was requisitioned for accommodation for government staff.  After the War it returned to use as a hotel, but in 1936 was again leased to the Government to provide departmental office accommodation.  The building remained in government hands during and after the Second World War, and is said to have been, at one stage, an operational centre for the British Secret Service. 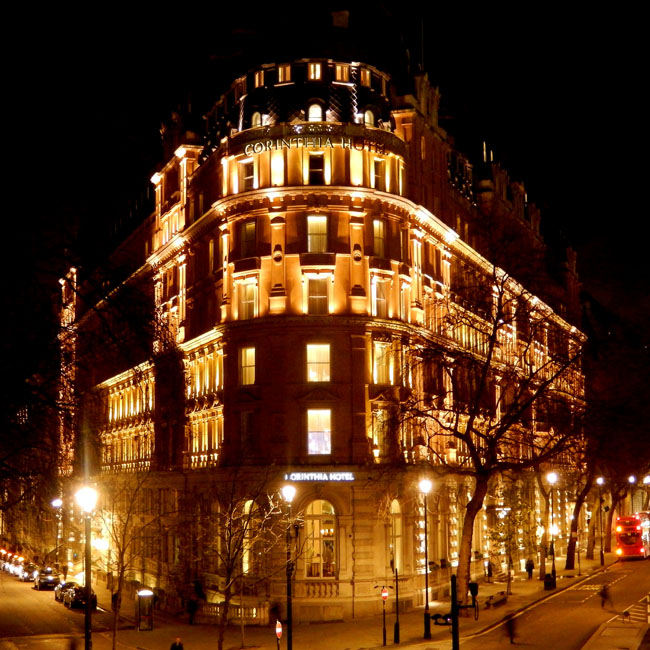 For many years the building remained in the hands of the Ministry of Defence, but in 2008 was put up for sale and bought by the Corinthia Hotel Group.  It was subsequently revamped and upgraded, and is today known as The Corinthia Hotel London.

The starting point of the 1896 Emancipation Run.