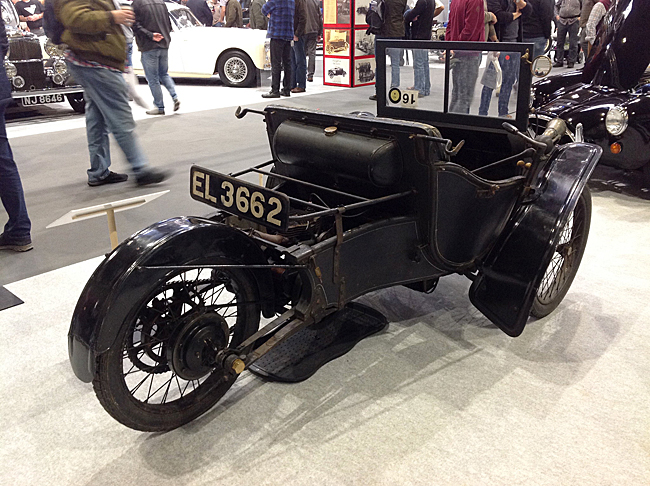 The location for the development and construction of the first A.C cars.

Commentary
One of Britain’s oldest motor manufacturers, A.C was initially created through the work of two men: John Weller and John Portwine; the first an engineer, the second, a butcher.

That part, at least, is fairly straightforward; what is more complicated is the rather circuitous route that this development took, together with the slight uncertainty over the exact location of business's premises.

We know that John Weller, the son of a bookseller, was born in New Cross, south east London, in 1877.  By 1891, his family had moved the few miles south to 173 Selsdon Road in West Norwood, and in 1901 was living at 219 Idmiston Road, a residential street leading off the main thoroughfare through West Norwood.

In 1900 or 1901, John Weller established an engineering business with his elder brother Harry, under the name of Weller Brothers.  A year or so later, in 1902, John Portwine joined the partnership.  He was the owner of a chain of local butchers (The London & Suburban Meat Stores), and it was he who provided the financial backing for the Weller brothers, enabling them to build their first motor bicycle and car. 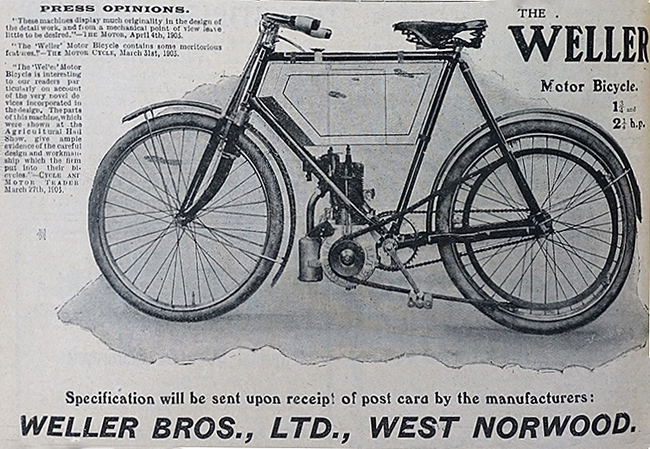 The Weller motor bicycle was made between 1902 and 1904, and Weller’s first cars were exhibited at the 1903 Crystal Palace Motor Show.  With two stands at the exhibition, Weller Brothers are listed as showing nine motor bicycles, together with a 10 h.p and a 20 h.p car.

It has not been possible to track down any information about the smaller car, but details of the more powerful version are well documented - a design that was well ahead of its time.  In order to reduce the transmission of vibration from the chassis to the drive unit, the four-cylinder, 20 h.p engine, together with the gearbox, silencer, and radiator were together mounted on a separate subframe, suspended from the main chassis.  In a six-page review of the car, Autocar stated: “… in all details of the Weller car, there is food for much reflection…. We foresee a brilliant future for the car and its talented designer.” 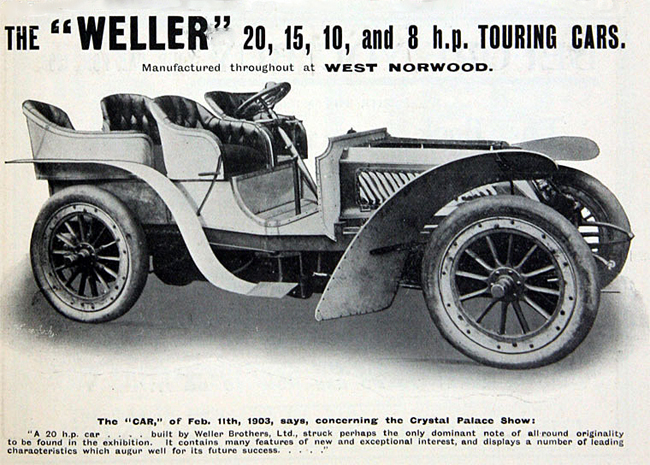 Despite this acclaim, only one Weller car appears to have been made.  The difficulties of larger scale production indicated that the project would not be economic and, with costs mounting, John Portwine proposed that they should instead focus on the cheaper end of the market.

He suggested that something small and practical might have greater sales potential – perhaps a simpler vehicle for the commercial market.

The outcome was a three-wheel delivery vehicle with a 5.6 h.p air-cooled single-cylinder engine and a chain drive to a single rear wheel.  As on the original Weller, the engineering was of the highest standard, ensuring that the vehicle was robust and reliable.  The main frame was made of ash, reinforced by birch panels, once again supporting a tubular steel frame on which the engine was mounted.  Steering was via a hinged tiller, and the two-and-a-quarter gallon petrol tank gave the driver a range of between 75 and 100 miles.

The Wellers called the new vehicle the Auto-Carrier and founded a new company, Autocars and Accessories Ltd, for its manufacture. 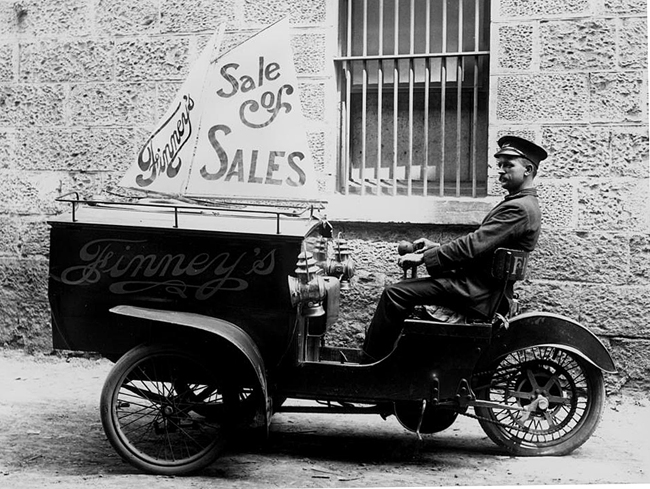 Launched in 1904, the Auto-Carrier found an immediate market, and was taken up by many of the big London stores and businesses throughout Britain.  It was built at two adjacent sites in West Norwood, less than 100 yards apart: in buildings on the northern side of Thomas Place and at 158a Norwood Road.  Confusingly, properties on Norwood Road were re-numbered in 1913, and Thomas Place re-named Waylett Place.  This means that the former 158a Norwood Road is now 300 Norwood Road, and in 2021 was a Texaco service station.

Looking at both sites today, it is difficult to decide precisely where the Autocars and Accessories workshops might have been situated.  Waylett Place and the area behind the service station still contain a number of small industrial buildings.  This could well have been the main factory area, with the offices and showroom fronting on to the main road.

In 1907, the company introduced a passenger variant of the Auto-Carrier together, once again, with a change in the company name to Autocarriers Ltd.  Known first as a Tricar, and later as a Sociable, the earliest models had the passenger sitting in the cargo space, directly in front of the driver.  However, the design was soon modified to allow driver and passenger to sit side-by-side.  A three-seater variant was also offered, with the driver sitting at the rear, above the engine.

The Auto-Carrier and the two-seater Tricar were each priced at £85, with the three-seater costing £10 extra.  It was on the Tricar, in 1907, that the abbreviation A.C was first used.

Part of the Auto-Carrier’s sales’ success almost certainly lay in its adaptability: it competed, with some success, in motor sport (driven by John Portwine himself), and was also modified for military purposes, as a troop and machine gun carrier.  Coincidentally, Hiram Maxim, inventor of the first automatic machine gun, lived less than a mile away from the Auto-Carrier factory, at Thurlow Park, West Dulwich. 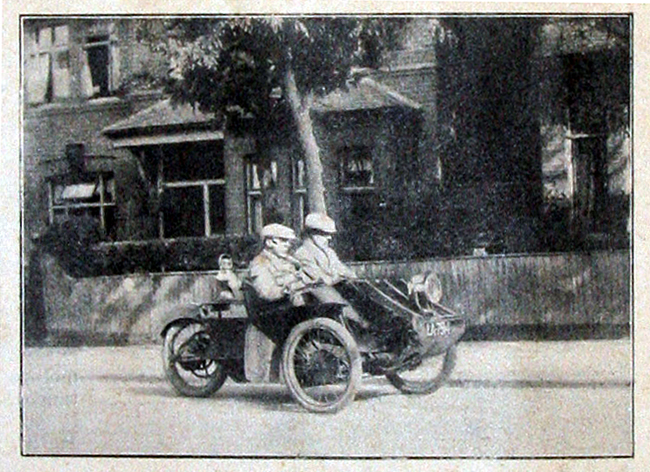 It is likely that around this time, and certainly by 1909, that Autocarriers took on an additional premises about half-a-mile away at 42a Martell Road, probably located behind today's 42-58 Martell Road.  However, the popularity of the little three-wheeler, for both private and commercial purposes, meant that still more space was required.  In 1911, the company was once again on the move, this time to a former Victorian engineering works at Thames Ditton, in Surrey.

Several sources indicate that between 1907 and 1909 a motor dealer, Douglas S Cox, also traded from Thomas Place (possibly 10a).  He is also credited with manufacturing the Emerald car, a light two-seater voiturette (1903-04), and later the Osterfield (1907-09), which reportedly was produced in four, six, and eight-cylinder versions.  Reference to an Osterfield Tri-car has also been found in a sales catalogue for an auction held in Isleworth, Middlesex in October 1918.
With thanks to Stuart Hibberd of the Norwood Society for his help with this article, www.norwoodsociety.co.uk.

The location for the development and construction of the first A.C cars.