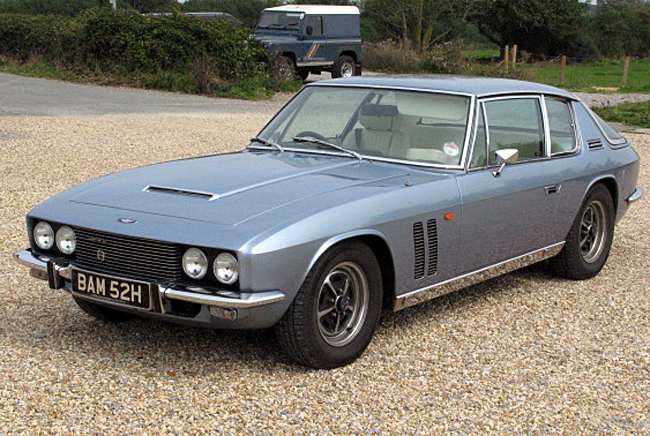 Originally a specialist coachbuilder, Jensen developed into a manufacturer of sports cars and grand tourers.

Commentary
In 1931, after a very short association with Patrick Motors of Birmingham, Richard and Alan Jensen joined the long-established coachbuilding firm of WJ Smith & Son of West Bromwich, which specialised in the production of bodies for commercial vehicles and buses.

The brothers’ main responsibility at Smith’s was to update the company’s rather old-fashioned production methods, but it appears that it wasn’t long before they were, once again, building their own special bodies for Wolseley, Singer, Morris, and Ford chassis.

In 1934, they established Jensen Motors and, two years later, the name of WJ Smith & Son Ltd was also changed to Jensen Motors Ltd.  Over the next five years, the company increasingly focussed on the production of large, luxurious cars, notably with models based on the new Ford V8 chassis and a 4½-litre straight-eight American engine produced by Nash.

Despite the move into the luxury car market, Jensen retained a strong interest in commercial vehicles.  In the mid-30s, the company responded to a request by the Reynolds Tube Company to produce a purpose-built lorry to carry long tubes and extrusions.  The result was a revolutionary lorry, with a lattice light alloy frame, described by David Scott-Moncrieff in 1963 as being able to carry “a greater volume of payload than anything built before or since.”

With the outbreak of war, Jensen undertook contracts for the production of ambulances, fire tenders, aircraft seats, and tank turret turntables.  In November 1940, the Shaftesbury Street factory was damaged in a bombing raid on West Bromwich.

During the War, Jensen also tested and developed a small articulated truck, first built as a prototype in 1939.  Known as the Jen-Tug, it was in full production by 1946.  Manufacture of this and Jensen’s other commercial vehicles (commonly marketed as JNSN) was moved to Stoke in 1947 and later, from 1951, to Kingswinford, also in Staffordshire.

Jensen car production also resumed after the War with the aluminium bodied PW saloon.  This was launched in 1946 but, following its announcement, there were serious teething problems with the engine, a new 3.8-litre straight-eight-cylinder unit, specifically designed for the car by Henry Meadows Ltd.  A rethink was clearly required, forcing Jensen to install some of the remaining Nash engines from before the War, and also to look for a longer term replacement.

In 1947, the Austin Motor Company released the Austin Sheerline.  This too was four-door luxury saolon, but one that bore a striking resemblance to the PW.  An angry Richard Jensen confronted Austin’s managing director Leonard Lord over this.  After some discussion, Lord offered to supply Jensen with the Sheerline’s new 3.5-litre six-cylinder engine, solving at a stroke Jensen’s search for a replacement engine, and inaugurating a long period of co-operation between the two companies.

By 1949, Jensen was offering a second model, the Interceptor; a two-door long-distance tourer, again using an engine and chassis supplied by Austin. The design of the new car, by Eric Neale, was very much admired by Leonard Lord who asked Jensen to submit a proposal for a smaller sports car based on Austin’s current A40 saloon.  The A40 Sports, as it became known, was in many ways a smaller version of the Interceptor.  Both were made of aluminium panelling on a steel chassis, although the Interceptor was unusual in having its boot lid made from the relatively new material of fibreglass.

Over its three-year life span more than 4,000 A40 Sports bodies were made by Jensen at Carters Green.  With the announcement of the Austin-Healey 100 in 1952, the company’s collaboration with Austin continued when Jensen secured the contract to supply bodies for the new car.  Jensen Motors produced a total of 64,500 Austin-Healey bodies until the big Healey was discontinued in 1967.

Towards the end of 1953, a new Jensen was announced - the 541 series; retaining the Austin engine but clothed in a body of sublime beauty, and manufactured largely in fibreglass, with Perspex side and rear windows.  The 541 De-Luxe was the first British production car to be fitted with disc brakes on all four wheels.

In autumn 1954, Jensen began work on a new factory on the south side of West Bromwich on Kelvin Way, and it was here that the 541’s replacement the Chrysler-engined CV8 was built, along with its successor, the second Interceptor, possibly the most famous Jensen of all.

As well as the development of their own models, Jensen continued with contract work for other manufacturers.  In 1960, they secured an agreement to finish the bodies, and paint and assemble the Volvo P1800 coupé. Jensen also helped to develop and then assembled the Ford V8-engined Sunbeam Tiger, manufactured in West Bromwich from 1964-1967.

The decision to adopt an Italian design for the new Interceptor, launched in 1966, led to the departure of Richard Jensen (his brother had already retired on health grounds) and Design Director, Eric Neale.

However, the loss of external contracts during this period increased the company’s financial difficulties and, in 1970, Jensen passed largely into the hands of Kjell Qvale a major car distributor based in San Francisco.

Faced with British Leyland Motor Corporation’s decision to discontinue the Austin-Healey, Donald Healey and his son Geoffrey decided to begin work a new sports car.  They were soon approached by Kvell Qvale and the outcome of this collaboration was the Jensen-Healey, which was launched in 1972.

Early Jensen-Healeys were beset with problems; these, together with the impact of the 1974 oil crisis on sales of the Interceptor placed Jensen further in jeopardy.  In 1976 the company went into liquidation.

The original factory on Kelvin Way was demolished in 1976, but in 1983 an attempt was made by former company employee, Ian Orford, to restart production of the Interceptor in what was the factory's service section, but this was not a success, and the Kelvin Way site closed for good in 1992.

In 1993, Martin Robey, a manufacturer of Jaguar body spares,  bought the remaining Jensen assets and transferred the business to his centre in Nuneaton, Warwickshire, where Jensen servicing, replacement parts, and restoration are available.

A further attempt was made to revive the Jensen marque in 1998, with a Ford-powered roadster, known as the S-V8.  However, by the time the company closed in 2002, just ten cars had been produced.

Since 2010, Jensen International Automotive, based at Thame in Oxfordshire has specialised in refurbishing and extensively upgrading Interceptors from the 60s and 70s.

In 2011, an announcement was made by CPP Holdings of its intention to build a new Interceptor at the Browns Lane site in Coventry.  In 2015, the Jensen Group revealed the design of its proposed Jensen GT, with the intention of the first models becoming available in 2016.

Jensen - a manufacturer of sports cars and grand tourers.