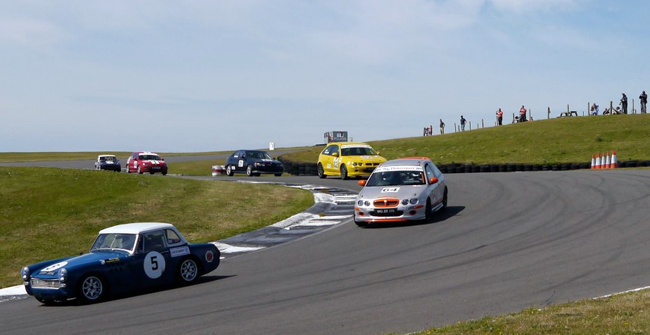 A relatively new track which, with its clifftop location, is probably one of the most picturesque racing circuits in the country.

Commentary
According to the motor magazine, Autosport, the Anglesey Circuit was created from a conversation between Richard Peacock, then owner of the Kirkistown Racing School in Northern Ireland, and Michael Douglas, manager of the Bodorgan Estate.  The plan was to construct a circuit for both cars and motorcycles utilising some of the roads on the former military base.

Racing commenced on the 1.067-mile circuit in July 1997. However, in 2006 work began on the complete re-development of the track creating four distinct layouts on a reconfigured circuit.  Racing re-commenced in 2007, and today the circuit is used for club motorcycle and car racing, rallycross, track days, and the British Sprint Championship.

With thanks to the MG Car Club for the use of the image.

Probably one of the most picturesque racing circuits in the country.