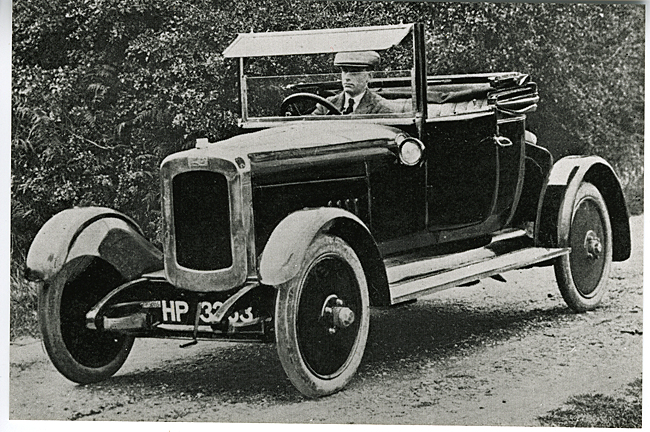 An early motor manufacturer that produced one of the first cars designed specifically with women in mind.

Commentary
Galloway Motors Ltd was founded in 1920 as a subsidiary of  Arrol-Johnston.  The Galloway was designed by Dorothée Pullinger, a pioneering female engineer, and advertised as ‘a car built by ladies for those of their own sex’. 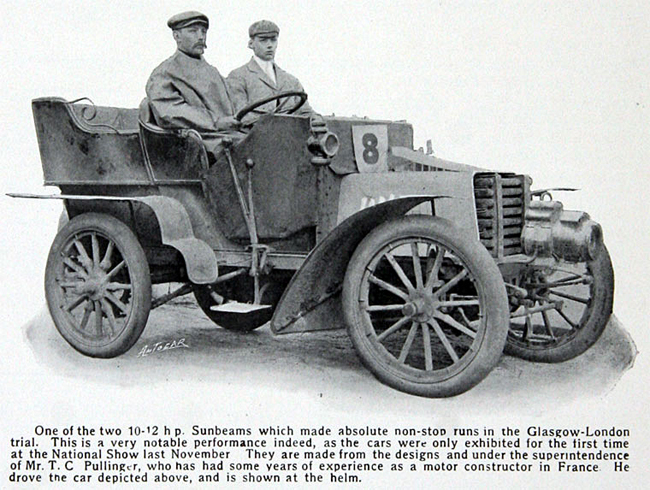 Dorothée Pullinger was born in France in 1894.  Her father, Thomas Pullinger, brought up in Bexleyheath in Kent, was a successful car designer; working in France for Darracq, before returning to England to join Sunbeam, Humber, and then Arrol-Johnston in 1908 as their general manager.

Until Dorothée’s arrival in England at the age of eight, she had spent her entire life in France and knew relatively little English.  But what she lacked in language skills, she more than made up for with her interest in and understanding of machines.

Engineering was her passion, almost from the start; and it was no surprise that when Dorothée left school at 16, what she most wanted to do was to start an engineering apprenticeship with Arrol-Johnston - which her father duly arranged.

In 1913, Arrol-Johnston moved from Paisley to Heathhall, near Dumfries, into a modern, purpose-built factory.  However, with the outbreak of war a year later, the company switched from civil to military production, and Dorothée found herself working on aircraft, rather than cars.

In 1916, Dorothée was approached by the armament manufacturer Vickers to supervise a largely female workforce at their munitions factory in Barrow-in-Furness, Cumbria.  Her extensive technical knowledge, together with fluency in both English and French, made her almost uniquely qualified for this role, overseeing 7,000 workers, many of whom were French and Belgian refugees. 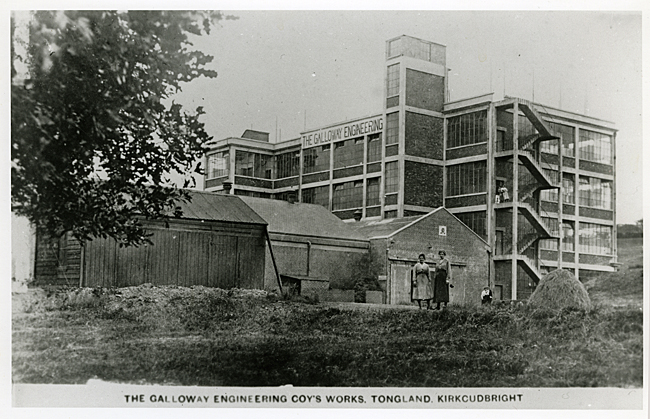 In 1917, with Britain still at war, Arrol-Johnston built a second aircraft factory about 25 miles from Dumfries at Tongland, near Kirkcudbright.  Trading under the name of the Galloway Engineering Co., it focussed on the production of parts for aero engines, and employed a largely female workforce.

The factory was unusual in that it was developed as a specialist college for female engineers. (At the time, the only one of its kind in Britain.)  Advertisements for employment (at both Tongland and Dumfries) were directed towards ladies with a “higher grade education”.   Its modern and spacious design was also praised, along with the working and recreational facilities available to both male and female employees.  About 150 women worked at Tongland as fitters and finishers. 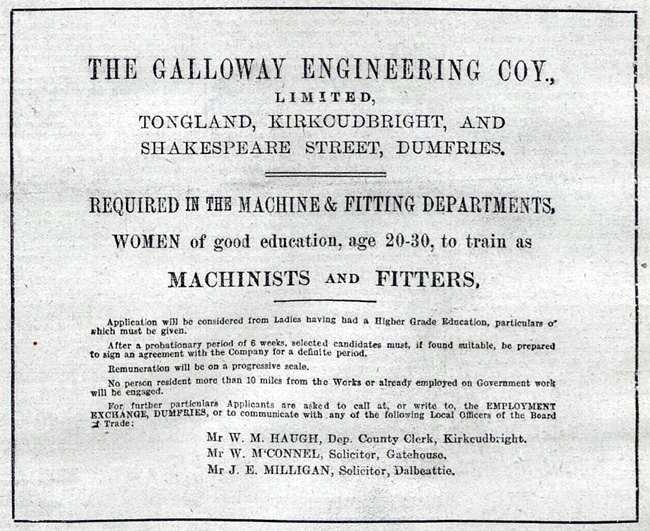 At the end of the War, Dorothée left Cumbria and moved back to Scotland to complete her apprenticeship with Arrol-Johnston and, in 1919, became a founding member of the Women’s Engineering Society.  She was also finally accepted as the first female member of the Institution of Automobile Engineers.  (Her initial application in 1914 had been rejected on the basis that she was a woman.)  In 1920, at the age of 26, she was awarded an MBE for her wartime work.

Almost inevitably, the end of the War had meant a reduction in the demand for labour, with large numbers of men returning from military service.  It also brought into question the future of armaments factories, such as that in Tongland.  However, Dorothée, and her father, Thomas, were determined to uphold their promise to provide women with employment once the needs of the War had been met.

To this end, Dorothée proposed developing a car that was much more suitable for women to drive than many existing models, which tended to be heavy and cumbersome. With many women having learnt to drive during the First World War, Dorothée and Thomas believed that the time had come for a new car specifically designed for the female driver - one that would be made for women, by women. 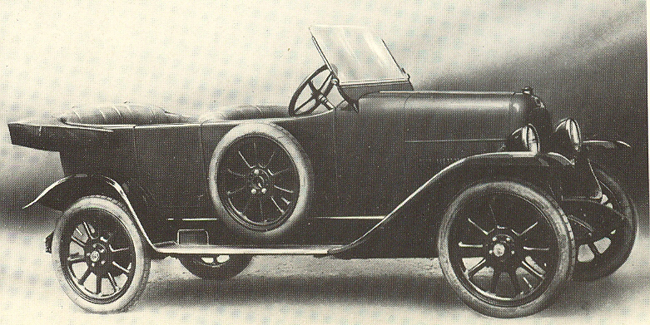 The Galloway 10/20, as it was known, was launched in October 1920.  It was based on a Fiat Tipo 501, Fiat’s first post-War car, an example of which the Pullingers had bought and then dismantled.

Amongst the changes that Dorothée made were moving the gear lever to between the driver and passenger, raising the driver’s seat, lowering the dashboard, reducing the size of the steering wheel, adding a rear view mirror (one of the first to do so), and improving the leg room and storage capacity. The Galloway came in various body styles, but mostly as 2- and 4-seater open tourers.

Initially the Company tried to recruit middle class women, who would live in a nearby hostel, to serve a three-, rather than five-year apprenticeship.  (Dorothée believed, women were fast learners.)  However, the isolated location proved to be a barrier, and ultimately employees were drawn from the local area. 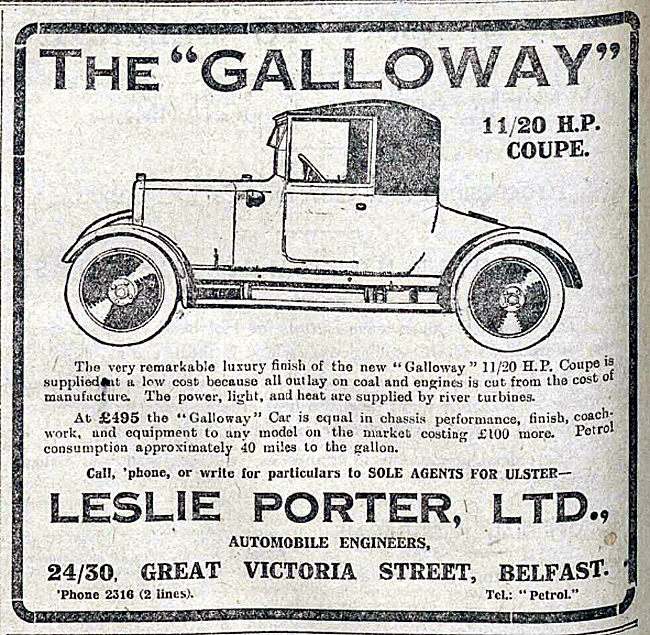 Whilst the educational aspect of Dorothée’s plans quietly waned, she continued to take the welfare of her workers very seriously, providing rooftop tennis courts, bathing and swimming facilities and a staff hockey team. Interestingly also, the Company’s colours were those of the suffragettes.

The design of the factory itself contributed to the car’s relatively low retail price.  The River Dee and springs on Culdoach Moor supplied a nearby hydro-electric power station with two turbines, eliminating the cost of steam, gas or coal engines normally required for car production.

Around 400 vehicles were made at the Tongland site before Arrol-Johnston moved production, in 1922, to its Heathhall factory. Galloway retained its separate identity until 1925, after which the cars were marketed as Arrol-Johnstons.  Production finally ceased in 1928, a year before Galloway’s parent company (now Arrol-Aster) went into liquidation. 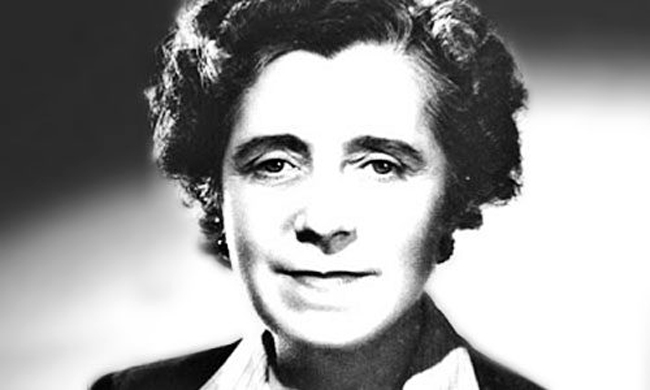 Dorothée Pullinger’s role as manager ended in 1922 when the Tongland factory was closed, but her interest in cars and engineering continued. In 1924 she won the Scottish Six Day Car Trial driving a Galloway and served her country again in World War II when she set up a women’s industrial war work programme and managed 13 factories. She was the only woman on a post-war government committee formed to recruit women into engineering, and the first woman to be inducted into the Scottish Engineering Hall of Fame.

The Tongland site was sold to the Scottish Artificial Silks Company in 1927 and then in 1935 to Galloway Eggs. The main building was used as a chicken and battery farm until late 1990s/early 2000s. Today part of the site is used by a company making reinforced plastic components, many of which are supplied to the transport industry. 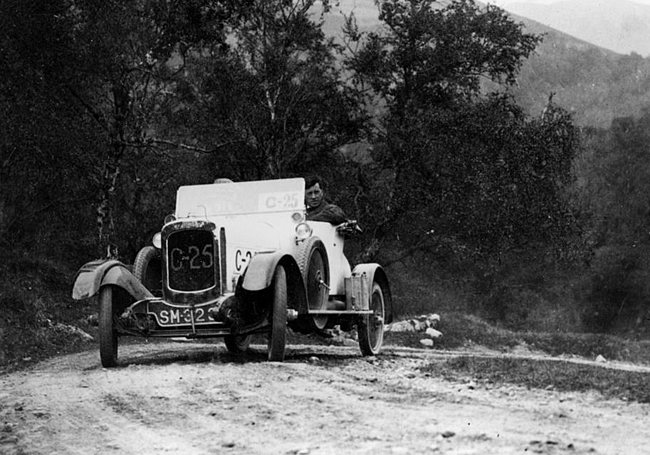 It is thought that there are only about 15 Galloways remaining today; most of these are in Australia, but three are in Scotland, and one at the Glasgow’s Riverside Museum.

An early motor manufacturer that produced one of the first cars designed specifically with women in mind.