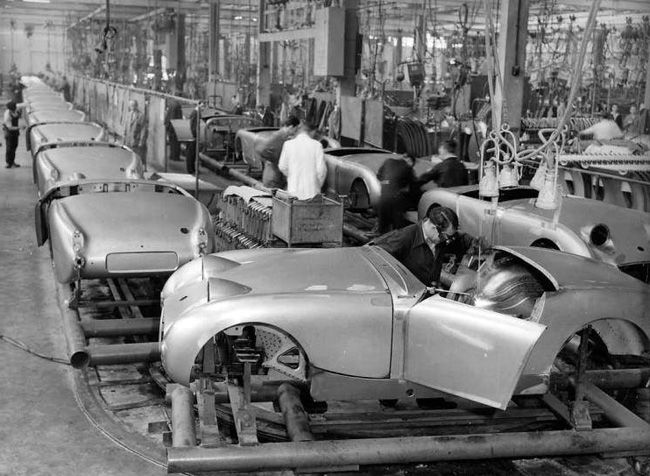 A metal car body and pressings plant where, particularly during the 1950s, ‘60s and ‘70s, body panels for many British car companies were manufactured.

Commentary
The Pressed Steel Company was originally established at Cowley in Oxfordshire in 1926 as a joint venture between William Morris and Edward Budd, for the manufacture of car bodies for the Morris Motor Company.

In 1930, Pressed Steel became an independent company and, by the 1950s, was making body panels for most major UK car companies, including Rolls-Royce, Rootes and Standard.

In order to meet and maintain these increased production levels, Pressed Steel sought permission to expand its plant in Cowley.  However, government policy at the time aimed to reduce population growth in London and major cities, and to support the development of other areas that might benefit from regeneration.  One such area was Swindon which, in 1952, was designated a London overspill town.

Although Pressed Steel’s preference was to expand its Cowley centre, it agreed to build its new factory in Swindon, largely because of its location within easy reach of the motor manufacturing plants of Oxford, Coventry and Birmingham.

In 1954, Pressed Steel bought Parsonage Farm in Stratton St Margaret on the north eastern edge of the town.  By the end of 1955, the first two presses were in operation.

Work on a second press shop began in 1957, and by 1965, with more than 6,000 people working on the site, Pressed Steel had become Swindon’s largest employer.

After buying the Rover Group in 1994, BMW divested itself of many of the company’s assets, but retained ownership of the former Pressed Steel plants in both Swindon and Cowley.

Today the Swindon plant produces most of the body pressings and sub-assemblies for the BMW MINI.

A metal car body and pressings plant where body panels for many British car companies were manufactured.