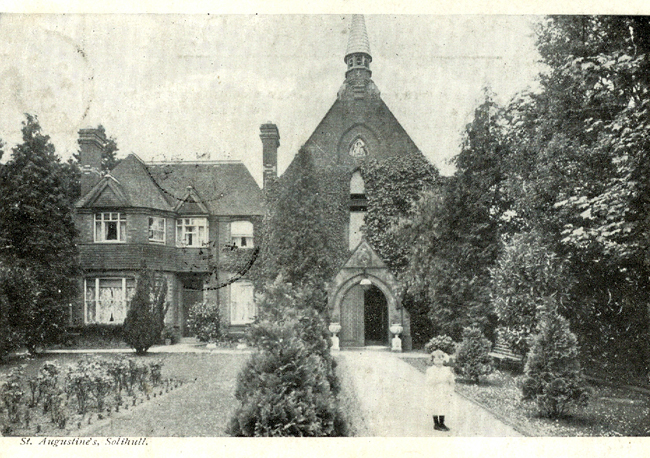 The setting of the first wedding in Britain for which the bride travelled to the church by car.

Commentary
In April 1897, Irma L’Hollier married Albert Day at St Augustine’s Roman Catholic Church in Solihull.  It was almost certainly the first time in Britain that a bride had arrived at her wedding in a motor car.

The groom was employed by Irma’s father, Leon, managing director of the Anglo-French Motor Carriage Co., based in Birmingham.  The company had been formed the previous year to make automobiles for the British market, using a design closely based on the Roger-Benz.  Reportedly three of these cars were used at the ceremony.

In 1895, Mr L’Hollier, previously a very successful manufacturer of perambulators and bassinettes, had imported the third automobile into Britain – a 4 h.p Roger-Benz.  However, the following year, he appeared before magistrates charged with contravening the provisions of the Locomotive Act 1878 by “working a locomotive on the highway without having a person preceding it by at least 20 yards”.

The police constable who witnessed and reported the incident said that he saw “the defendant driving a motor or horseless car along the Stratford Road at Shirley, travelling between five and six miles per hour”.

The case for the defence was that the car that Mr L’Hollier was driving did not come under the terms of the Act.  It neither worked nor sounded like a steam engine, and could not in any way be described as a locomotive.  In addition, the motor car was not in existence when the Act was passed; therefore, it was argued, how could prohibition extend to something that had not been invented? 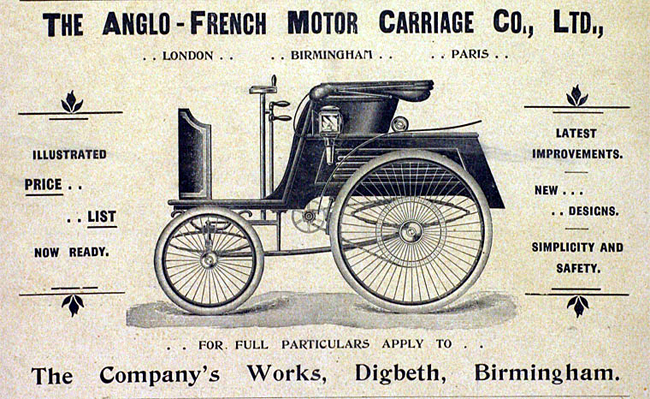 It appears that there was some sympathy on the bench for this argument, with one of the magistrates agreeing that “it would be a very good thing if the law was altered”.  However, they could not set the law aside, and so decided to fine Mr L’Hollier the sum of one shilling, with costs.

Mr L’Hollier’s defence counsel then said that his client had come to court in his automobile, and explained that all would be welcome to inspect and ride in the car if they chose, adding that he hoped that Mr L’Hollier would not have any difficulty in returning home in the car.  The chairman’s reply is simply recorded as “I think not.”

Later in the year, the so-called ‘Red Flag Act’ was repealed, raising the speed limit to up to 14 mph and dispensing with the requirement for anyone to walk in front of the car.

The setting of the first wedding in Britain for which the bride travelled to the church by car.