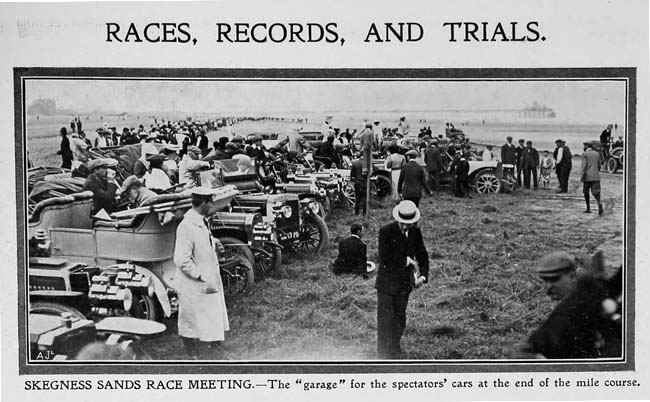 Commentary
In October 1904, reports appeared in the paper of plans by the Lincolnshire Automobile Club to hold a series of speed trials on the sands at Skegness the following summer.

The first meeting took place on Skegness beach on Saturday 2nd September 1905, with the course running over a mile from the Vine Hotel, on southern edge of the town, southwards towards Gibraltar Point.

Although the event was originally proposed by the Lincolnshire AC, it appears that the Club chose instead to focus their efforts on organising an earlier meeting further up the coast in Mablethorpe.  As a result, the Skegness trials, were run instead by the Nottingham AC, with an “appearance competition”, seven separate events for cars, and a “speed exhibition”. 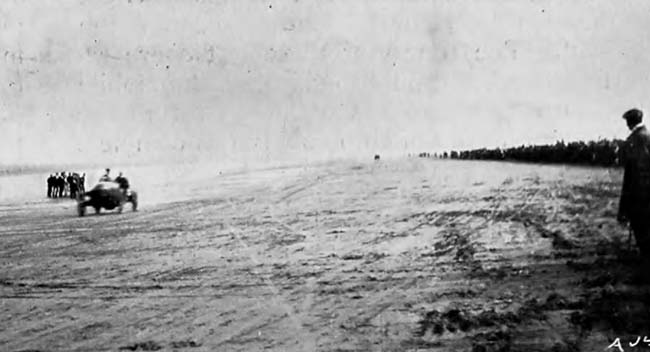 Cars were divided into classes on the basis of their price, and the racing organised through a series of elimination heats, with winners competing for the prize in each class.

The “appearance competition”, held on the town’s North Parade, was won by a Mr Winter in his 20-30 h.p Renault, with Dr Thompson taking second place in his 18 h.p Dennis.

After the racing had been completed, a speed demonstration was given by Cecil Edge in his record-breaking 90 h.p Napier against two lesser-powered cars, each of which was given a 20-25 second start. 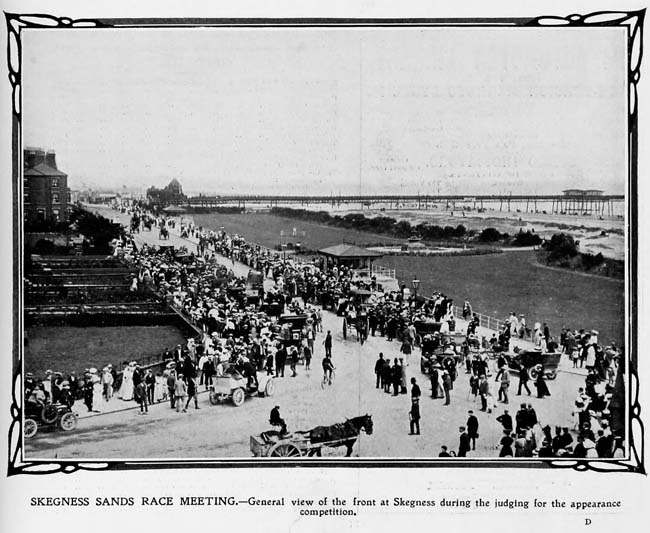 The 1906 Skegness meeting was held on the 8th September, and again organised by the Nottingham AC.  It was a larger gathering, with a good crowd of spectators; however, the unusually low tide left meant that much of the course was rather soft, and not conducive to good racing.

The racing on this occasion does not appear to have been particularly close, although an exciting battle was recorded in the race between Cecil Edge’s 50 h.p Napier and Ernest Instone’s 35 h.p Daimler, which Mr Instone narrowly won.

It was not until 1923 that racing returned to Skegness, with a two-day meeting on 31st May and 1st June.  Organised by the Skegness Advancement Association, it coincided with the beginning of Skegness Carnival Week. For this event, the course, marked out by a local builder, ran from the Seacroft Hotel (now known as the Royal) south, towards Gibraltar Point.

Although the organising committee had no doubt done their best to ensure that the meeting went smoothly, it turned out to be less than ideal.  A planned race between an aeroplane and a car had to be cancelled, officials were unable to accurately time the events because of to a problem with the telephone system and, on the second day, perhaps due to the unseasonably cold weather, the crowds were smaller, and the sea encroached on part of the course.

The list of entries, however, read like the great and the good; including Humphrey Cook (TT Vauxhall), Lionel Martin (Aston Martin) and Raymond Mays (Bugatti).

Undeterred, the local council decided to repeat the event the following year on June 18th-19th.  With kinder weather, the meeting was a great success.  Most of the well-known drivers from the previous year returned, but the headline event was probably the race between Sir Malcolm Campbell, driving his 350 h.p V12 Sunbeam and J G Parry Thomas in the 7.2-litre Leyland Thomas, who achieved the fastest time of the day (FTD) of 133.33 mph. 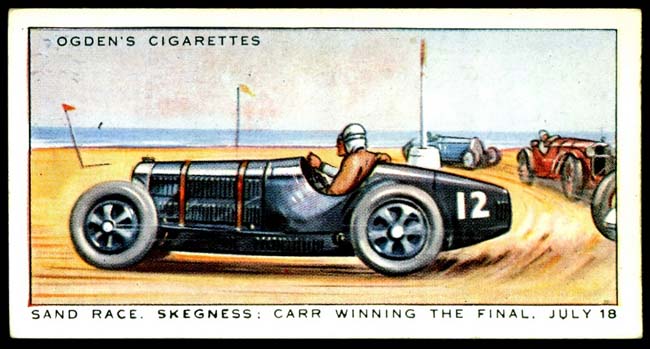 Race meetings continued to be held at Skegness until 1931.  Highlights of the 1925 meeting were the supercharged AC, driven by Raymond Mays, Ivy Cummings winning in a Bugatti, and Sir Malcolm Campbell, driving a Sunbeam, beaten to the FTD by a smaller 12-40 Mercedes driven by E A Mayner.

Reports of the 1930 event suggest that the racing took place on a circuit marked out on the beach, rather than a single strip of land.  The races appear to have been run over one, four or five laps, with reports making reference to a Bugatti’s “nippiness on the corners” and “several cars reaching the corner four or five abreast”. Much more exciting. 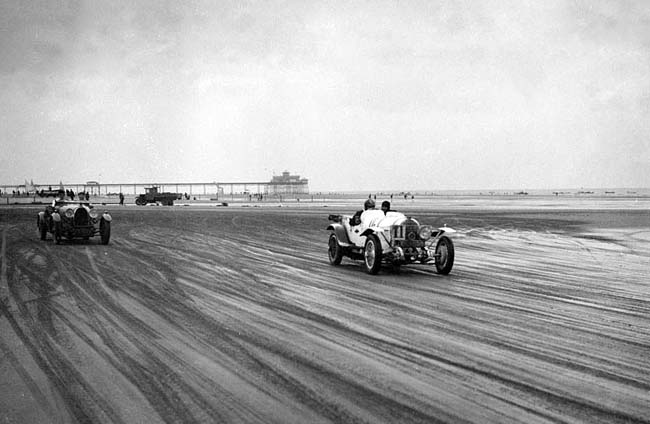 The final sand race meeting at Skegness took place over the weekend of the July 17th-18th 1931.  Again, the weather was not good, but this did not dampen the enthusiasm with which the event was reported.  The racing line-up included Bugattis, Vauxhalls, Mercedes and a Frazer-Nash, the latter driven by Adrian Conan-Doyle, the second son of Sir Arthur Conan-Doyle, author and creator of Sherlock Holmes.

Although motor racing at Skegness is now a thing of the past, there is today a well-established annual motocross event for solo bikes, sidecars and quads.

With thanks to Gordon Brooks for his help in the research of both these articles on Skegness.

From Skegness, southwards, towards Gibraltar Point.