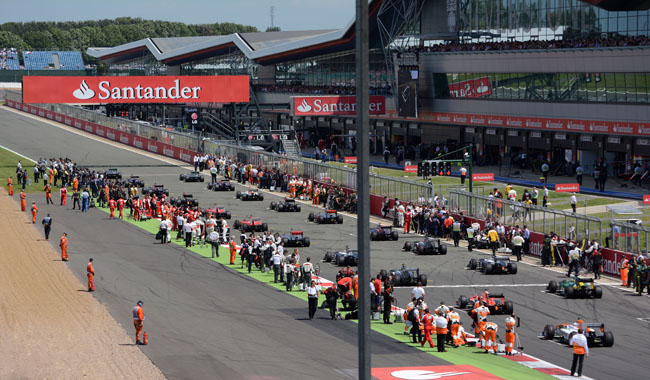 Commentary
Motor racing was slow to return to Britain at the end of the Second World War. Petrol rationing and shortages of other materials posed obvious problems, but there were further limitations due to the unavailability of any kind of national racing circuit.  The track at Brooklands was derelict, Crystal Palace had been left in a very poor condition by the War Department, and Donington Park was still in use as military depot.

In 1948, the Royal Automobile Club, the then governing body for motor sport in Britain, began to make a determined effort to address this problem and looked at a number of former airfields as potential sites.

One of these was RAF Silverstone, a World War Two bomber base, which became operational in 1943.  After its closure in 1946, much of the land was returned to farming, although the former airfield was used unofficially by local racers in the period immediately after the War.

It was the former racing driver Francis Curzon, the fifth Earl Howe,  and Chairman of the RAC’s Competitions Committee, who persuaded the RAC to apply to the Air Ministry for a short lease of the airfield in order to stage what would be Britain’s first post-War grand prix. 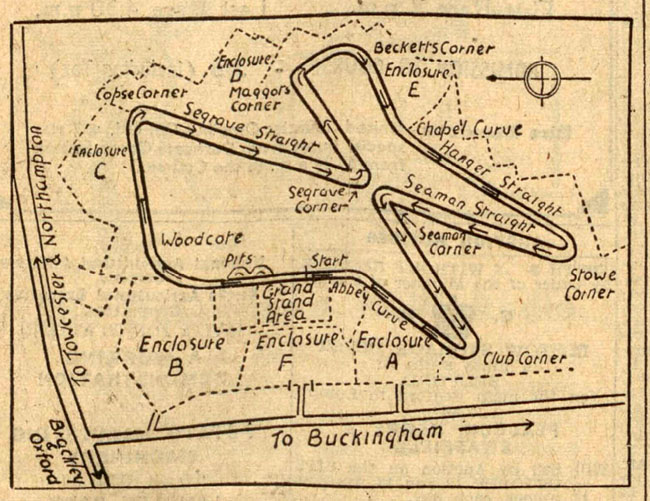 Although it was, and still is, quite a bleak and windy location, the layout of the former bomber base, and in particular its perimeter road, gave the organisers a head start in developing the site as a race track.  However, what is probably most remarkable is the speed with which preparations for the event were undertaken.

The first announcement of the new track appeared in the Times on July 3rd 1948 stating that the RAC had announced that negotiations were almost complete between the RAC and Ministry of Defence “for the release of Silverstone Airfield as a motor racing circuit”; adding that the RAC had agreed to assume financial responsibility for the project for a trial period.

On August 13th, the paper reported that the Royal Automobile Club had received official confirmation from the Air Ministry that the airfield would be available for motor racing, and that “arrangements were in hand to hold the first meeting on Saturday October 2nd”.

Details of the planned race were also given in the August and September editions of Motor Sport.  The race for Formula One cars would be over 250 laps of the 3.67 mile course.  Entries would be limited to 25, with an entry fee payable of £15 per car.  On the 21st September, the Times announced that so many entries had been received, that many had to be held in reserve. 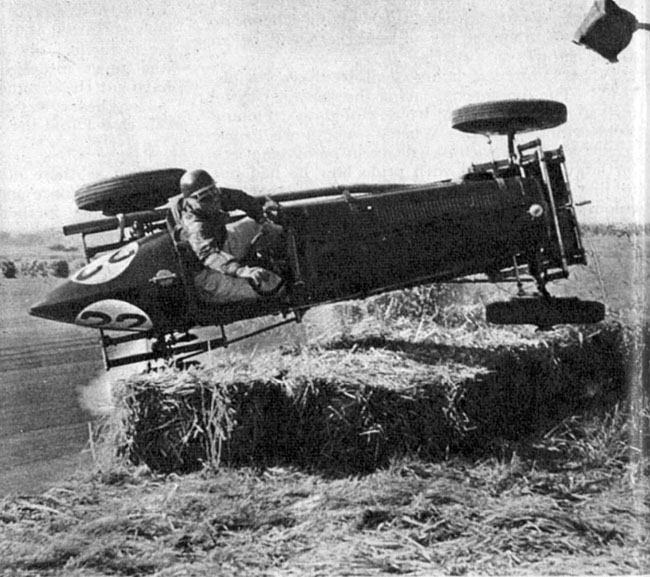 The track configuration chosen for the first Silverstone races used the perimeter road and both the old main runways.   The course was marked out with oil drums and bales of hay and took the form of an irregular figure-of-eight.  The organisers erected canvas screens at the central point where the two sections of the track came close together as an aid to drivers approaching one another at very high speeds from different parts of the circuit!

From the outset, names were given to various sections of the track, each derived from landmarks closed to the airfield.  Many of these, including Abbey, Beckets, Chapel and Stowe, are still in use today.

The level of preparation required for the event, particularly in such a short space of time, was prodigious.   Motor Sport reported that “170 tons of straw bales had to be correctly positioned, 250 marker tubs put out, ten miles of signal wiring laid, and 620 marshals briefed for duty.”  A huge amount of administration was required to bring the teams to Silverstone, including arrangements for RAC patrols to escort the Italian Maserati team from the docks to the circuit.

On Saturday October 2nd, the sun shone, and an estimated 100,000 people made their way to the circuit.  Gettting in to the event, it appears, was not a problem for race goers, although severe bottlenecks were reported when people left! 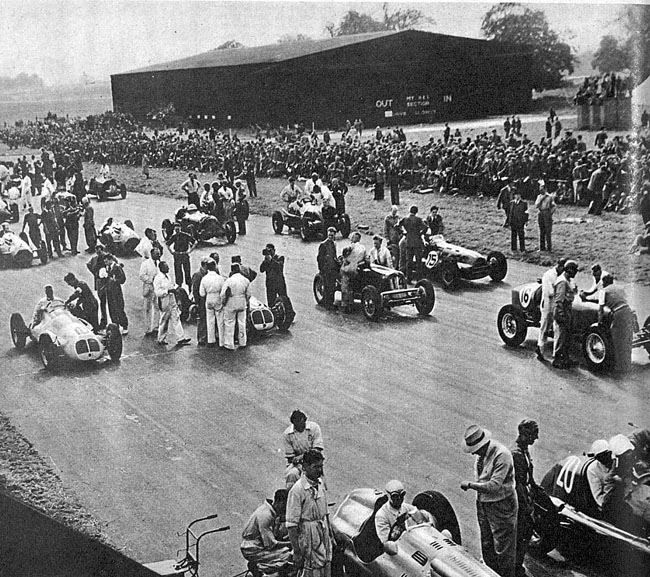 The main race of the day, the RAC International Grand Prix, was won by Luigi Villoresi, with Alberto Ascari in second place, both driving Maseratis.  In the run-up to the race, the Times had noted that there was little chance of a home win as the British cars were predominantly of a pre-War design.  Later, the paper commented that the final result was a salutary reminder of the inadequate British representation, but particularly praised Bob Gerard for bringing his ERA home in third place.

Seven months later, Silverstone staged its second Grand Prix, on a re-designed course, making greater use of the perimeter road, and bearing a much closer relationship to the current layout.

The lease of the circuit was transferred from the RAC to the British Racing Drivers’ Club in 1952, who went on to purchase the site from the Ministry of Defence in 1971.

In the following years, the track and facilities have continued to evolve in order to meet the increasingly stringent safety and commercial requirements of modern motorsport.  Silverstone, however, still hosts a wide variety of racing from historic, club and go-karting events, to the Formula One British Grand Prix.