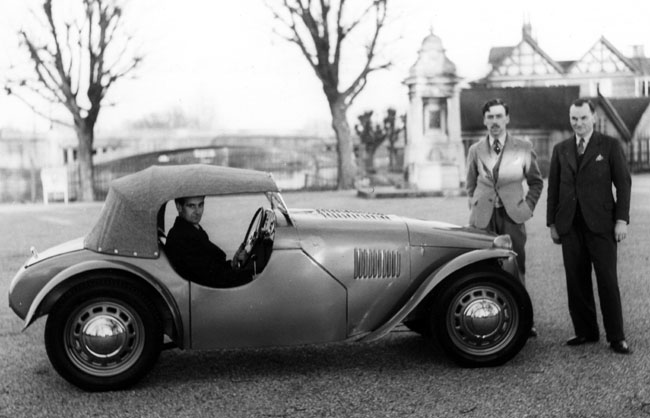 The company that began the modern British special and kit car movement.

Commentary
Today (2020), 67 Caversham Road is part of a relatively new building occupied by a music shop and gymnasium.  Until the late 1980s, it was one of two semi-detached properties, with an access road opening into a large yard surrounded by warehousing and small buildings.

Records show that a number of different businesses have occupied these premises; the most long-standing of which was probably William J Barkus - for many years an agricultural cart dealer, later selling motoring accessories, electrical switchgear, and second-hand and remould tyres. 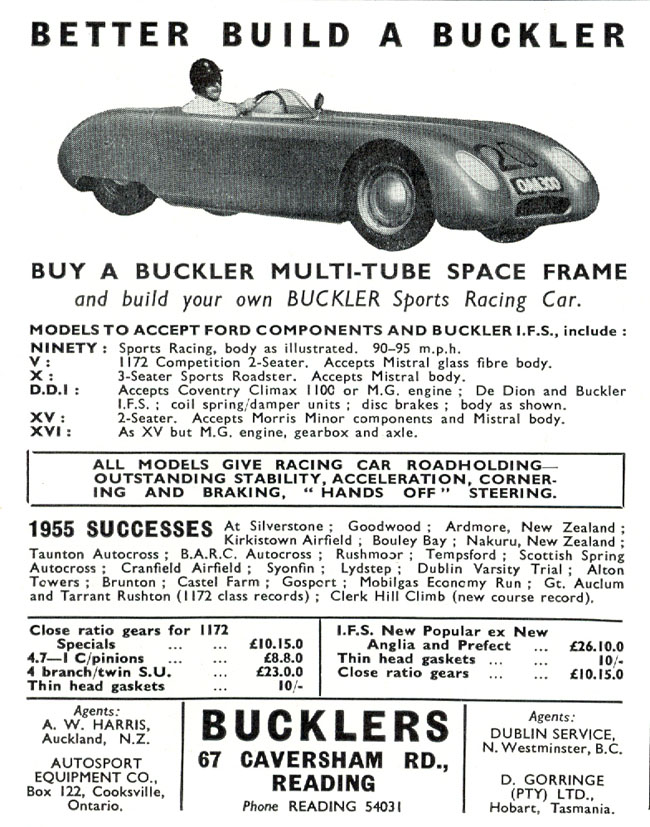 However, the address is best known as one of two locations where Buckler cars were manufactured; although “manufacture” is probably not quite the right word, as Buckler, more accurately, made or supplied virtually all the components (except the bodywork) for individuals to build their own car – at a greatly reduced price.

Buckler Cars was the brainchild of Derek Buckler, born in London in 1910.  On leaving school he worked in his father’s engineering business, Frank Buckler Ltd, but then moved to take up articles at a firm of solicitors in north London.  In 1932, he joined Watford Dairies as transport and sales director, and by the end of the decade (possibly after his father’s death in 1938) was working as a motor engineer, having bought into W J Barkus, together with Welco Farm Implements Ltd, based about 13 miles away in Crowthorne.

For the next six or seven years, his work was primarily geared towards the war effort; but in 1946 Derek Buckler’s interest in chassis design began to develop after seeing an unfinished racing car that a friend had recently bought.  Les Brown, in his book “Special Obsessions” explains that, unable to persuade his friend to sell the car, Derek immediately began to design his own.  The result was something that, for a while, placed Frank Buckler at the forefront of motoring’s technical and social development. 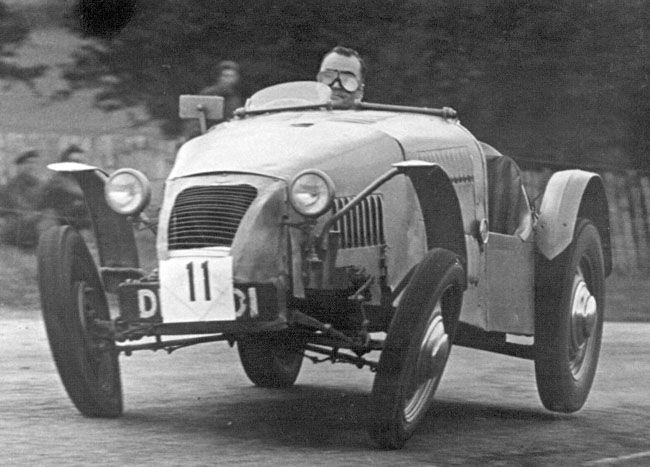 Derek Buckler’s great technical achievement was the spaceframe chassis that he devised for his first car, in 1947 - a time when Grand Prix racers were still using a twin-rail construction.  His designs used light narrow-gauge tubing to form a three-dimensional skeletal frame to which the engine, suspension and bodywork were attached.   Although this idea had already been used in aircraft construction and architecture, Derek Buckler was almost certainly the first person to create a spaceframe design for motor car production.

The engine of his car, registered DDP 201, was from a 1939 side-valve Ford Ten, reflecting Derek Buckler’s other great motoring contribution – accessibility.  Such was the state of the British economy at the end of the Second World War, that the supply of steel for car production was conditional on manufacturers selling most of their output overseas in order to obtain much-needed foreign currency.  Those lucky enough to buy a new car in Britain during the immediate post-War years tended to be very rich, very influential, or members of ‘essential’ professions, such as doctors.

There was of course a huge pent-up demand for motoring after the privations and restrictions of war, but continued rationing and high taxation placed private motoring well beyond the means of most people.  One obvious way to deal with this was through the purchase of a pre-War car.  Although perfectly satisfactory in some ways, the older design failed to meet the expectations of those who were hoping for something better after all the years of conflict – something that was more exciting and modern. 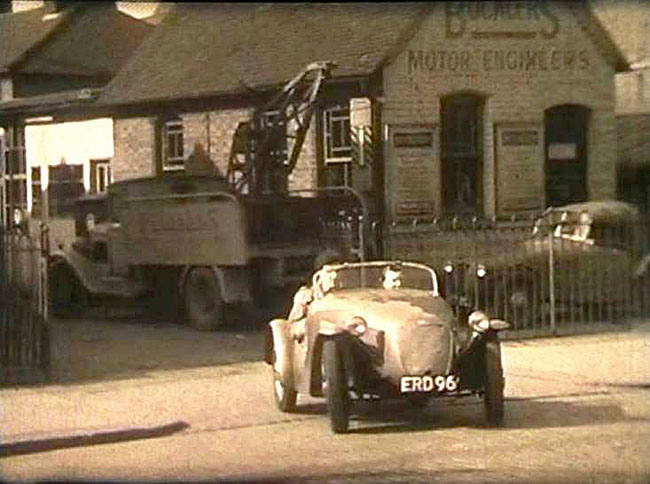 Derek Buckler’s solution to this was to use pre-existing engines and parts (often initially from a Ford Eight or Ten), attached to a lightweight frame, clad in a simple aluminium (or, later, fibreglass body), to develop a car that could be used for both leisure and sport.   The benefits of this approach included better roadholding, lower fuel consumption, thanks to the lighter stripped down body, and access to competitive motoring at a greatly reduced cost.

It was not until 1949 that Derek Buckler’s first car, confusingly known as the Mk V although original for some reason called the Colonial, was put into production at Caversham Road.

All the components of the car, except the body, were supplied by Buckler’s.  This was because home-built cars (or ‘specials’ as they became known) were at the time exempt from purchase tax, and Derek Buckler believed that providing components for a complete car ran the risk of buyers losing this benefit.  Customers were therefore required to make their own arrangements to obtain body panels from a separate supplier – often C F Taylor, conveniently located at the rear of Buckler’s Crowthorne factory. 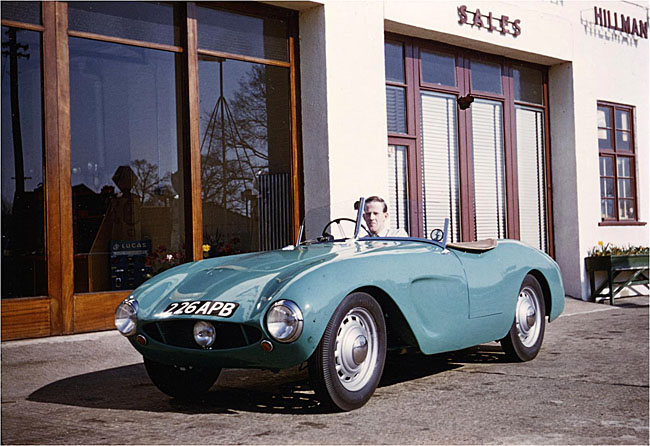 One consequence of this decision was that Buckler cars came in a number of different guises, depending on the company from which the bodywork was obtained.  Bucklers are therefore not always immediately identifiable, particularly as owners sometimes did not receive a Buckler badge until they had sent a photograph of their finished car to Caversham Road.

Sporting success came to Buckler’s from the outset, for Derek wasted no time in competing in the original prototype.  Between 1947 and 1956, he won more than 200 awards in trials, hillclimbs, rallies and circuit races.  In the summer of 1953, he took the car to the Cheltenham Motor Car Club’s fuel economy rally, staged over a route of 578 miles. Averaging 30 mph, Derek Buckler won the ‘Specials’ section, with an overall fuel consumption figure of 91.023 mpg.

Car production began in 1949, and it seems that far from offering a standard package, Buckler's did their best to supply engines and components tailored to customers’ requests.  They also later acted as agents for fibreglass body suppliers, including Convair, Microplas and Rochdale.

In 1954, the company was split into Buckler Engineering, based in Reading, and Buckler Cars, in Crowthorne.  Buckler Engineering manufactured and supplied a wide range of products for both the specialist builder and other manufacturers.  They also undertook individual orders for engine, suspension, and gearbox modifications etc.   Buckler Cars at Crowthorne factory manufactured the spaceframes and built cars for customers. 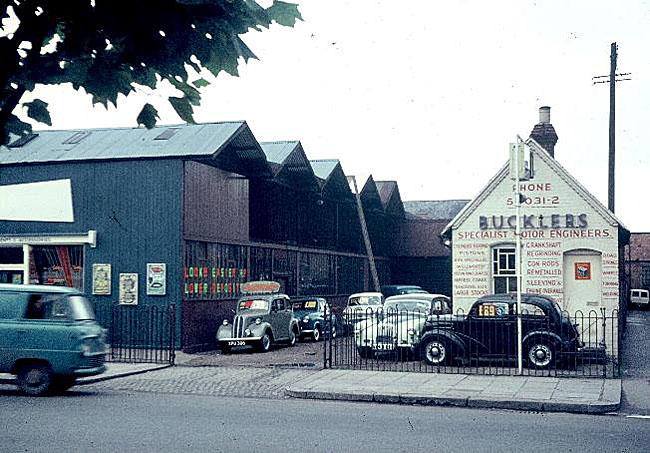 In 1956, Derek Buckler withdrew from motorsport after suffering a heart attack, and sadly ill-health dogged him for the rest of his life.  In 1958, Peter Hilton was appointed to run the Crowthorne factory, and the company was sold in 1961.

Derek Buckler died in 1964 at the age of 53.  The firm continued to operate for four more years, but the loss of its founder, and the decline of the ‘Specials’ market led to the company’s closure in 1964.

Bucklers (and later, Bucklers of Reading) continued to trade on the site, dealing mainly in car sales; but by 1964, it had become a Dennis Hands motor dealership.  In 1982, the site was occupied by the Berkshire Motor Co., then Lords of Reading, and finally Carvell Car Hire, in 1987.

With thanks to Simon Ambrose and David Montgomery for their help in the preparation of this article.

The company that began the modern British special and kit car movement.