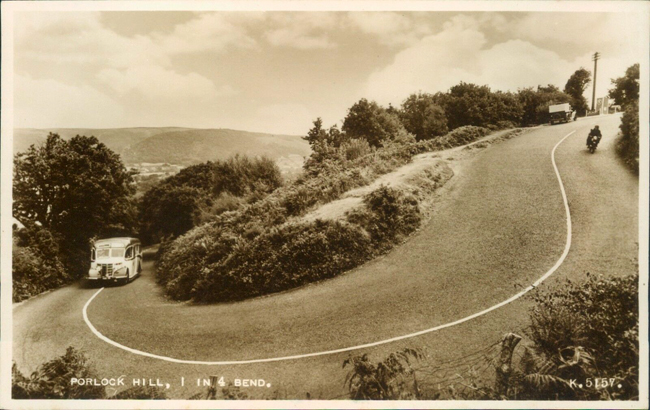 Reputedly the steepest main (A) road in England.

Location
The A39, west of Porlock village.

Commentary
With a gradient in places of 1 in 4, and climbing to over 1,400 feet, the A39 out of Porlock contains the steepest section of ‘A’ road in England.  Running all the way from Bath down to Falmouth, it offers a slower, but picturesque, route to the south-west.

Porlock Hill is also famous in motoring circles as the setting for an early attempt to promote the viability of the motor car – particularly in relation to the traditional horse and carriage.

The former racing cyclist, Selwyn (S.F) Edge was an early British motoring pioneer.  His first car was a Panhard-Levassor, bought from Harry Lawson in 1898 or 1899.  As far as Edge was concerned, the French car had many strong points, but was seriously let down by its tiller steering.  In view of this, he asked an old cycling acquaintance, Montague Napier, to design and build him a system of wheel steering.  Napier was an excellent engineer, but had virtually no experience of working with cars.  However, over the next few months, the two men successfully collaborated to improve the Panhard in a number of ways, leading them to a decision to build their own car – the first Napier, with an 8 h.p, two-cylinder engine. 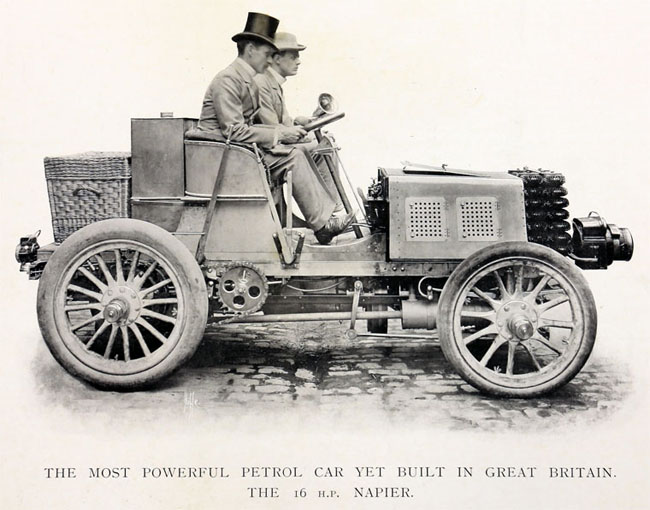 S.F Edge’s initial contract with Montagu Napier was for three two-cylinder 8 h.p cars, and three four-cylinder 16 h.p cars – the latter with a view to entering the forthcoming Gordon-Bennett Race – an international competition in which countries competed against one another, each with their own team of home-produced cars.

A prospective buyer of one of the 16 h.p cars told S.F Edge that a Mr Otter was prepared to offer a wager of £50 to anyone able climb a certain hill in north Somerset in a motor car that was currently being produced. The offer had been made some months before, after a gentleman visiting Porlock tried to climb the hill in his own car – but without success.

No doubt keen to benefit from any publicity that might this might generate, Mr Edge took Mr Otter at his word; and with a mechanic and his old cycling friend, Frederick Bidlake, drove the Napier down from London to Minehead on Saturday 25th August 1900, in the belief that “there was no incline in the world that could not be climbed, as long as the car was sufficiently low-geared and there was sufficient grip for the rear wheels”.

The following day, Mr Edge and his party drove the short distance to Porlock, meeting Mr Otter, who was on horseback, at the Ship Inn, where a large crowd had gathered. 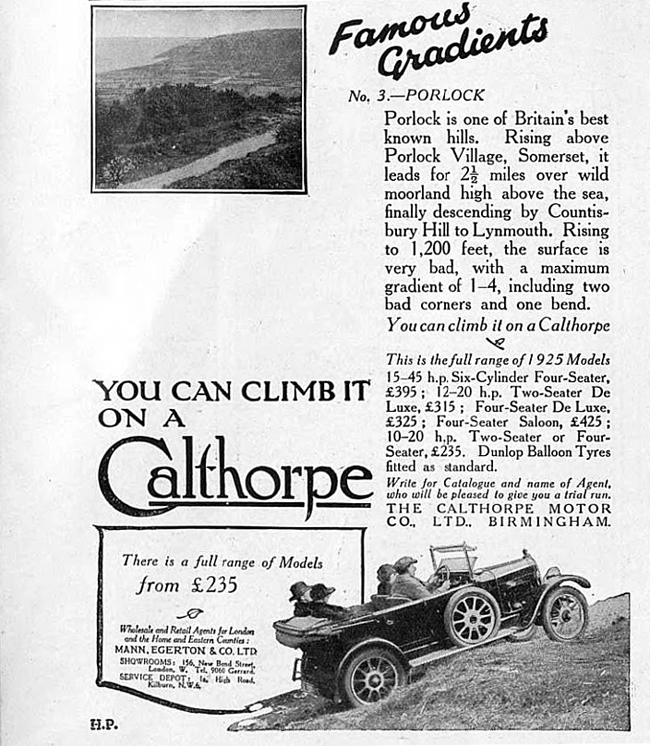 As Edge later explained, with three aboard, “before many yards had been covered we had left the horse far in the rear, and we never saw it again until we reached the top of the hill, where we had to wait some time for its arrival.  The car ascended even the steepest portions without the slightest difficulty, and the wager was duly won”.

This was the first time a motor car had been known to climb Porlock Hill.  It covered the three-and-a-half miles to Porlock Head in 17 minutes.

As a postscipt, an article in the Somerset County Herald, dated 10th September 1938, states that the owner of this car (and one of the passengers in the ascent) was Roger H Fuller, whose other claim to motoring fame is his journey from Land's End to John o'Groats with Jack Stocks in July 1902.

A39, west of Porlock village.
,
Reputedly the steepest main (A) road in England.