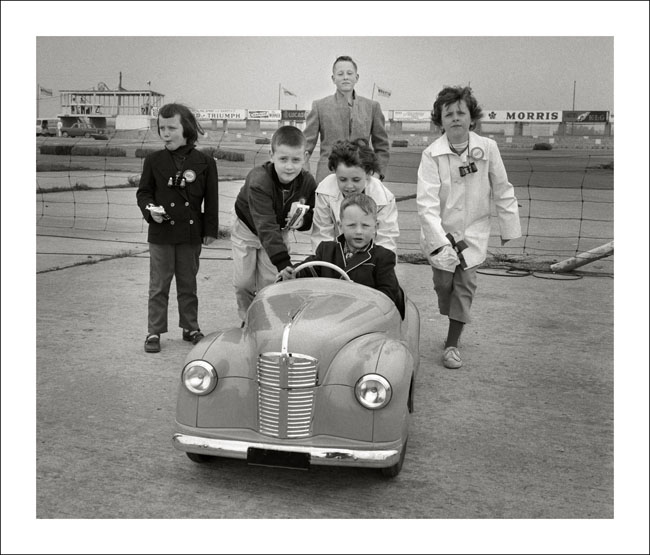 Commentary
When Leonard Lord became managing director of the Austin Motor Company in 1938, his main priority was to re-vitalise the existing model range; however, helping with the nation’s preparations for war soon took priority.  With the end of hostilities in 1945, Lord aimed to transform Austin into a world leading manufacturer.  This required, he believed, the establishment of a strong brand loyalty; and one way in which he thought this might be developed was through the production of an Austin pedal car for children.

The end of the War also saw widespread unemployment in parts of the country, as Britain returned to a peacetime economy.  Amongst those particularly affected were the people of South Wales, where 70,000 men and women were out of work; many having become redundant almost overnight. 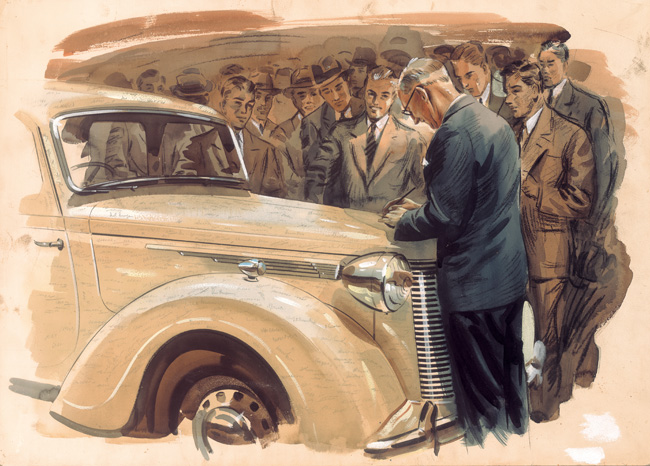 A further problem, particularly affecting Wales, was the number of miners suffering from pneumoconiosis - a lung disease caused by the inhalation of coal dust. A compensation scheme for disabled miners had been introduced during the War, and in 1946 further support became available with the development of a government-funded factory scheme, specifically designed to employ disabled people in South Wales.

This announcement chimed in perfectly with Leonard Lord’s idea for a children’s car, and it appears that he quickly decided that the pedal car, which had yet to be designed, should be built by disabled miners in one of the new factory units in Pengam.

The project initially consisted of a team of just three people: Ron Phillips, a commercial artist, Jim Blaikie, a draughtsman in the Austin Planning Department, and Alf Ash from the factory’s Sheet Metal Department.  Their brief was to design a child’s pedal car that looked (both inside and out) like a real Austin, and which could be built by disabled miners.  The team, based in a workshop in the East Works at Longbridge, was given just under four months to produce their first car, which was to be shown at the Austin Progress Convention in June 1946, celebrating the production of the millionth Austin car. 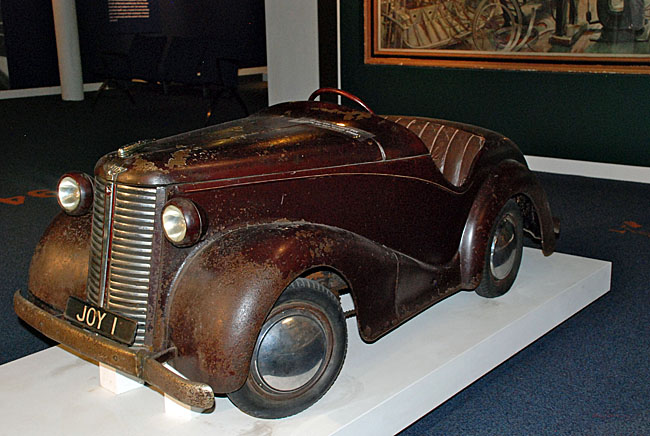 The first prototype, named Joy 1, resembled the then current Austin range; with an alligator bonnet, chrome grill and separate headlights.  Although the team had met their deadline, the car itself was too heavy and difficult to pedal, despite initially being fitted with a three-speed Sturmey-Archer gear.

In the revised Joy 2, the designers addressed these problems by reducing the weight of the car, and replacing the cycle pedal system with a treadle mechanism.  The car was then loaned to Austin management staff for appraisal by their children.

The third prototype, Joy 3, was a new design, modelled on the single-seater Austin 7, which had raced with great success during the 1930s.  Known as the Pathfinder Special, it was simpler to construct, with fewer sub-pressings, and went on sale at a price of £25.4s.0d.

The Pengam factory was officially opened on 5th July 1949, but it wasn’t long before a second model was being prepared, based on one of the new range of Austin cars, the A40 Devon.  By November 1950, Pathfinder production had ceased, and replaced by Joy 4, sold as the Austin J40.  It is this model that typifies the Austin Pedal Car. 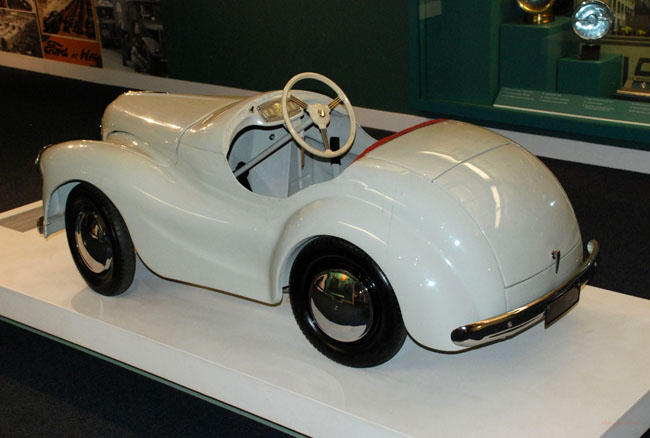 To the designers’ credit, the J40 incorporated almost all the requirements originally laid down by Leonard Lord.  It was capable of being made by disabled miners, who had been trained in welding, spraying etc, and it looked like the real thing.  It had a dummy engine, with four ‘real’ plugs (in fact rejects donated by Champion Plugs), working headlights, a horn, handbrake, and an opening boot,  The one area in which it fell short was that it was not made from off-cuts from full-size cars, as originally planned.  In fact J40 body sides were pressed in Longbridge and transported to Pengam for assembly.

The Pengam factory did not only produce pedal cars; it also manufactured other vehicle components, including rocker covers and lorry seats.  J40 production ended at Pengam in September 1971, after 32,098 pedal cars had been made.  However the factory continued to make pressings for Longbridge until 1999.  Today a small housing estate covers the land on which the factory stood.  Known as Pwll Yr Allt, postcode CF82 8FR.

With thanks to Damon Christopher from Bargoed Library, Llyfrgell Bargod, for his help with research.