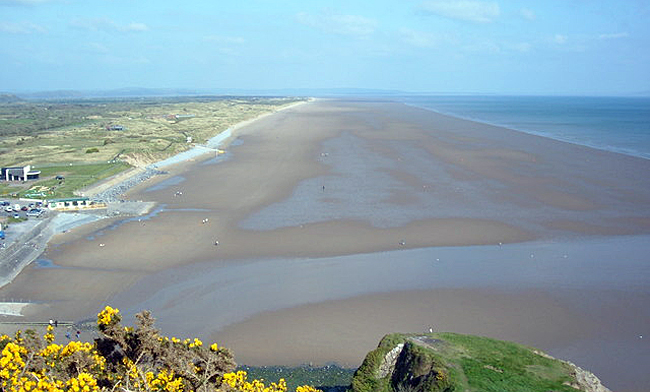 Originally established as a location for motor-cycle racing and speed trials, Pendine Sands are probably best known as the setting for a series world land speed records, particularly during the 1920s.

Commentary
The seven mile stretch of firm sand, forming the north coast of Carmarthen Bay, has been the location for motor-cycle and car racing for more than a hundred years. 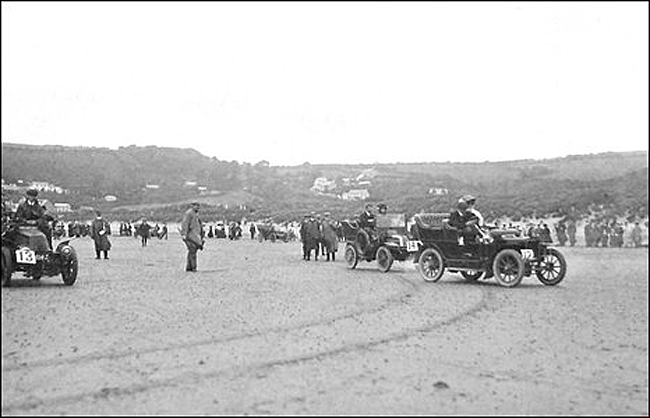 According to Julian Hunt, the first motor-cycle races took place on the Sands on the 18th August 1905, and the first motor races on the 16th July 1909; an event involving about 40 cars and motor-cycles, and thousands of people who came along to watch.

However, Pendine is probably best remembered for its association with world land speed record bids between 1924 and 1927.

On 25th September 1924, Malcolm Campbell, already a successful racing driver, established a new world land speed record of 146.16 mph over a measured mile at Pendine Sands.  His car was Kenelm Lee Guinness’s 18.3-litre V12 Sunbeam, the same car that Lee Guinness had himself used in 1922 to establish a land speed record at Brooklands (the last time that such a feat was achieved on a race track).

On 19th October 1924, the death was announced of Count Louis Zborowski, after crashing into a tree at the wheel of his Mercedes in the Italian Grand Prix at Monza.  Born in England in 1895, of a Polish father and American mother, Count Zborowski lived at Higham in Kent, and became best known for his success at Brooklands driving giant racing cars such as the Chitty-Chitty-Bang-Bangs.

Amongst the items to go on sale as part of Count Zborowski’s estate was his 27-litre, Liberty-engined Higham Special.  The car was bought by his good friend and rival, John Godfrey Parry Thomas.  Originally from Wrexham in North Wales, Parry Thomas, as he was known, was a highly skilled engineer and a successful racing driver’.

Unlike Malcolm Campbell, Parry Thomas was not a particularly wealthy man, and did not have the means to buy or build a car capable of taking or even challenging the world land speed record.  However, the purchase of the Higham Special – reputedly for £125 – brought the target a little closer.

Over the following months, Parry Thomas undertook a considerable amount of work on the Special, which he re-named ‘Babs’.  Modifications included a new sloping radiator, axle and steering column; new engine pistons and carburettors, and a clutch of his own design.  He also removed the second seat and re-shaped the front and rear of the car, giving rise to a car not dissimilar in appearance to the Leyland-Thomas, which he himself had designed, and with which he had achieved considerable sporting success.

On 19th October 1924, Parry Thomas arrived at Pendine with ‘Babs’ and his team of mechanics.  A course was marked out by timing officials from the Royal Automobile Club, and the car underwent final preparation.  However, after three days the record attempt was abandoned, hampered by poor weather and a waterlogged beach.

But there was better luck for Malcolm Campbell who travelled to Pendine in July 1925, with his same V12 Sunbeam that he had used a year earlier, raised his record to 150.77 mph.

In March 1926, another Brooklands’ star, Henry Segrave became the latest record-holder, nudging the land speed record up to 152 mph on the sands at Southport in Lancashire.  But this particular record turned out to be short-lived, for just a month later Parry Thomas returned to Pendine – and this time, his luck was in. 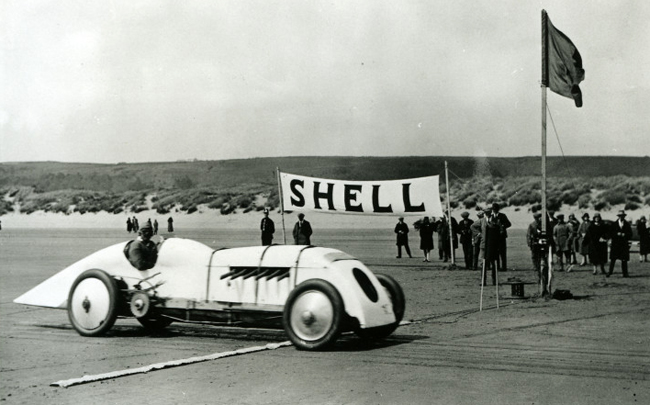 On 27th April 1926, as Mark Berresford explains, “after a couple of warm-up runs, Thomas took the flying mile record at 168.074 mph, and the kilometre record at 169.238 mph…Thomas knew that ‘Babs’ could be tuned further, for the car had been misfiring and making black smoke all day.  Therefore, after spending some hours adjusting the carburettors, he was out the following day, and managed to push the records even higher.  On this occasion, the mean speeds were 170.624 mph for the mile and 171.09 mph for the kilometre.”

Parry Thomas continued to race for the remainder of the 1926 season, and even managed to secure further endurance records.  Meanwhile, new cars were being prepared for record attempts by both Henry Segrave and Malcolm Campbell, with Malcolm Campbell spending Christmas at Pendine in preparation for the first test of the new ‘Bluebird’.

Although Campbell’s early runs were far from successful, hampered by poor weather conditions and problems with ‘Bluebird’s’ gearbox, he was eventually – on Friday 4th February 1927 – able to record a successful run, raising the land speed record a little further to 174.223 mph on a two-way run over the measured mile.

With Henry Segrave about to set sail for Daytona in Florida for another record attempt, and Malcolm Campbell anxious to beat his own record before Segrave’s run, Parry Thomas travelled down to Pendine from Brooklands on Monday 28th February 1927, perhaps hoping to be the first person to reach 180, or even 200 mph.  The weather, apparently, was not good, preventing any kind of run until Thursday 3rd March.

Newspaper reports indicate that Thomas did not look well.  Charles Jennings states that he was still suffering from ‘flu, having been confined to bed for the previous three days.  At 12.30pm, ‘Babs’ was taken out of the garage and pushed down onto the beach.  Parry Thomas did a couple of runs, which were fast, but not good enough to break the record.  He apparently then explained that he wanted to make some further adjustments and, 20 minutes later, set out again down the beach.

Reports indicate that about 100 yards from the end of the measured mile, travelling at great speed, the car was seen to skid, roll over, slide for some distance upside down, and then finally right itself on three wheels.

Those first to reach the scene found Parry Thomas’s body still in car.  He had suffered an appalling head injury, and had almost certainly died instantly when the car first turned over.

‘Babs’ was towed back to Pendine.  After the inquest, which took place the following day, the car was taken into the dunes, not far from the village, where it was interred along with Thomas’s coat and driving helmet.

Parry Thomas himself was buried at St Mary’s Church, Byfleet in Surrey, close to Brooklands where he lived. 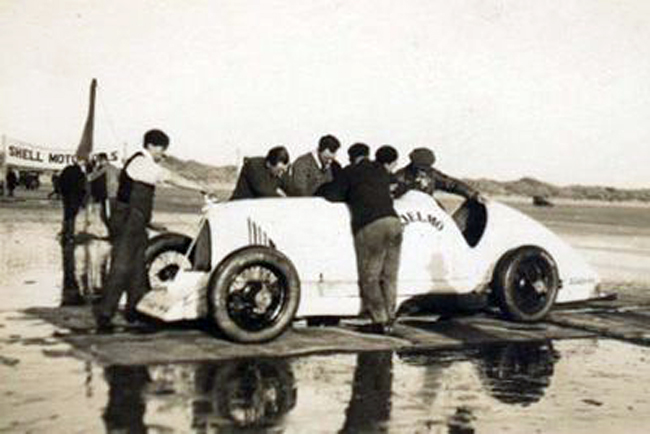 In the summer of 1927, Giulio Foresti, an Italian racing driver, arrived at Pendine in the hope of taking one of the lower level speed records in a low, narrow 8-cylinder, 10-litre car known as ‘Djelmo’. (Henry Segrave had by this stage taken the world land speed at Daytona to 203.79mph.)  However, Foresti’s attempt ended in failure in a way that bore an uncanny resemblance to Parry Thomas’s accident.  Reports indicate that at 150mph, ‘Djelmo’ slewed round in a wide circle, overturned, and then regained its wheels, with Foresti (who was not wearing a helmet) suffering only minor abrasions to his skull.

Pendine continued to be periodically used as venue for motorcycle racing until the early 1970s, but more recently appears to have undergone a revival with hot-rod racing and further record attempts. In June 2000 Don Wales, grandson of Malcolm Campbell and nephew of Donald Campbell, set the United Kingdom electric land speed record at Pendine in ‘Bluebird Electric 2’, achieving a speed of 137mph.

The Ministry of Defence acquired the Sands during the Second World War for use as a firing range.  The beach is still owned by the Ministry, and public access is restricted during the working week; opening times are published online via MOD Pendine Programme Information.

The northern edge of Carmarthen Bay.

The setting for a series of world land speed records during the 1920s.