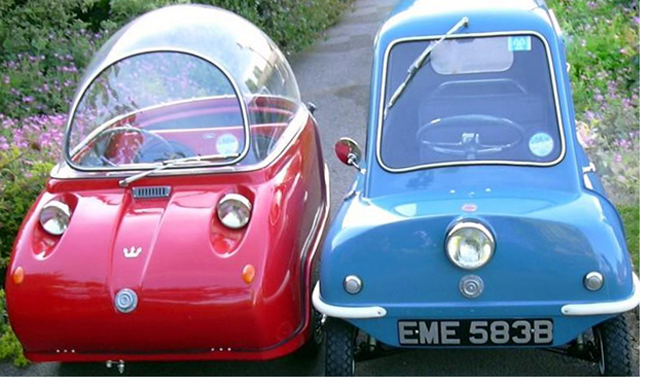 Manufacturer of the smallest production vehicle in the world.
Location

Peel Engineering Company, Viking Works, Mill Road, Peel, Isle of Man, IM5 1TB.
Date
Car production, 1953 - 1969.
Commentary
The Peel Engineering Company was founded in the late 1940s by Cyril Cannell.  He was born in Essex and grew up in London, but spent almost all his adult life on the Isle of Man.
Initially, the Company specialised in the manufacture of boats and marine equipment, but early experimentation with the use of fibreglass led to the production of motorcycle accessories – and cars. By 1953, Peel Engineering had developed a one-piece fibreglass bodyshell designed to fit a Ford Anglia chassis.  The body seems to have gone through a number of developments, with an initial very simple design taken up by the Canadian Campbell Sports Car Company in the production of their Buckler Special.
A later version of the car – now with a bonnet, boot lid, dashboard and double-skin doors - was known as the P.1000, and it appears that there were at one stage discussions with the UK division of the Ford Motor Company about producing the car in greater numbers.
In 1955, Cyril Cannell and Henry Kissack, a fellow director of Peel Engineering, designed and produced a second fibreglass-bodied car, known initially as the Manxman.  This was a tiny three-wheeler, powered by what appears to have a 250cc Anzani engine, and was planned to be available either in kit form or fully assembled. Although one car was produced, the model did not go into production.
The car for which Peel today is probably best known is the P50, first produced in 1962.  The three-wheeled, single-seater microcar is just 4’5” long, 3’3” wide and 3’10” high, capable of being squeezed into the tiniest parking space.  Weighing only 130lbs, it could also be manoeuvred by hand, simply by lifting the rear of the car.
Also designed by Cyril Cannell and Henry Kissak, the P50 used a 49cc DKW 4.2hp fan-cooled engine, giving it a top speed of 38 mph. The prototype, launched at the 1962 Earls Court Motor Cycle Show, had a single wheel at the front and two at the rear, although this arrangement was reversed on production cars in order to improve their stability.
In 1963 P50 sold for £199, a price that was actually cheaper than some motorbikes.  It is difficult to know exactly how many cars were sold; figures quoted vary between 55 and 100.  However about 28 P50s are believed to survive today.
In 1964, Peel added to the model range with the two-seater Trident. Using the same 49cc engine, the Trident comprised two fibreglass mouldings and a strong Perspex bubble canopy.  About 80 vehicles were sold until production ceased in 1966.  Grant Kearney, in his excellent site www.peelcars.com, estimates that about 30 Tridents still remain.
Peel followed the P50 and Trident with two further models.  The Viking Sport, was a two-door fibreglass coupe, designed to be built around BMC Mini components.  About 30 cars were produced, and a small number are thought to survive today.  Peel Engineering also received a request from BMC to develop the tooling for the production of a fibreglass body for the Mini, so that the car might be produced in certain overseas countries, under licence.  This project was cut short in 1966, following the re-organisation of BMC into British Motor Holdings.
Peel Engineering returned to the production of mouldings for the boat and motorcycle markets, until the company was sold during the 1970s.
In 2009/10, a number of replica P50 and Trident cars were offered for sale by a new company, also called Peel Engineering, based in London.
In 2014, a plaque (made of  fibreglass) was unveiled on the former site of Peel Engineering on Mill Road commemorating the P50 and the company's pioneering work in fibreglass technology.
Further details
• www.peelcars.com
• www.peelengineering.com

Manufacturer of the smallest production vehicle in the world.