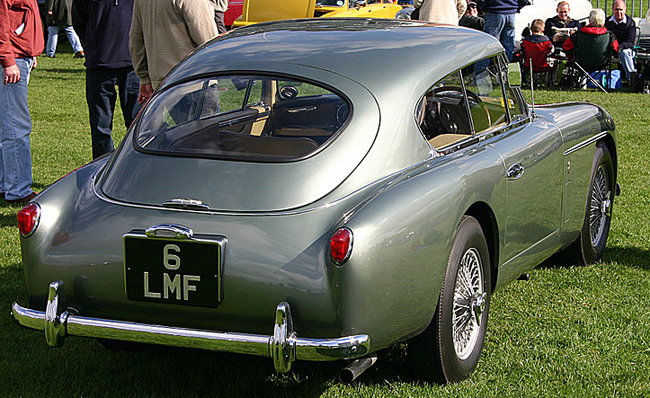 Commentary
In 1955, eight years after buying Aston Martin Motors Ltd, David Brown bought the coach-building firm of Tickford, based in Newport Pagnell.  It was to these premises that he eventually moved all Aston Martin and Lagonda production.

Tickford's origins went back to the coachbuilding firm of Salmons & Sons, founded in Newport Pagnell in 1820.  With the development of the motor car at the end of the nineteenth century, Salmons moved into the production of bespoke motor bodies, and by the outbreak of the First World War had become one of the country's largest firms of coachbuilders.  The company continued to prosper in the 1920s, and for a short while built its own car, known as the NP.  Although this did not prove viable, Salmons & Sons did succeed in the production of bodies with "Sunshine" and "All weather" coachwork, in which the whole of the roof assembly could be wound up or down from a handle towards the back of the car.

In 1942, following the sale of the business, Salmons & Sons was renamed Tickford, and after the War the company continued to produce coachbuilt bodies and conversions for manufacturers such as Healey, Alvis and Humber.

Until the purchase of Tickfords by David Brown, Aston Martins were built in three different locations: the chassis in Huddersfield, bodywork by Mulliners in Birmingham and the remainder of the car at Feltham in Middlesex.  The Tickford site in Newport Pagnell, with its skilled workforce, offered an opportunity to bring production to a single location.

The DB2/4 MkII was the first Aston Martin to be manufactured at the Tickford Street site, and later models included the DB5, DB6, DBS, Vantage, and Lagonda Rapide.  From 1969 – 1989, the Aston Martin V8 was produced at Newport Pagnell in all its various guises; and these were followed in the 90s by the Virage and Vantage models.

With production of the new DB7 in 1994 being transferred to a new facility at Bloxham, the last Aston Martins to be made in Newport Pagnell were those in the Vanquish range, whose manufacture ceased in 2007.

Shortly after this, Aston Martin sold the premises on the north side of Tickford Street for development.  The buildings on the south side, however, remained in the company’s hands and are now known as Aston Martin Works, the company's centre for the sale of new and used cars, and for the service, maintenance and renovation of all models.

In December 2016, Aston Martin announced plans to build 25 new DB4 GTs at Newport Pagnell - the same number as were produced between 1959 and 1963.  The manufacturer hopes that the new cars, known as continuation models, will reflect modern developments in engine performance and also retain all the characteristics that made the cars so universally famous.