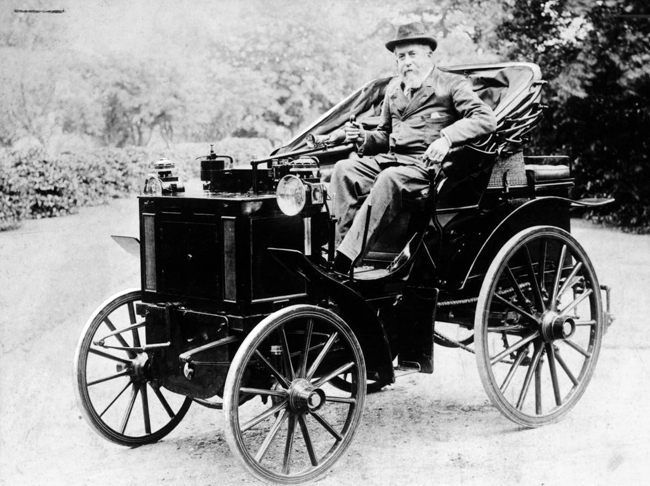 The often-quoted starting point of the first recorded motor car journey in Britain.

Commentary
On the 29th June 1895, the Hon Evelyn Ellis purchased a 3¾ h.p Panhard-Levassor motorcar from the company’s factory at 19 Avenue d’Ivry in Paris. Generally described as a dogcart, it was powered by a two-cylinder 1290cc petrol engine of a Daimler design, made by Panhard-Levassor under licence.  Steered via a tiller, the car was initially fitted with wooden wheels and iron-shod tyres. 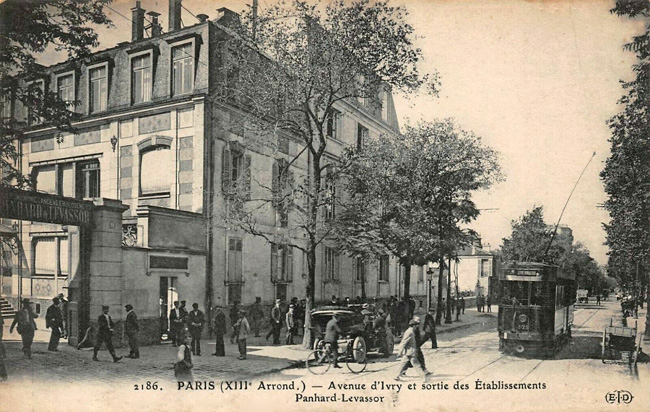 This particular model was different from most early motor cars produced by the company, in that the driving position was on the left-hand side of the vehicle.   It was generally felt at the time to be safer for the driver to follow the nearside edge of the road and so, given that he would be taking the car to England, Evelyn Ellis, not unreasonably, specified left-hand drive.  (By contrast, drivers in France and a number of other countries, particularly during the early years of motoring, frequently sat on the right.)

The next part of the story, however, is a little less clear.  The generally accepted view is that from Paris, Evelyn Ellis drove his new car to the port of Le Havre, via Rouen, a distance of about 125 miles.  After the crossing to Southampton, it is said that the Panhard-Levassor was loaded on board a train and taken to Micheldever Station, in Hampshire, from where the famous journey began.  However, some details of this account have been challenged.

A week after the announcement of Evelyn Ellis's death in 1913, a short letter appeared in the London Evening News written by Florence van Toll, stating that her late husband, John van Toll, "went with Mr Ellis to Paris and brought back the Panhard".  At the end of her letter, Mrs van Toll added, "On arriving in England, the car was driven direct to Datchett", bringing in to question whether the famous journey began in Southampton or Micheldever Station.

As his name suggests, the Honourable Evelyn Ellis was a member of the English aristocracy, the sixth child of Lady Lucy Cavendish-Scott-Bentinck and Charles Ellis, Sixth Baron Howard de Walden. 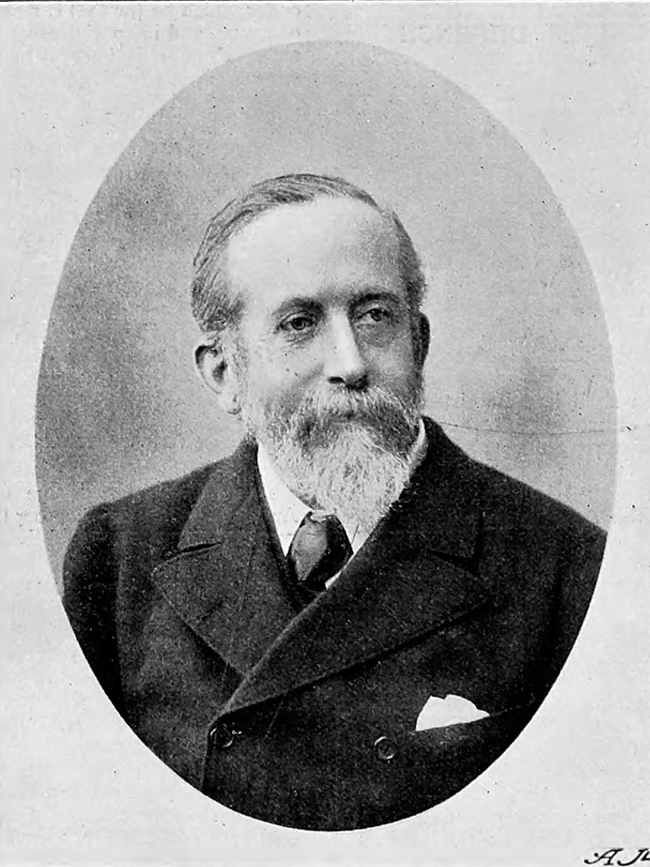 Born in 1843 in Lisbon, where his father was British Ambassador, Evelyn Ellis served in the Royal Navy as a young man, reaching the rank of lieutenant.  In 1879, land and buildings in central London owned by his uncle, the Fifth Duke of Portland, passed to his mother.  The Portland Estate, as it was known, covered an area of 92 acres between Regent’s Park in the north and Oxford Street to the south, and was undoubtedly one of the most prestigious areas of London.  Although the title and custody of the Estate did not pass directly to Evelyn Ellis, he nevertheless appears to have been a man of some means, and well able to live the life of a Victorian Gentleman.

In 1882 he married Alberta Hardinge, who was 18 years his junior.  A year or so later they moved to Rosenau, a large Thames-side villa, situated just to the south of the Berkshire village of Datchet, and it was to here that Evelyn Ellis drove on his historic journey.

Although the details of the 56-mile drive from Micheldever Station to Datchet are well known, the background to Evelyn Ellis’ involvement is less often recorded.

By the late 1880s, motor-boating had become a major pastime for Ellis.  In 1887 he had bought from America a river launch powered by steam, generated from naphtha.  After collecting the boat from the docks in London, he piloted the launch himself up the Thames to Datchet.  The boat turned out to be a great success – so much so, that he bought another; and from 1890 employed an engineer from the Yarrow torpedo-boat works in Poplar, to undertake the vessels’ maintenance and upkeep. 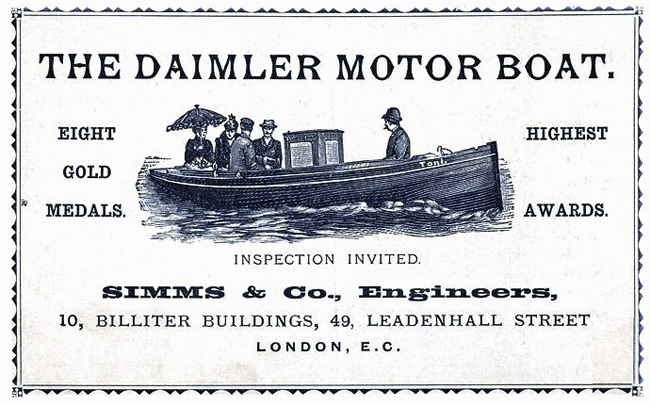 In all probability, it was this interest in motor-boats that first brought Evelyn Ellis into contact with Frederick Simms.  German-born had Simms first met Gottlieb Daimler in the 1880s at an exhibition in Bremen, from which the two men formed a strong business and personal friendship.  By 1890, Simms had become a director of Daimler Motoren Gessellschaft of Cannstatt, with control over the Daimler (and Maybach) patents in Britain and much of its Empire.  However, the restrictions placed by British law at the time on the development of the motor car led Simms, initially, to turn his attention to boats and stationery engines.

In May 1891, Frederick Simms gave his first demonstration in Britain of the Daimler motor boat on the River Thames.  The safety and economy of the Daimler engine clearly impressed Evelyn Ellis, to the point that, eighteen months later, in October 1892, the engines in both his naphtha boats were replaced with Daimler motors, one with an output of 10 h.p.

Whether this was the start of Evelyn Ellis’s links to Daimler is not known, but over the next few years he certainly became a valued customer and investor.  In 1894 he visited the Daimler works in Cannstatt to understand how the engines were used to power road vehicles, and within a year had bought his own Daimler-engined Panhard-Levassor.  He had also become a major investor in Daimler Motoren Gessellschaft.  It was in 1893 or '94 that John van Toll joined Frederick Simms as a mechanic and began helping Evelyn Ellis with his motor-boats.

The famous journey from Micheldever to Datchet was, almost certainly, part of a wider campaign to promote the motor car and to change the law as it then stood.  Motor-historian, Tom Clarke, is clear that the Panhard was driven from Southampton to Micheldever, and not carried by train, as is commonly stated, and that Frederick Simms probably joined Evelyn Ellis at Micheldever Station.  In fact, a report in the Hampshire Chronicle indicates that on the day before the historic run, Evelyn Ellis had taken the stationmaster "out for a few miles into the country".

However, although there remains a question of exactly how many people were in the car, it is accepted that, at 9.26 am on the 5th July 1895, Evelyn Ellis in the company of Frederick Simms drove away from Micheldever Station at the start of their 56-mile journey.  Describing the drive, Frederick Simms reported that, passing through Basingstoke, Blackwater, Bagshot and Virginia Water, they reached Rosenau at 5.40 pm.  Travelling at between three and twenty miles per hour, (largely dependent on the terrain and the presence of horse-drawn traffic), they achieved an overall average speed of 9.84 mph, after stops for refreshment, oil and water.

It is interesting to note that despite failing to have anyone walking ahead of the car carrying a red flag, and travelling at speeds well in excess of the speed limit, there were no reports of any kind of intervention by the police.  It’s generally held that one reason why the two men undertook the drive was in the hope of being stopped and taken to court; something that they believed would create further publicity for their cause. 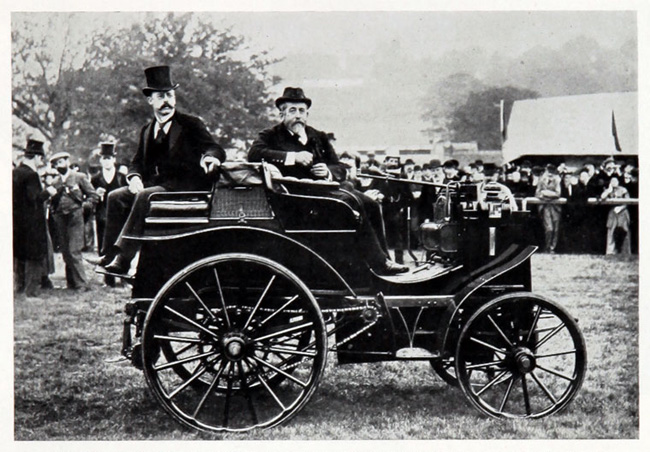 The trip itself was widely reported in the British press and, for a while, Evelyn Ellis remained a prominent figure in the motoring world.  In October 1895 he took the Panhard-Levassor to the first British Motor Show, held at Tunbridge Wells, organised by Sir David Salomons.  In February of the following year, at a private showing of a motor exhibition at the Imperial Institute in London, he gave HRH Edward, Prince of Wales his first ride in a motor car around the West Garden quadrangle.  The demonstration included a ride up a ramp to the upper terrace, a gradient of about one in ten, “to show that hills were not obstacles to be feared”.

The event had been organised by the newly-formed Motor Car Club, of which Evelyn Ellis was an inaugural member.  Later in the year, the Club was also responsible for staging the London to Brighton Emancipation Run.  Once again, Evelyn Ellis drove his Panhard-Levassor which, by this stage it is thought to have covered a distance of some 2,000 miles, which included a journey from Marseilles to Le Havre.  On the route to Brighton, however, Ellis was out of luck.  Thanks to a faulty ‘speed lever’ he didn’t reach the town until well into the evening, unfortunately too late for the celebration dinner. 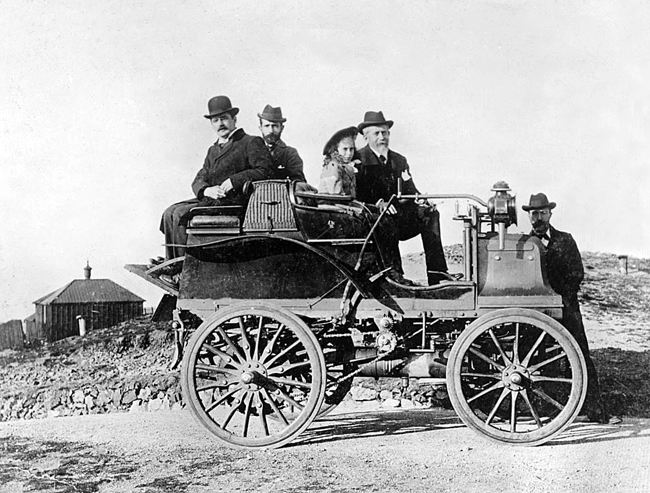 In 1897 Evelyn Ellis purchased a 4½ h.p Coventry Daimler, with which he ascended the Worcestershire Beacon in the Malvern Hills; the last section of which had a gradient of 1 in 5.  Subsequently he acquired an 8 h.p Panhard-Levassor and a 12 h.p. Coventry Daimler, together with a collection of six motor tricycles!

He also met and entertained Gottlieb Daimler in Malvern, where Ellis’s mother lived.  After lunch, the two men decided to go for a drive in one of the Daimler-engined cars but, to the frustration of both inventor and owner, they just couldn’t get the car to start. At the point at which they were about to give up, Ellis slapped the engine with the tool that he had in his hand – with the result, of course, that the engine immediately started; the blow had apparently dislodged some soot from one of the breathing pipes.

Although the significance of Evelyn Ellis’s drive was not queried at the time, in October 1903, an article published in The Autocar, headed ‘A Pioneering Automobilist’ stated that the first person to import a car to Britain and to drive any distance on the road was Henry Hewetson; who, it explained, had imported a 1½ h.p Benz towards the end of 1894.  The claim was repeated in 1906 by Hewetson himself in a chapter he wrote for Lord Montagu’s book ‘A History of the First Ten Years of Automobilism’.

However, from a detailed study of the Benz sales’ records from 1894 -95, the motor historian, Malcolm Jeal, established that the invoice number on Henry Hewetson’s  car was for a 1½ h.p Benz that left the Mannheim factory on the 29th November 1895.  It was, Malcom believed, not the first, but the sixth car to be imported into Britain. 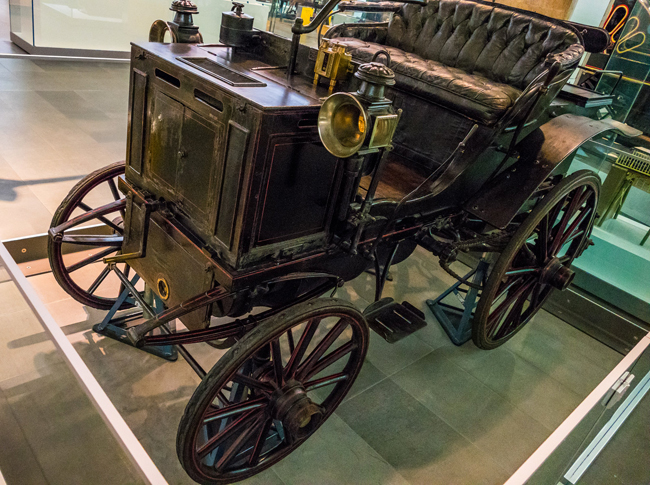 By the early 1900s, Evelyn Ellis had become far less involved in motoring affairs, possibly due to ill-health.  In 1908, the house in Datchet was sold and by 1911, he appears to be no longer living with his wife.  In fact the census details for that year place him in a hotel in Weymouth in Dorset, with his occupation listed, rather unkindly, as ‘loafer’.

Evelyn Ellis died on the 5th September 1913 at the Grand Hotel in Plymouth, where he had reportedly lived for the previous 14 months.  At some stage before his death his first Panhard-Levassor passed into the hands of a neighbour, Arthur Vaughan-Williams of Manor Lodge, Old Windsor.  In 1913, Mr Vaughan-Williams donated the car to the Science Museum in London, where it still may be seen today. 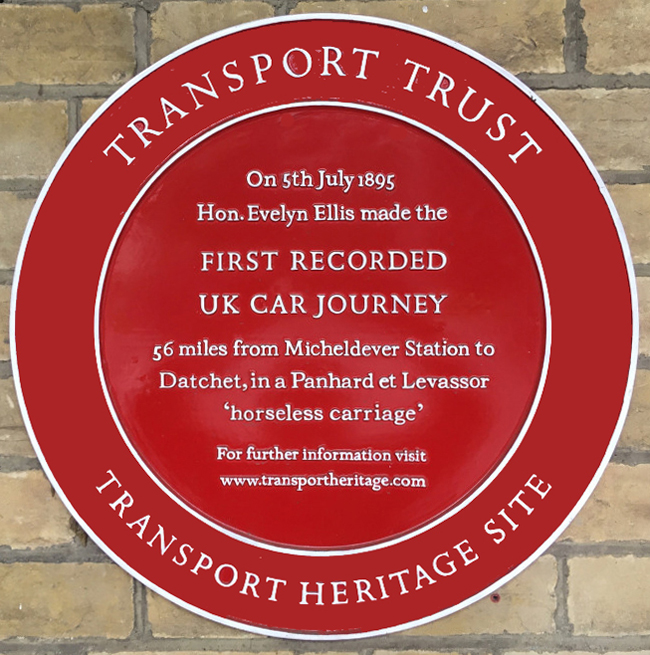 The starting point of the first recorded motor car journey in Britain.