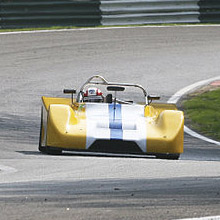 Date
The circuit was first used for motorcycle racing in 1934, but the first car meetings did not take place until 1952.  The circuit continues today as a venue for both cars and bikes.

Commentary
In 1926, Mansfield Wilkinson bought a piece of land adjoining his farm just outside Louth.  It was the former landscape park of Cadwell Hall, and Mr Wilkinson intended to use it for rough shooting.  By 1934, however, his son Charles, founder of the Louth and District Motorcycle Club, had persuaded his father to let him use the park for racing.

Initially, the circuit comprised a chalk track laid around the old manor house, but gradually it was surfaced and extended to a length of 1¼ miles in 1952, and 2¼ miles in 1961.  The track’s first major car race was held in 1962. 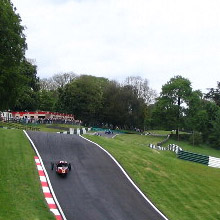 Cadwell Park, unlike those circuits developed from old air bases, features sharp changes in gradient, with a steep valley and one section, known as The Mountain.  Sometimes described as a mini-Nurburgring, the track is relatively narrow and twisty, and lacks the wide open spaces and generous run-offs found on other circuits, and for this reason its programme is confined to motorcycle racing and smaller car championship events.

The memory of the Wilkinson family lives on with three sections of the track named after family members - Mansfield, Charlies, and Chris Curve.