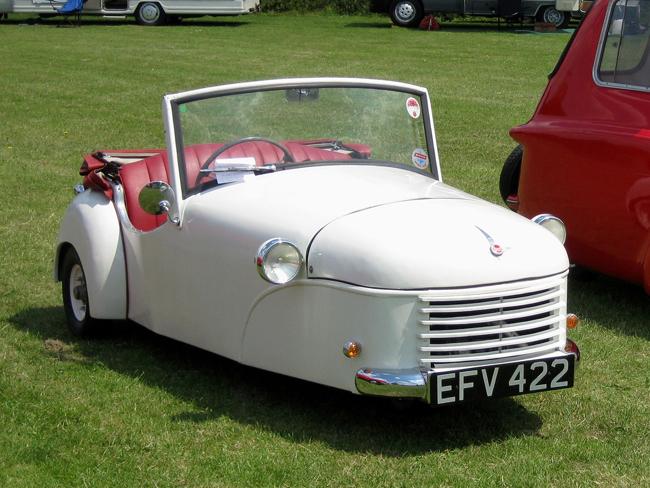 The home and workshop of Lawrie Bond, engineer and designer of the Bond Minicar.

Commentary
Although probably best known for his design of Britain’s first microcar, Lawrie Bond was involved with many other engineering projects: on two, three, and four wheels.

Born on the 2nd August 1907 at 5 Penwortham Hill, Preston, Lawrie was the first child of Frederick and Margaret Bond.  After attending Preston Grammar School, he served an apprenticeship with the local steam wagon manufacturer, Atkinson & Co.  In his early twenties, he moved south to Wolverhampton to work in the drawing office of Henry Meadows Ltd, suppliers of engines and gearboxes, later marrying and going to work for the Blackburn Aeroplane and Motor Co., at Brough, in East Yorkshire.

By the outbreak of war, in 1939, he had moved back to the north-west, living in Whiston on Merseyside, and working as chief engineer and general manager of an aero engine and aircraft component factory.  In 1944, he established his own business, the Bond Aircraft & Engineering Co. (Blackpool) Ltd., making aircraft and vehicle components for the Ministry of Supply, with a workshop, just outside Blackpool, employing between 20 and 30 people, and an office in the town centre, on Queen Street. 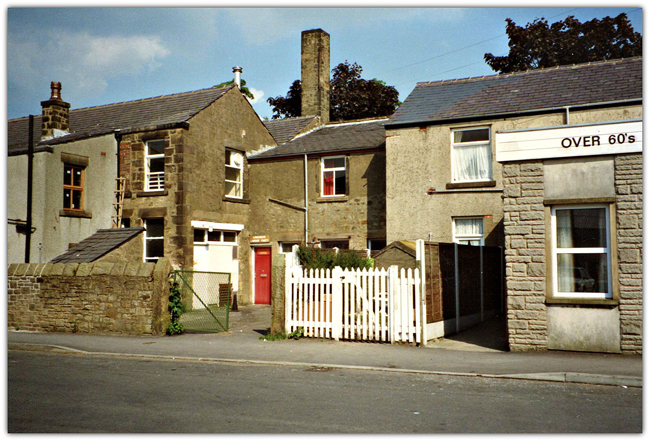 After the end of the War in 1945, the government contract inevitably came to end, and in 1947 the Blackpool premises were closed, with business being transferred to Towneley Road, Longridge, a few miles from where Lawrie Bond had grown up.  In the same year, he married for the second time - to Pauline Freeman; their first home was the flat above the workshop on Towneley Road.

It was also at this point that he began putting his many ideas for car and motorcycle design into practice.  One of his first projects was a tiny 500cc, single-seater racing car, which he would test outside the workshop and along the road out of Longridge towards Jeffrey Hill. 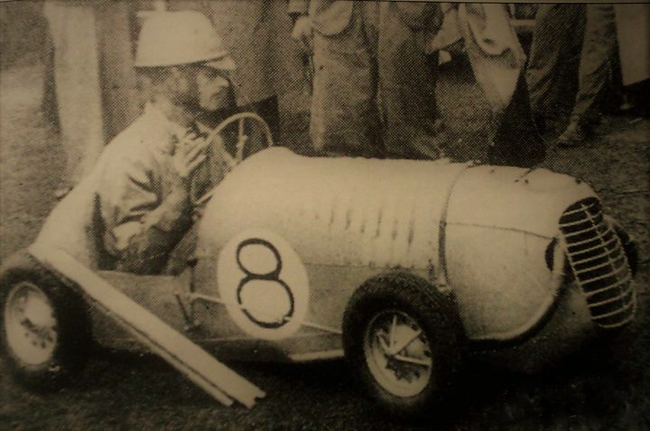 Powered by a pre-War, 499cc Rudge-Whitworth Ulster motorcycle engine, driving the front wheels, the car was seven feet long and stood just 23 inches high.  It had no suspension other than through the tyre walls of its four tiny wheels.  Nicknamed ‘doodle-bug’, reports suggested it was capable of speeds of up to 100 mph.  On its first outing at the Shelsley Walsh hillclimb, in June 1947, the little car, painted bright canary yellow, came fifth, out of eight, in the 500cc class, crossing the finishing line at over 85mph.  Talking to a local reporter afterwards, Lawrie Bond explained that he had not raced for twelve years (nothing seems to be known of his previous racing history), and that the car had only been tested for the first time two nights before the race, over a distance of 200 yards.

A month later, the car was in action again, at the Bouley Bay hillclimb on the island of Jersey, and with more success.    Now, nearly 40 years of age, Lawrie Bond came first in the open 500cc class, and also won the non-supercharged 750cc and 1,000cc classes.  However, his luck ran out at the end of September when he was once again back at Shelsley.  Coming out of an S-bend, he struck the nearside bank and overturned, trapping him beneath the car.  The Coventry Telegraph reported, somewhat unsympathetically: “What looked like a serious accident ended in Bond walking away with cuts to the head a few missing teeth.” Sadly the car was a write-off, but at least it was light enough for the marshals to be able to lift it up and carry it off the track. 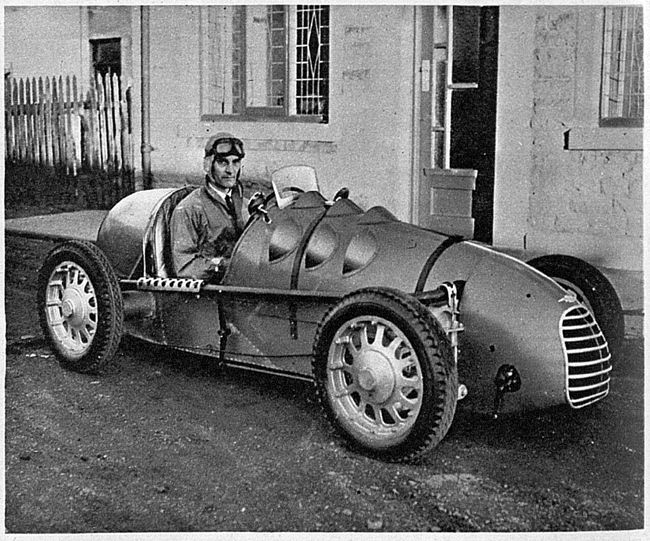 With revised technical rules governing 500cc racing for the 1948 season, Lawrie Bond set about designing a completely new car.  Known as the Type C Bond it, once again, used a lightweight aluminium body built around an alloy frame, supporting the 497cc J.A.P (J.A.Prestwich) engine and independent front suspension.  Like the ‘doodle-bug’, it was extremely light.  Its dry weight of 398lb meant that it was fitted with detachable ballast in order to ensure the car met the new minimum weight requirement of 500lb.  Although the Type C was well received, it achieved relatively little sporting success; no doubt, partly due to the new all-conquering Coopers.  Just three cars are believed to have been built.

All the accounts of Lawrie Bond’s life stress his active and creative mind; a man with many projects on the go at the same time.  Not all were successful, or even completed, but he was never short of ideas; and it was in the late forties that the big idea, for which he is probably best known - the Bond Minicar - came to fruition, launched in late October 1948. 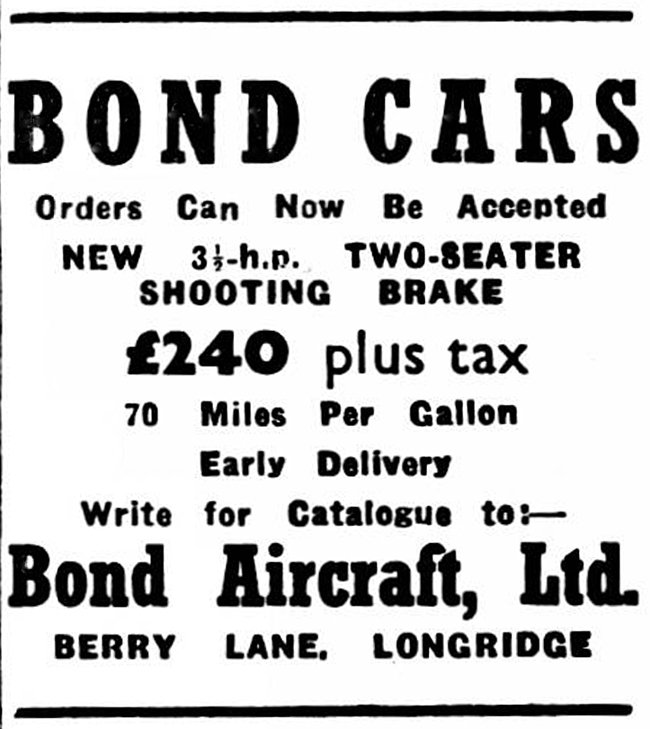 A prototype, described as the Bond Shopping Car, had been shown to the press May 1948 in order to test the commercial potential for such a vehicle. Lawrie Bond’s wife, Pauline, was reportedly instrumental organising in this; having previously worked in Fleet Street, she was able to draw on her numerous press contacts to publicise the venture.  Interestingly, there are earlier press reports in September 1947 of Bond launching a new 3½ h.p shooting-brake, named in one paper as the Bond Brakette.  It has not been possible to find any photographs of this; therefore it may well be the Shopping Car by another name, or perhaps a variation on the design. 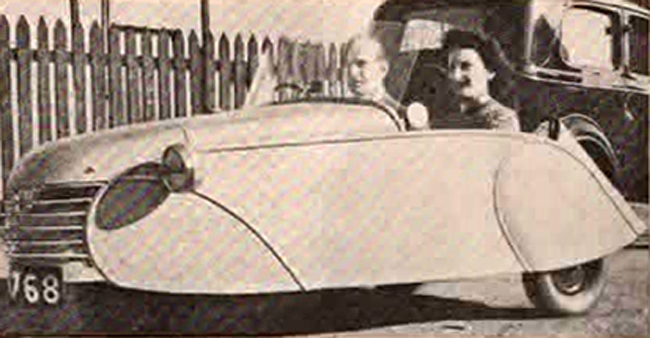 The Shopping Car was powered by a 122cc Villiers motorcycle engine, developing 4.8 bhp.  With an aluminium semi-monocoque body, it weighed under 200 lbs and was just eight feet in length.  With strict post-War petrol rationing still in effect in Britain, the London Daily News saw the car as a viable option for the small family.  After two days of testing, it reported that, on the standard monthly three-gallon petrol ration, the three-wheeler could cover a distance of 300 miles “humming around the countryside at 30 mph and climbing gradients of up to one in four”. Running costs were described as infinitesimal, adding: “There is nothing to go wrong”.

Lawrie Bond had built the body of the prototype on the first floor of the Towneley Works, and then lowered it through a trap door to the workshop below.  Although this was perhaps manageable for one-off models, it was clear that if the car was to be produced in any kind of numbers, much larger premises would be required. 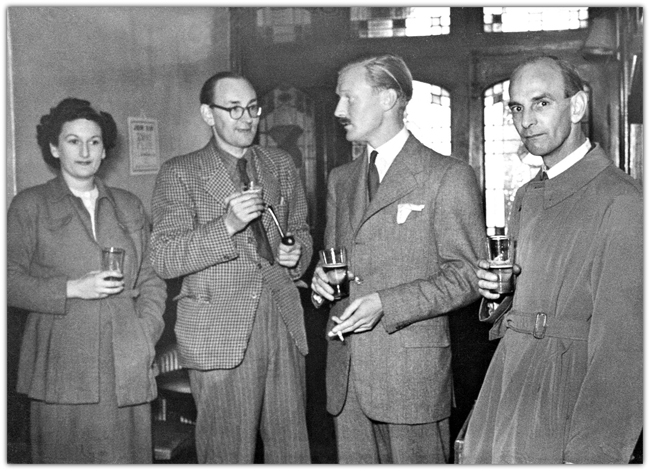 During the War, the Preston firm of Sharp’s Commercials Ltd. had government contracts to repair damaged military vehicles and to assemble and supply the Army with Chevrolet trucks from imported knock-down kits.  With the end of hostilities, much of this work came to an end, and Bond knew that Sharp’s were almost certainly looking for some form of replacement income.

With this in mind, he approached Lt Col Gray, managing director of Sharp’s, asking if he might be able to rent the company’s building on Ribbleton Lane in Preston in order to get production of his Shopping Car underway.  Although Lawrie Bond and Col. Gray, both lived in Longridge and knew one another socially, Gray was not impressed by this proposal.  But, true to form, Bond was reluctant to take “no” for an answer, and used his links with the family who owned Sharp’s to have his idea taken more seriously. 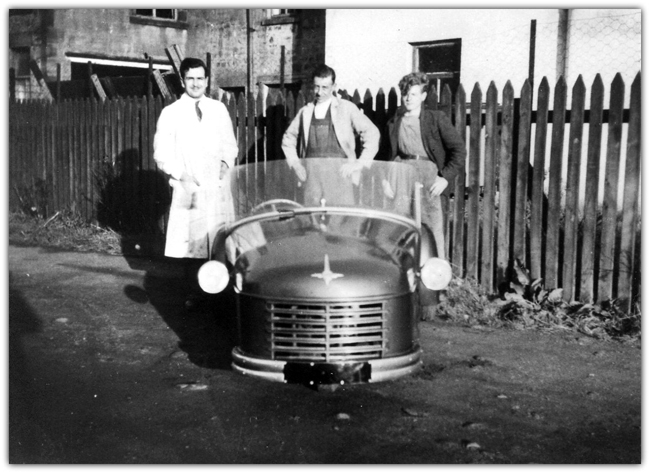 Although Col Gray was not prepared to lease his premises to Bond, he did recognise that the little car had some potential.  He suggested instead that the three-wheeler should be manufactured by Sharp’s themselves.  There was one key condition however, and that was that there should be further development of the initial design in order to produce a reliable and commercially viable product.  Work began on this immediately and, less than six months later, the new and revised Bond Minicar was officially launched.

Full Minicar production began in early 1949.  Initially Lawrie Bond received a small royalty on each car sold, but although he remained an advisor to the company, it wasn’t long before he sold the design and manufacturing rights to Sharp’s, who continued to produce the vehicle under the Bond name. 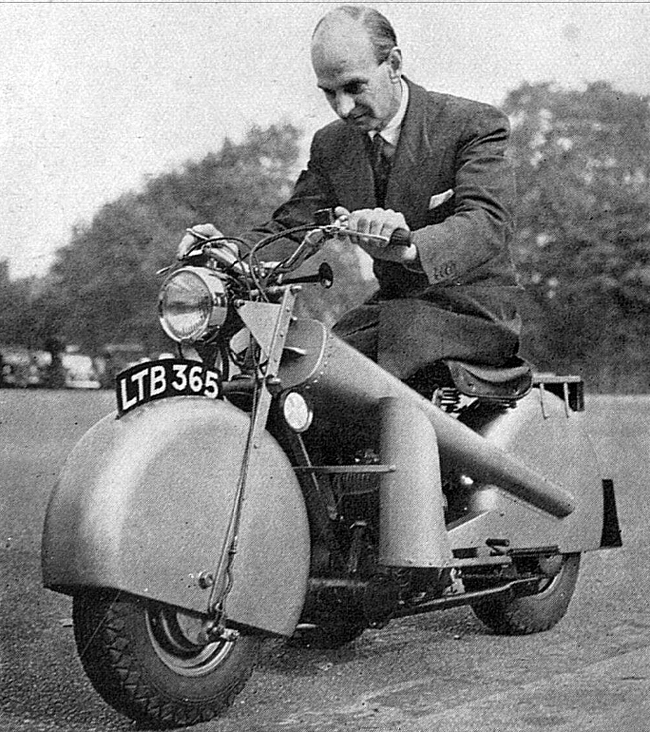 Bond now turned his attention to other projects.  The first was the Bond Minibyke; a 98cc machine with an aluminium frame in which the diagonal tube from the handlebars down to the rear mudguard acted as the fuel tank.  Manufactured at the Towneley Works in Longridge, it sold for £55 plus purchase tax.  In 1950 the production rights were sold to Ellis (Leeds) Ltd, a manufacturer of textile machinery, who continued to produce the Minibyke until 1953.

Two further motorcycle designs followed under the name BAC (Bond Aircraft and Engineering Company).  The first was the Lilliput; which, as its name suggests, was a small machine with a 98cc engine and 20” wheels. Designed with the flat dweller in mind, it was light enough to be carried up stairs.

The second was the Gazelle scooter; reportedly, the only British-made scooter at the 1951 Earls Court Motor Cycle Show.  In common with many of Lawrie Bond’s designs, it had a number of unusual features, including the use of the rear frame tubes as exhaust pipes.  With relatively few sales, the design and manufacturing rights of the Gazelle were once again sold; this time to Projects and Developments Ltd, based in Hodson Street, in Blackburn.  Funded by Dennis Poore, a friend of Lawrie Bond, businessman, and one-time racing driver, the original design was extensively re-worked.  The outcome was the fibreglass-bodied Oscar, which was once again well-received by the motoring press, but did not progress into production.

In the summer of 1953, Lawrie Bond sold the Towneley Works and moved south, with Pauline, to a house on New Road in the village of Wormley, near Godalming in Surrey, to work as a freelance designer. 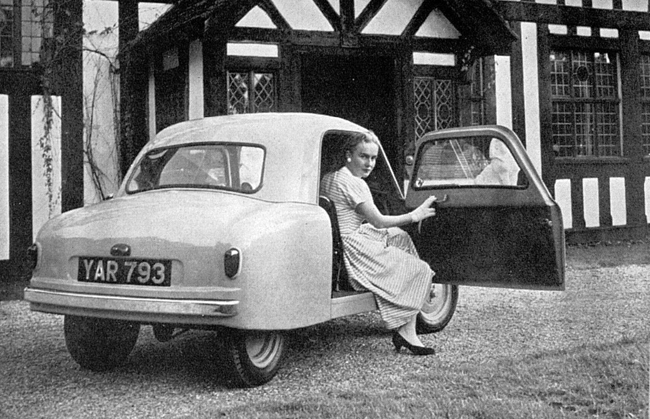 His subsequent work included the design of the lightweight Sherpa Scooter (1955), the Berkeley sports car (1956), and the Opperman Unicar (1956).

In 1956, he bought a garage in the village of Loxwood in Sussex, setting up as Lawrence Bond Cars Ltd.  In 1960, he designed and built a new front-wheel drive Formula Junior Car.

Sharp’s continued to build (and update) the Bond Minicar until 1966, although it had become clear, for some time, that the company’s future lay in producing more mainstream models.  To this end, Lawrie Bond was commissioned to style Bond’s first four-wheel production car, the Bond Equipe GT.  The attractive two-door sports coupé was based on the Triumph Herald chassis and running gear and was launched in October 1963. 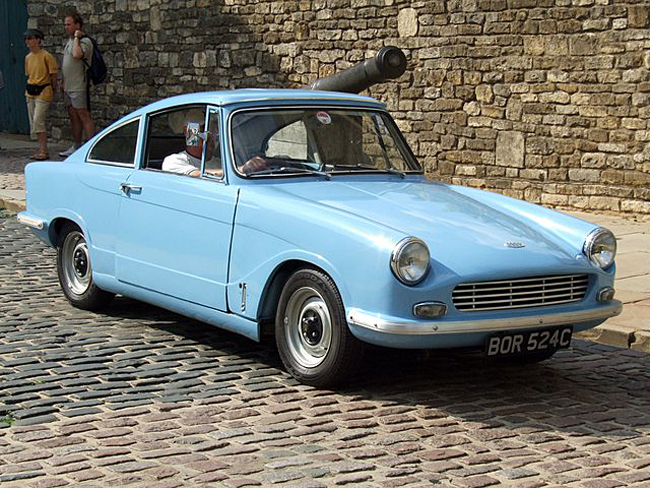 His final link with Sharp’s and Bond Cars was with the Bond 875; a completely new three-wheeler, using the 875cc Hillman Imp engine.

In 1965, Lawrie Bond moved to North Yorkshire to run the Bowes Moor Hotel, located on the A66, and today (2022) a private house.    In 1974, he moved to Ansdell, a few miles south of Blackpool in Lancashire, but shortly afterwards died, at the age of 67.
Much of the information in this article is drawn from Nick Wotherspoon’s two excellent books, listed below. 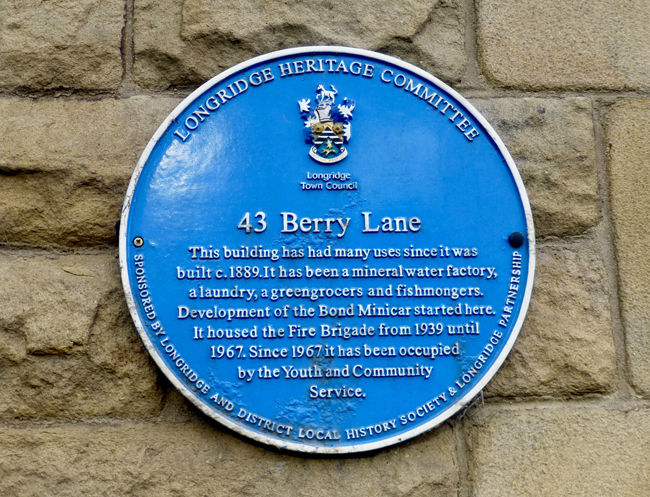 The home and workshop of Lawrie Bond, engineer and designer of the Bond Minicar.