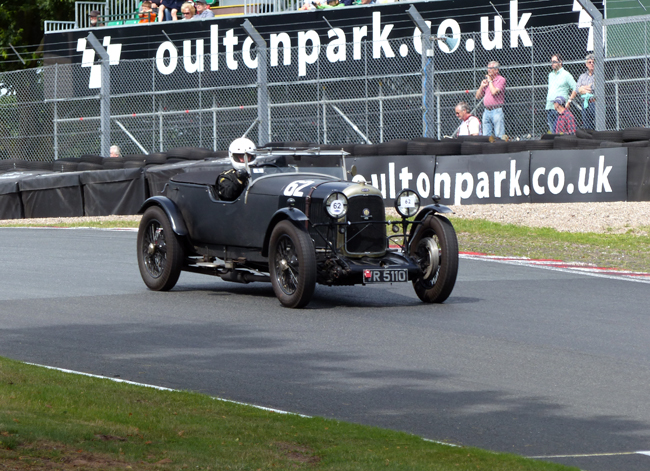 A challenging parkland circuit, and the major motor sport venue in the North West.

Commentary
Oulton Park Circuit stands in what were once the grounds of Oulton Estate, a magnificent park and, for over 400 years, the home of the Egerton family.

Following a fire in the original Tudor house, built in 1530, the construction of a brick and stone hall in Palladian style was begun in the early part of the 18th century.  Almost 200 years later, the house was used as a hospital during the First World War, and then leased by Sir Philip Grey-Egerton to Mr F W Cooper, managing director of the Partington Steel and Iron Company.  It was during this period that the Hall was burnt down - for a second time.

Fire was discovered in one of the upper rooms at around 10.30am on the morning of February 14th 1926.  The Cooper family were able to leave the house in safety, and some of the many valuable pieces of furniture and pictures were also brought out; however, the entire house was soon ablaze, and efforts to contain the fire were hampered by lack of water.  It appears that a group of about 25 people volunteered to go back into the building to try to save more of the house’s treasures, but as they were trying to clear the saloon and ballroom, the roof of the building collapsed under the weight of the 30,000-gallon lead water tank.  Those nearest the windows were able to escape, but others were not so lucky.  Six people died, including one of the fire fighters tackling the blaze.

The Hall remained a ruin for many years.  During the Second World War, the building was hit by two enemy bombs and the grounds were to billet servicemen from France, Poland and the United States.  When the Estate was returned to Sir Philip Grey-Egerton in 1950, it was – by all accounts – a mass of rubble and debris.  It did, however, contain a number of newly installed service roads, and it was these that enthusiastic members of the local Mid-Cheshire Car Club (MCCC) decided to use as the basic outline of a new circuit.

In March 1953, the Motor Sport magazine published an appeal from MCCC for volunteers to help clear the roads on the estate and mark out the track.  A new surface was laid a couple of months later, and the first race meeting was held on August 8th 1953.  It was, however, a closed affair; in order to test the organisation and suitability of the track, the RAC did not allow the public to attend.  Nonetheless, about 3,000 club members and guests were admitted.

The first public race meeting was held two months later, on 3rd October, attracting a crowd of 40,000.  By the start of the next season, the circuit had been lengthened from 1.5 to 2.3 miles, with the addition of the long hairpin loop.  A small extension to the track was made in late 1954, and a short 1.6 mile circuit introduced in 1975, with a layout similar to the original track.

Further details
• www.oultonpark.co.uk
• Footage of the opening event is available on YouTube, https://www.youtube.com/watch?v=_Ghri1Wrhf0