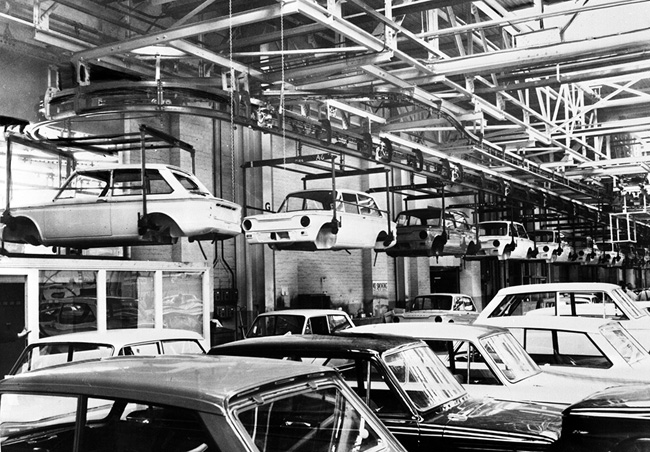 One of the four factories once operated by the British car body manufacturer, the Pressed Steel Company Ltd.

Commentary
The Pressed Steel complex at Linwood was originally developed in the late 1930s, as part of the shadow war factory programme, for the manufacture of special steels and gun barrels.  It was managed by the Glasgow engineering company, William Beardmore.

However, in 1947, the Board of Trade allocated part of the factory to Pressed Steel, which was already a major producer of body panels for the car industry.  The Government of the day was anxious to combat the problem of high unemployment in the area, and offered Pressed Steel generous terms to move to Linwood.  It also appears to have placed few conditions over what was manufactured at the plant.  Pressed Steel initially manufactured railway rolling stock but, with a decline in orders, transferred production to body panels for Ford and BMC lorry cabs.

By the 1960s, the factory was also producing bodies for Rover and Volvo – and for the new Hillman Imp, which was being assembled in a brand new factory just across the road.

Sales of the Hillman Imp, launched in 1963, fell someway short of what was hoped and Rootes soon fell into financial difficulties.  In 1964 they received an injection of capital from Chrysler, with 30 per cent of Rootes’ shares going to the US company; by 1969 they had come under full Chrysler ownership.

The purchase of the Linwood plant provided Rootes Chrysler with the means to produce all their own body panels, ensuring that they were no longer dependant on an outside supplier.  However, for Pressed Steel workers at Linwood, the flip-side of this was the loss of all the other work that they were used to doing: body panels for other car companies, specialist railway wagons and refrigerated trailer production.

During the 1970s Chrysler UK’s (and Chrysler Europe’s) finances steadily worsened, and in 1978 both the UK and European operations were sold to Peugeot-Citroën (PSA).  The French company embarked on a process of contraction and closure within the UK; in February 1981 they informed the British government of their plan to shut down the entire Linwood operation in May of the same year.

The impact of this closure on the local community was huge; several thousand people lost their jobs, local businesses closed or re-located out of the area, and the town centre became a derelict and hazardous site.

In 2011, Linwood received the Carbuncle Award by the architectural magazine, Urban Realm, for being the most dismal town in Scotland.  Since then, however, major redevelopment has occurred, including new housing, schools, and town centre regeneration.

One of the four factories once operated by the Pressed Steel Co Ltd.