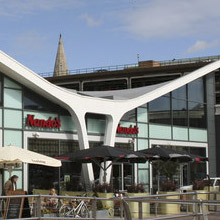 A former garage and showroom with a striking roof design.

Commentary
Designed by architects, Sam Scorer and Dr Hajnal-Kónyi, this building had, in 1959, the largest hyperbolic paraboloid roof in the UK.

In her account of Sam Scorer’s life, Karolina Szynalska describes the impact of the garage as it was being built:

“…. it caused a sensation...the construction was of reinforced concrete chosen for its economy, durability and fireproof qualities.

“The local newspaper, the Lincolnshire Echo, received a number of telephone calls from passers-by informing them that the roof had subsided in the middle and was about to collapse.

“The building consists of four concrete hyperbolic paraboloid shells, separated by a roof-light running along the entire depth of the building.

“The roof covered a large uninterrupted floor space 29m by 32.5m and consisted of four 65mm thin shells arranged so that their highest points are at the centre and the four corners of the garage.  At the southern corner of the site there was a circular showroom containing a turntable, with the board room and managing director’s office on the first floor.”

Until relatively recently the building was occupied by Lincoln Music Library.  It became listed in 2000, and today the space is largely filled by a number of restaurants facing the waterfront.

A year after completing the garage and showroom, Sam Scorer and Dr Hajnal-Kónyi produced a similar roof design (also for the Lincolnshire Motor Company) for a service station on the A1, 20 miles away at Markham Moor.

Sam Scorer is remembered today by a memorial plaque on the building and through the Sam Scorer Gallery, also in Lincoln.

A former garage and showroom with a striking roof design.