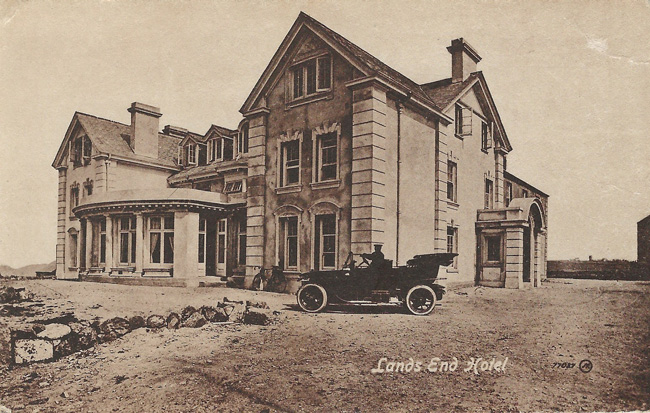 The start (and finishing) point of many 'end-to-end' journeys.

Commentary
Henry Sturmey is regarded as the first person to drive a car the length of Britain; a journey that he completed from north to south in October 1897. Just over three years later, Hubert Egerton undertook a similar drive (ie in the same direction) in his Locomobile steam car.

Surprisingly it appears the south-to-north route was not completed by car until July 1902, when J. W “Jack” Stocks, a famous racing cyclist of the time, took his 8-h.p De Dion from Land’s End Hotel to John o’Groats House Hotel in just under 62½ hours.

Two days before the start of the journey, the car was taken by train from London to Exeter, from where it was driven to Launceston, and then on to Land’s End.

Leaving the Land’s End Hotel shortly before 3am on Sunday 13th July 1902, Jack Stocks and his companion, Roger Fuller, drove northwards for over 16 hours before stopping for the night at Whitchurch in Shropshire, having covered a total of 324 miles.

Departing the next day, again at 3am, the pair motored on through Cheshire and Lancashire towards the Lake District.  After climbing Shap Fell in driving rain, the engine starting handle seized during their stop for a short break in Carlisle, requiring the car to be push-started thereafter.

Perth, in central Scotland, was reached in the early evening and, after obtaining a meal (and petrol) at the city’s Salutation Hotel, the men decided to “abjure further sleep and drive on through the night over the Grampians”.

At 1.30am they stopped for an hour for breakfast, before continuing through Caithness and Sutherland, reaching Wick at 4.20pm and John o’Groats just an hour later.

Their journey had taken two days, fourteen hours and twenty-five minutes, with an actual running time of 48 hours and 37 minutes – at an average speed of 18.26 mph.

Roger Fuller returned home to Surbiton in Surrey by train, while John Stocks opted to drive the De Dion back to London – this time over a period of about five days. 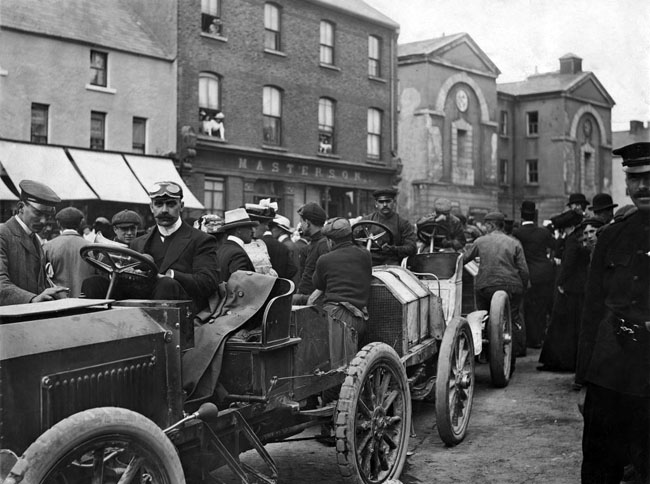 Jack Stocks who, in 1902, had just become the main representative of De Dion-Bouton in Great Britain, continued to be closely involved in motoring.  Having ridden an Ariel Quadricycle in the 1900 Thousand Mile Trial, he won the 1903 Gordon Bennett Eliminating Trial at Welbeck, and afterwards drove a Napier, although without success, in the Gordon Bennett race in Ireland in the same year.

Roger Fuller was also something of a motoring pioneer.  An article published in September 1938 in the Somerset County Herald suggests that it was Roger Fuller's car that was driven in 1900 by S.F Edge in the first ascent (in a motor car) of Porlock Hill - one of the steepest roads in Britain.

The starting point of many 'end-to-end' journeys, including that of the first woman to drive a car from Land’s End to John o’Groats.