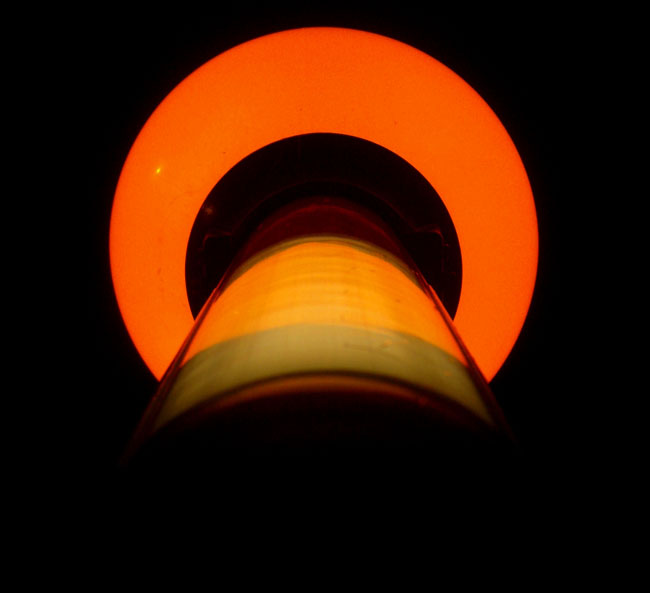 The site of the first Belisha beacon to be installed in Britain.

Commentary
The Belisha beacon was introduced in 1934 by the then British Minister of Transport, Leslie Hore-Belisha.  The first beacon was erected on Kensington Road, on the southern edge of Hyde Park.

Formerly Financial Secretary to the Treasury, Mr Hore-Belisha was appointed Transport Minister on the 29th June 1934. His most immediate and pressing problem was the need to tackle Britain’s appalling road accident rate, with casualty figures far greater than anything we experience today.  In the week immediately following his appointment, 180 people were killed on British roads and nearly 6,000 injured. The combined figures for the whole of 1934 were in the region of 7,000 deaths and 250,000 injuries.

The root of the problem lay in the low level of traffic regulation and roadcraft at the time; there was no compulsory driving test, there were very few markings on the road, and there was often little awareness or understanding (by both drivers and pedestrians) of dangerous situations on the road. 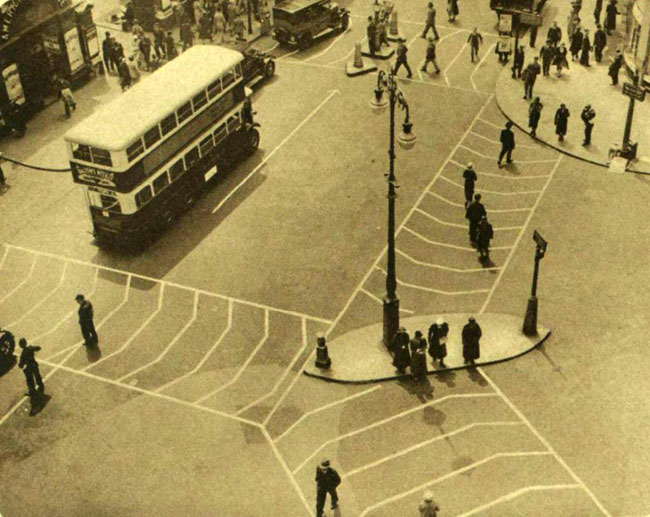 A new Road Traffic Bill, designed to address these issues, was introduced to Parliament earlier in the year by Leslie Hore-Belisha’s predecessor, Oliver Stanley.  The Bill contained a number of road safety measures, including the introduction of a driving test for new drivers, the imposition of a 30mph speed limit in built-up areas, and powers to introduce schemes for crossing places for pedestrians.  (Speed limits for cars on all British roads had been abolished under the Road Traffic Act 1930, largely because they were ignored so much, and leaving things as they were, it was felt, brought the law into disrepute.)

Despite the Road Traffic Bill not becoming law until the end of July, Mr Hore-Belisha wasted no time in experimenting with different types of pedestrian crossings – with an urgency no doubt fuelled by the fact that more than half of all road casualties were pedestrians. 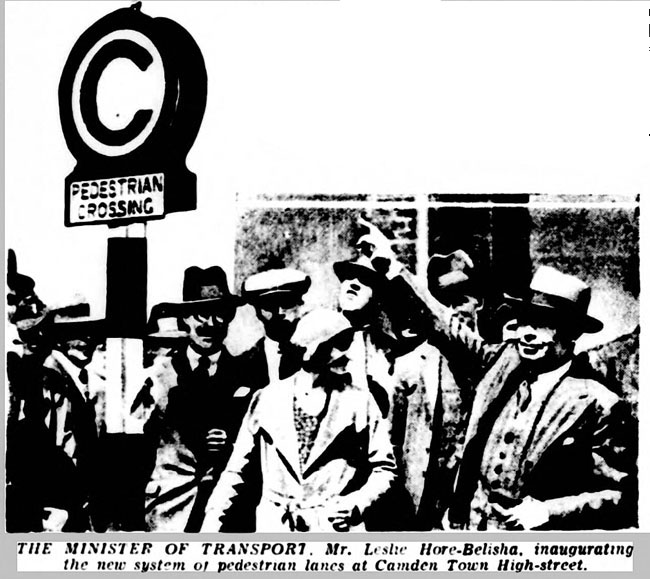 By 9th July 1934, 31 “sanctuary lanes” or “C” crossings were operational in various parts of London.  These comprised red and blue signposts bearing a large white letter “C”, with a herring bone pattern marked across the road.

Over the rest of the summer the scheme was rolled out in various areas outside London, but came to a sudden halt on 18th September when Leslie Hore-Belisha announced the scrapping of all existing “C” crossings, ordering them to be replaced by unilluminated yellow globes atop seven-foot posts, carrying alternate black and white markings.  Four-inch square steel studs, set in lines across the road, showed pedestrians where to cross. 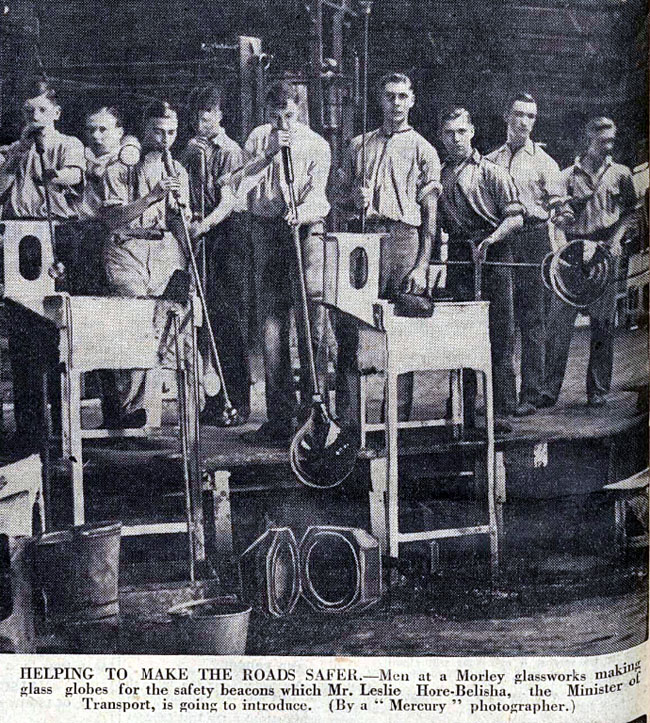 Writing to all London local authorities, the Minister asked them to make every effort to establish a total of 8,000 crossings places (requiring 16,000 globes) by October 27th.  “We can’t afford to wait”, he explained, “On average, four people are killed in London every day, and I look upon these crossings as the pedestrians’ lifebelt.”

The decision to abandon the "C" crossings had only been taken the day before the announcement, and was based on the results of the trials that Mr Hore-Belisha had instigated shortly after he took office.

Although the initial reaction from the London authorities was hostile, the new beacons (nicknamed Belisha beacons by the Press from the outset) were popular with members of the public – although not entirely without controversy.  In his haste to implement the scheme, Leslie Hore-Belisha was sometimes portrayed as something of a dictator. Some argued that the beacons were an eyesore, “so numerous that they have an appearance of an orange grove”, whilst others complained that they were an impediment to both traffic and pedestrians. 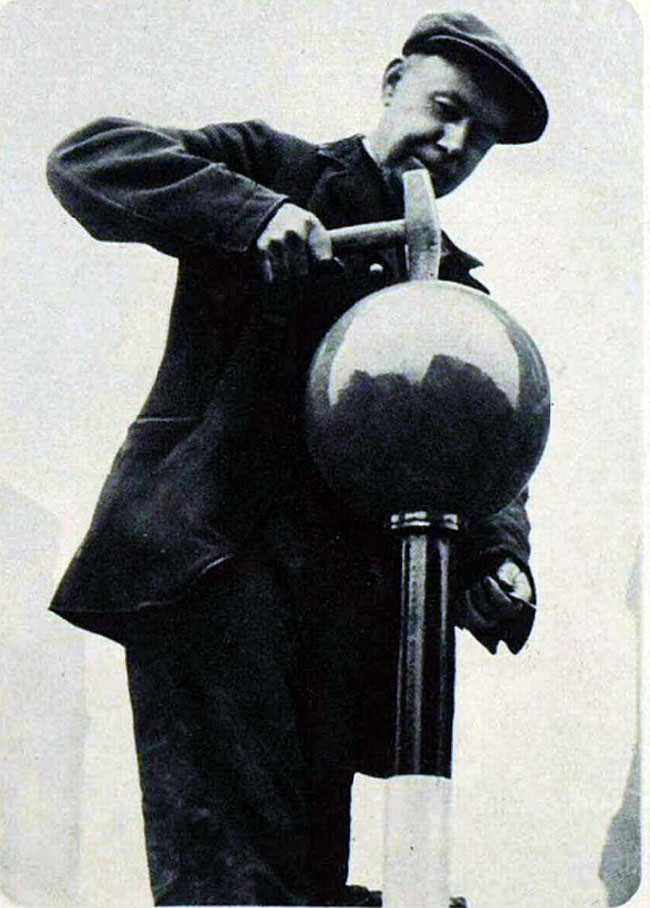 One further, perhaps predictable, outcome of their introduction was that, for a short while, many of the orange globes - initially made of glass - were stolen or damaged by members of the public, usually in high spirits.  A news report on the 1st January 1935 stated that, in the previous three months, a quarter of the beacons in Hampstead (about 160 in all) had been damaged or removed.  Generally speaking, beacons in residential areas were most likely to be targeted. It was not long before the glass spheres were replaced by metal.

As early as 1935, there were calls to illuminate the globes, largely to make crossings more visible at night.  However the Ministry of Transport was reluctant to support this, arguing that an illuminated beacon would throw out relatively little light; suggesting instead that crossings could be made more visible through improvements in street lighting.  Also - given all the vandalism that was taking place at the time - the Ministry was probably reluctant to approve lighting the beacons as the globes would need to be made from glass.

However, one city - Newcastle - did have illuminated beacons; it’s not clear why this was the case, but a certain amount of the initial experimental work on pedestrian crossings took place in the north east – particularly in Sunderland and South Shields.

It wasn’t until after the Second World War that pedestrian crossings finally came to resemble the form with which we are familiar today, with alternate black and white bands running across the road. 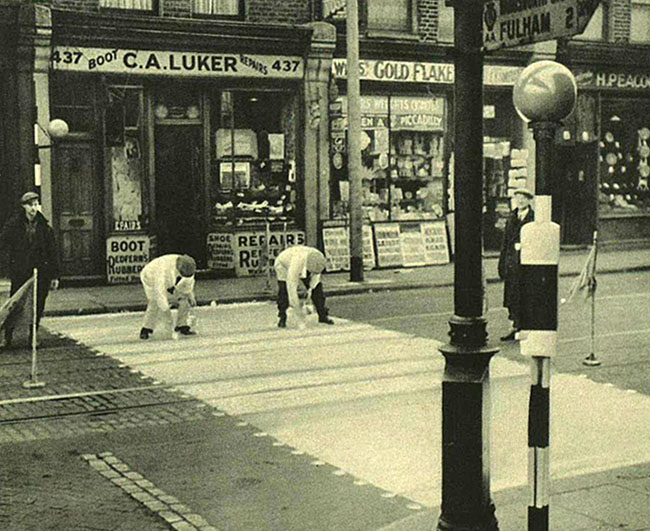 Although experiments had already been undertaken with the colour of the road surface at the crossing, it wasn’t until January 1949 that the idea of painting the road with broad black and white bars was announced.  Immediately known as zebra crossings, they were gradually installed through the country over the next five years – beginning a long tradition in which crossings became named after animals.

As a postscript, there are online references to the first zebra crossing being installed in Slough in 1951.  However, newspaper reports show that, as early as March 1949, a zebra crossing had already been installed – in Newcastle.

The site of the first Belisha beacon to be installed in Britain.