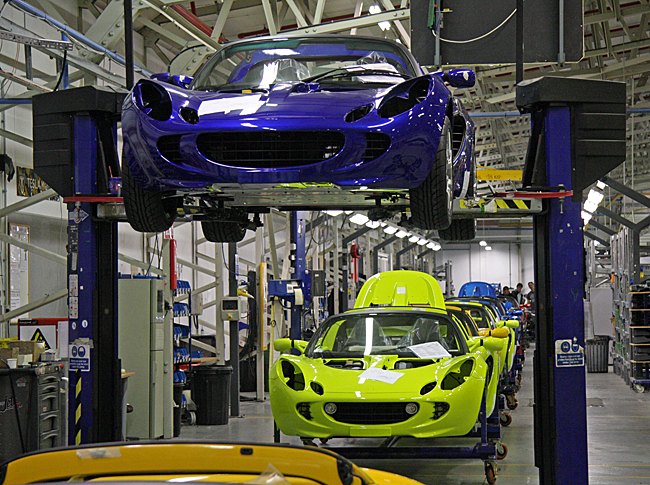 The home of sports and racing car manufacturer, Lotus.

Commentary
Unable to obtain permission from the local council to develop further the Lotus factory at Cheshunt in Hertfordshire, Colin Chapman opted in 1966 to transfer car production almost 100 miles north to the site of a former airbase at Hethel, in Norfolk.

Used during the Second World War by the US Eighth Army Air Force, and later RAF Flight Command, the buildings and the space at Hethel provided Lotus with plenty of scope for expansion, and the opportunity to use parts of the former runway as the basis for a track test facility.

The foundation stone for the new combined, office, assembly and engineering block was laid in July 1966, with the move from Cheshunt to Hethel taking place over a weekend in November of the same year.  Car production at the new site began immediately, and the factory was formally opened in early 1967 by the Right Honourable Peter Walker, MP.

The improved facilities at Hethel enabled Lotus to increase its turnover by 30 per cent within the first year, and by the end of the decade, the company and factory were operating as three distinct sections.  Lotus Cars, producing the Seven, the Elan, the Plus 2 Elan and Europa; Lotus Components, building racing cars for sale; and Team Lotus, running cars in Formula 1, 2, 3, Formula Ford and Formula Junior, sports cars, and Indycar.

The 1970s marked a significant change in the model line-up at Lotus, with the development of a range of more luxurious and high performance cars, notably the Elite (1974), the Eclat (1975), and the Esprit (1976).

It was probably not an accident that this followed a significant change in the UK tax system, which until 1973, had allowed kit cars, ie those sold in component form, to be bought free of purchase tax, usually resulting in a saving of at least 20 per cent on the cost of the factory assembled car.  With the Lotus Seven and the Elan available in kit form and, as well as already assembled, it was perhaps not surprising that in the same year Lotus sold the manufacturing rights and facilities for the production of the Lotus Seven to Graham Nearn of Caterham Cars, who by that stage had become the car’s sole UK distributor.

In 1976, Team Lotus moved their base from Hethel to nearby Ketteringham Hall, which had also been used by the US Eighth Army during the Second World War.

During the late ‘70s and ‘80s, Lotus undertook an increasing amount of contract work at Hethel, notably for Chrysler, in the development of high-performance engines, resulting in a further extension of site. However, in 1986, the Lotus Group was acquired by General Motors, and a year later bought the Millbrook testing ground in Bedfordshire, for both its own use, and for letting out to other companies.

By 1990/91, work at Hethel also included the production of the Lotus Carlton, where complete Omegas/Carltons made by Opel in Germany were stripped down and rebuilt using an enlarged and considerably uprated Opel straight six engine, tuned to give 377 bhp, and a top speed of about 175 mph, making it, reputedly, the fastest production saloon in the world.

A further change in ownership took place in 1993 when General Motors sold Group Lotus to the Italian engineering company, Bugatti.  However, within two years Bugatti was forced to file for bankruptcy, with Lotus eventually moving under the majority control of the Malaysian car manufacturer, Proton.  In 1995 Team Lotus was disbanded, due to the spiralling costs of involvement in Formula One. However, the mid-90s was also the period in which Lotus reflected, once again, its original fundamental principles with  the development and production of the innovative and lightweight Lotus Elise, launched in 1995.  Still in production today, the car has been steadily updated and revised, and is now in its third series.  It has been the basis of a number of models, such as the 340R and Exige, together with the Vauxhall VX220 and Opel Speedster, both manufactured at Hethel between 2000 and 2005.

In 2011, after falling into disrepair, the test track at Hethel was refurbished and updated, and in 2012, the Malaysian conglomerate, DRB Hicom, purchased a majority stake in Lotus' parent company, Proton Holdings. 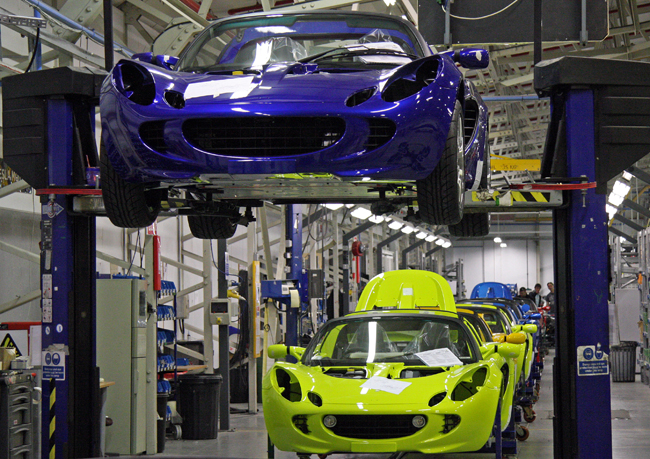 The home of sports and racing car manufacturer, Lotus.