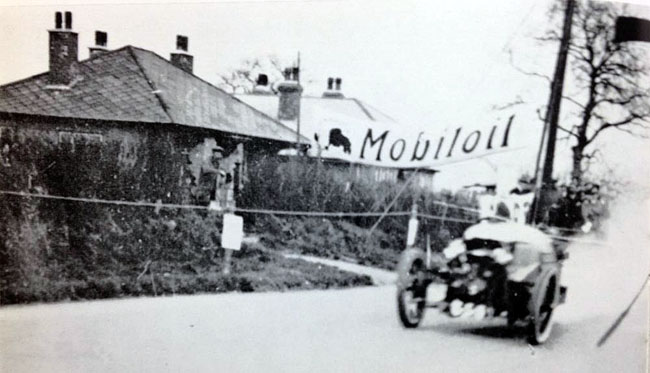 Location
Rotherwas Road (the B4399), which passes through the Rotherwas Industrial Estate on the south east side of Hereford, today known as the Straight Mile.
Also, Whitecross Road (the A438), to the north west of the city, on the main road between Hereford, Ross-on-Wye and Brecon.

Commentary
The 1923 and 1924 Hereford Speed Trials took place on the Rotherwas Road, now known as the Straight Mile, which at the time ran passed the Rotherwas Royal Ordnance Factory, established in 1916 to fill shells with high explosive and, later, mustard gas.

The fastest time of the day of the 1924 event, run over a measured half-mile, was achieved by HFS Morgan in one of his own cars.  (However, publicity material produced shortly afterwards by the Alvis Car and Engineering Company also claims a “First” at the same event!)

The 1925 Speed Trial was held on Saturday 4th April on Kings Acre Road, again over the measured half-mile.  Two days earlier, the Royal Automobile Club, the then governing body of motor sport in Britain, had cancelled all permits for speed trials on public roads following an accident a week before at the Kop hillclimb in Buckinghamshire where a competitor had lost control of his car, injuring a spectator.  The safety of the public at such events was of increasing concern to the authorities, as police and marshals were often unable to ensure that spectators moved back from the roadside.

Faced with this last-minute cancellation, the Auto-Cycle Union, organisers of the Hereford event, appealed to the Hereford Police, the Mayor and the Watch Committee for the Trial to take place, despite the ban.  To the organisers' relief, the “good sporting instincts” of the authorities prevailed and the event was run as originally planned.

The trial itself was primarily a motor-cycle and three-wheeler event, with only five cars amongst the ninety-odd entries.  The fastest time of the day, 19.0 seconds, was recorded by I P Riddoch on his 988cc Zenith motorcycle.  The fastest car was a Bugatti, driven by F Taylor, who completed the course in 25.6 seconds.