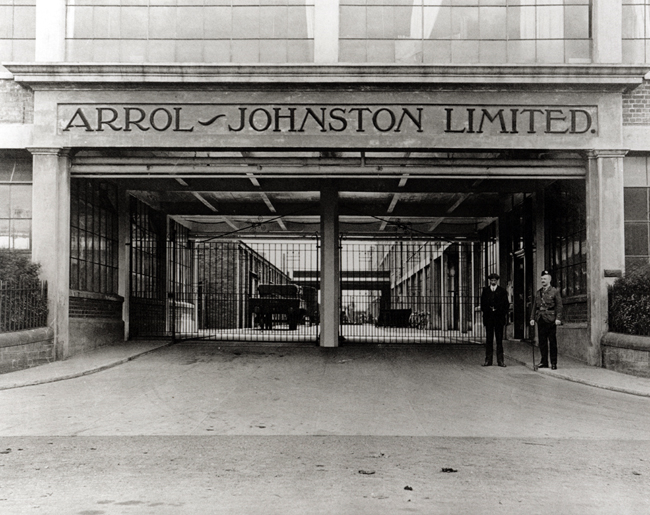 A unique British factory, and the final location of a once major British motor manufacturer.

Commentary
In 1909, Thomas Pullinger was appointed general manager for Arrol-Johnston at their factory in Paisley.  Previously working for Darracq, Sunbeam, and then Humber, he brought considerable expertise to the company.

Under his leadership production significantly increased, but further growth was hampered by the limited space in the former thread mill, where the company was based.

Thomas Pullinger’s remedy for this was the construction of a new purpose-built factory on a green field site, just outside Dumfries.  The location, it was felt, would enable the company to retain its Scottish identity, while bringing it considerably closer to England, its main market.  Moving out of Glasgow into an area without a strong engineering tradition also helped Arrol-Johnston de-unionise its workforce.  Thomas Pullinger’s experiences at the Humber factory in Coventry had left him deeply critical of the Amalgamated Society of Engineers, and he subsequently did his best to exclude its members from his workforce.

The new works at Heathhall were built between 1912 and 1913, and provided Pullinger with an opportunity to follow some of the modern production techniques that he had observed on an earlier visit to Detroit. 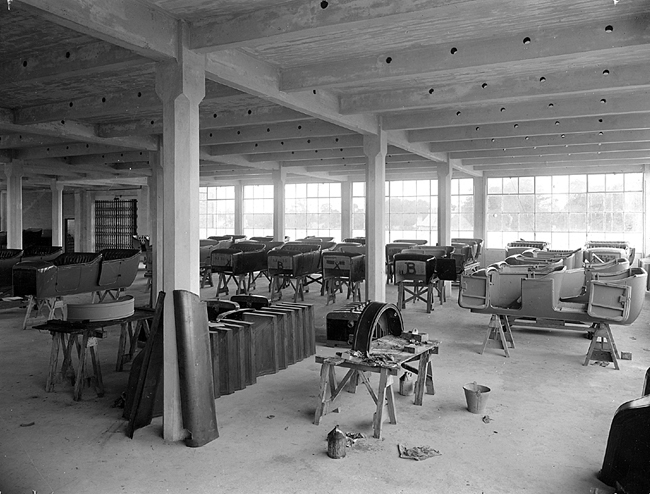 The three-storey “daylight” factory was built around a steel reinforced concrete frame on an E-shaped plan, similar to those designed by Albert Kahn for Henry Ford and other US car manufacturers.  It is the first known example of a ferro-concrete car factory to be built in Britain.  External walls were made almost entirely of glass, set in metal frames above low brick panels.  The design provided much more interior light than usual, although the benefit was negated in some parts of the building by the forest of overhead belts and production machinery.

Another indication of modernity was the increased attention paid to health and safety, and fire precautions, in particular - especially relevant to Arrol-Johnston given their past experiences.

The Heathhall factory was also designed to provide a more employee-friendly environment.  Artesian wells supplied drinking fountains located throughout the factory; there was a factory canteen, and a health centre.  A recreation area on the fourth floor included a kitchen, dining room, library, and games room. A tennis court was set up on the factory roof. 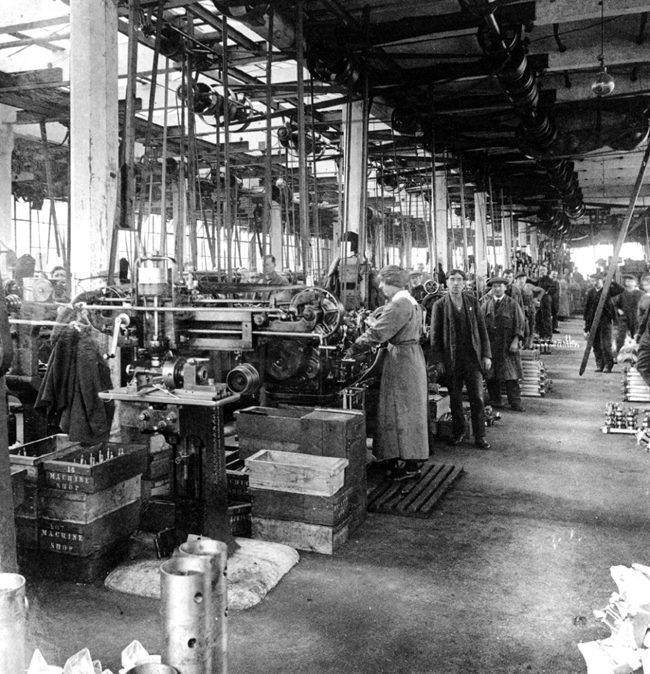 Arrol-Johnston moved into the Heathhall factory in 1913 but, with the onset of war less than a year later, car production was replaced by aircraft engine manufacture.   In 1916, at the request of the Ministry of Munitions, the factory was extended, to enable whole aircraft to be assembled.  A year later, a second factory was built at Tongland, about 25 miles to the south-west.  This was again initially used for aero-engine production, but later became the home of the Galloway car.

When car production resumed at Heathhall at the end of the war, Arrol-Johnston was one of the first manufacturers to launch a new model, symbolically named ‘Victory’.  The car was designed by George W A Brown, who had previously worked for Clement-Talbot, and was responsible for designing the first car, driven by Percy Lambert, to cover more than 100 miles in an hour. 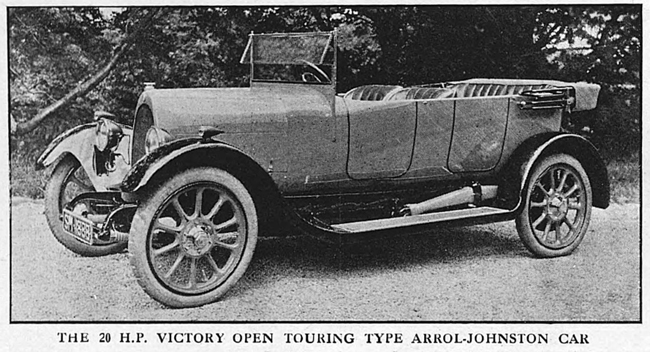 Announced early in 1919, the 15.9 h.p Victory received considerable praise from the Press.  With a four cylinder, 2.6-litre, overhead camshaft engine, four-speed gearbox, automatic lubrication, and built in “aircraft specification” material, the car was judged to be destined for success.  Its positive credentials were further underlined when the Prince of Wales (later, King Edward VIII) reportedly took delivery of the first car in August 1919.

Today the Victory is largely remembered for being quietly withdrawn, with only a handful of cars being sold, after a very public display of unreliability when the Prince’s car reportedly broke down in Yeovil in Somerset on a royal West Country tour.

However, it has been difficult to find corroboration of this from newspapers of the time.  In June 1919, the Prince apparently undertook a tour of the West Country, but this included only Devon and Cornwall, and not Somerset.  He did drive a car during this time, but photographs suggest that it is more likely to have been a Rolls-Royce or a Crossley than an Arrol-Johnston.  If the Victory was not delivered until August 1919, there would have been little time over the remainder of the year for the Prince to use it.  On the 4th August, he left England on a tour of Canada and the United States, not returning until the beginning of December. By March the following year, he was off on his travels again – this time to Australia, New Zealand and the Pacific and Atlantic colonies.  An article appearing more than 20 years later in The Motor reported that a multitude of problems with the car had occurred as it was being driven from London down to the West Country by the Prince's chauffeur, and that the car was consequently withdrawn from service. 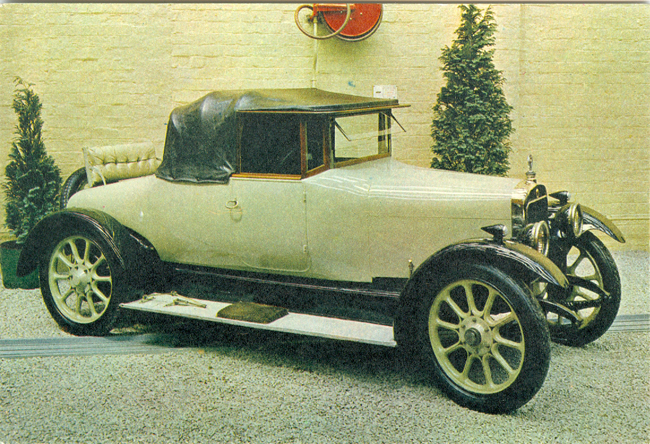 This aside, by the time of 1919 Motor Show, held in November at Olympia, Arrol-Johnston had re-introduced the pre-War 15.9 model, which continued to sell, despite its ten-year-old design.  In the meantime, Thomas Pullinger, and his daughter Dorothée had embarked on a second motoring venture at the company’s other factory in nearby Tongland.  Dorothée, a highly accomplished engineer and manager, persuaded her father to use the former aircraft factory for the production of a smaller, simpler car, which became known as the Galloway, and was launched in October 1920.

About 400 vehicles were made at the Tongland site before production was moved to Heathhall, which was operating at well below capacity. 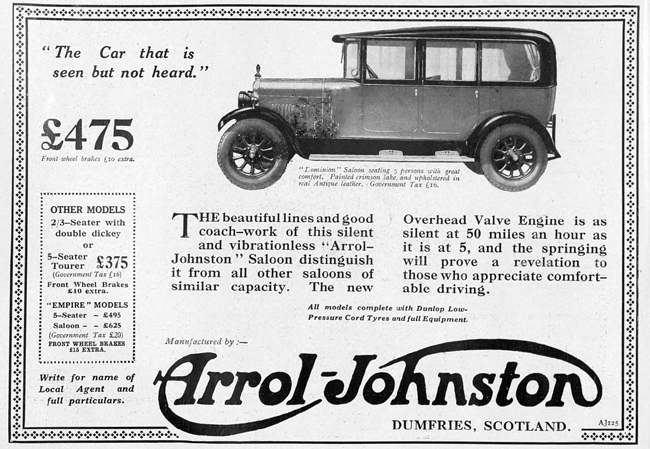 In 1924, Arrol-Johnston released the Empire model, built, as its name suggests, for sale in the British colonies.  Over the next three years developments were generally limited to improvements to existing models, and in March 1927, it was announced that the company had acquired Aster Engineering of Wembley, in Middlesex.

Aster was originally a French engine manufacturer, whose products had been made under licence in England since 1899, and only latterly had they begun to produce their own large, luxury saloons. 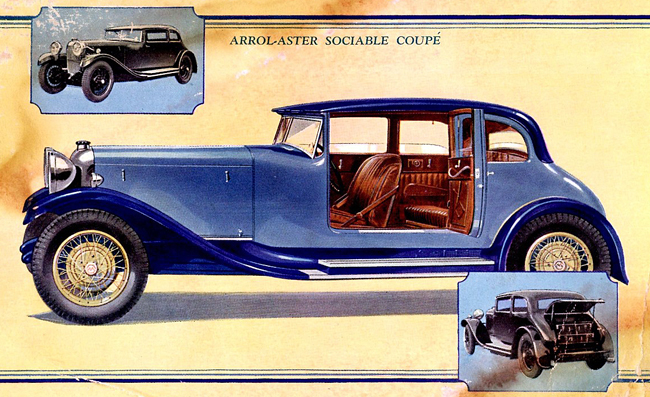 Arrol-Aster, as it the new company became known, continued to receive favourable treatment in the press.  One interesting innovation was the fitting of the Millam free-wheel and sprag onto some the models, providing a free-wheel facility and allowing the car to be started on a hill without the use of the footbrake.

However, the new company was slow to rationalise its model range; in 1928 six very different models were offered - from the small Galloway to a 70 h.p Aster.  Three of the range were axed in 1929, but this was not enough to prevent Arrol-Aster going into administration in that year. 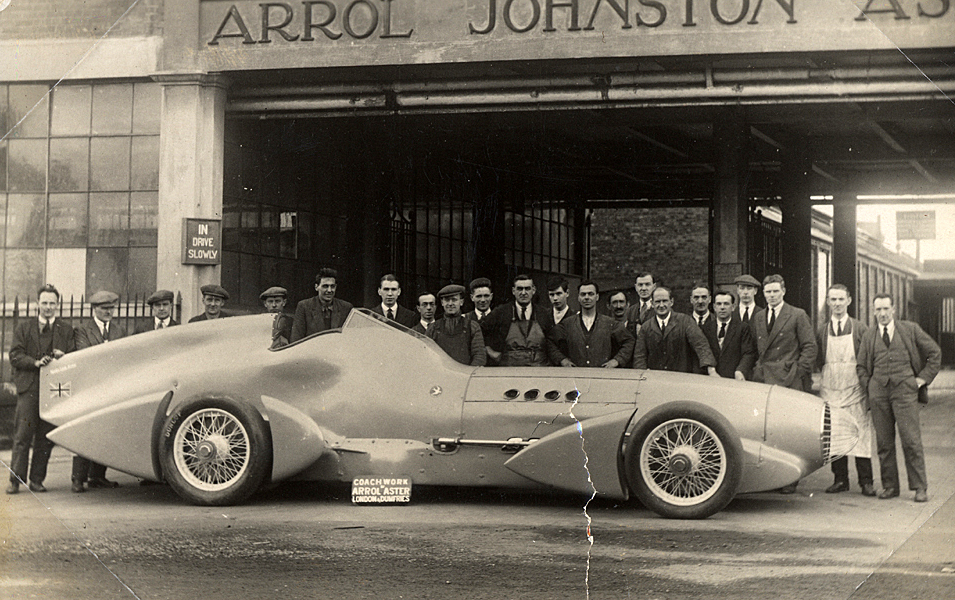 In these dying days, the company undertook one more prestigious project, winning the contract to re-body Capt. Malcom Campbell’s Bluebird in preparation for his attempt on the World Land Speed Record at Verneuk Pan in South Africa in May 1929.  Dogged with difficulties (the weather, and the surface of the dried-up lake in particular) Malcolm Campbell was unable break the record of 231.466 mph, set by Sir Henry Seagrave at Daytona a few weeks earlier.

The Arrol-Aster company was dissolved in 1931, but the factory continued to be used for various types of light engineering.  In September 1936, it was acquired by High-Powered Aeronautical Engines Ltd, who planned to make aircraft and marine engines from Italian patents.  There were high expectations, with plans to employ up to 2,000 people and to build an aerodrome close to the factory.

However, just over a year later it was announced that Heathhall would again close.  Despite the importance of the re-armament programme to Britain, the UK government took the view it could not be associated with the project in view of the Italian invasion of the Kingdom of Ethiopia, known then as the Abyssinian War.

In 1938, the factory, one of the largest in Scotland, was offered for sale once more, but no bids were received.  In 1939, it was taken over by the Air Ministry and used as a store until 1946.  The next occupant was the North British Rubber Co. Ltd, who used Heathhall to extend its range of products to include tyres, golf balls and the green Hunter Wellington boot.  In 1986, Heathhall passed into the hands of UniRoyal, then the Gates Rubber Company, and finally, to Interfloor, makers of carpet underlay. 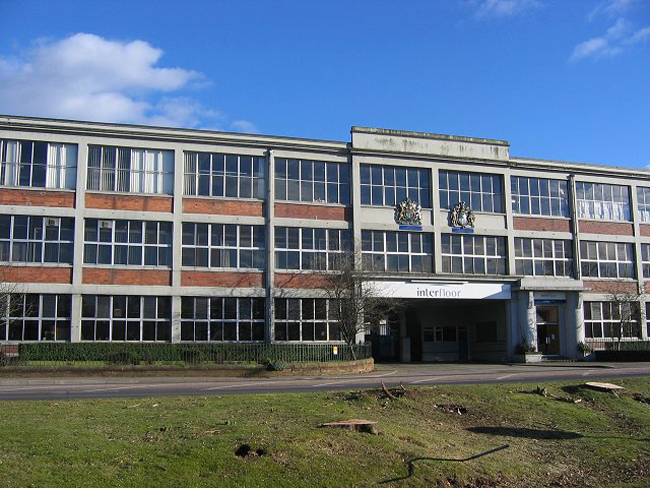 The factory closed for the last time in 2013 and in 2021, despite its status as a listed building, was in some state of decay.

A unique British factory, and the final location of a once major British motor manufacturer.