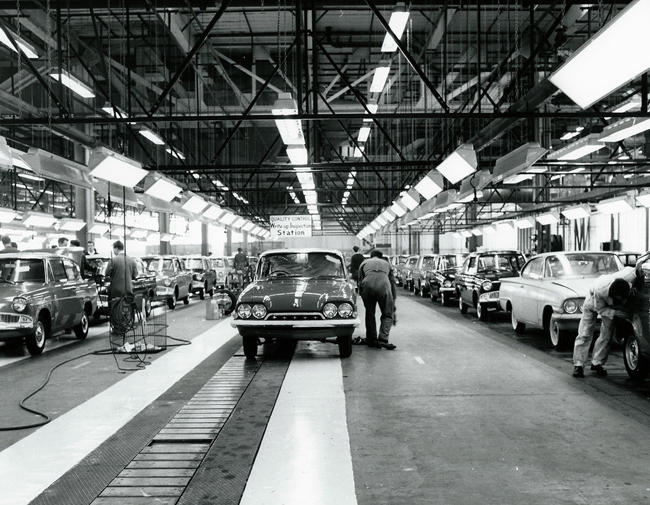 Commentary
In February 1960, Sir Patrick Hennessy, then Chairman of Ford UK, announced that negotiations had begun with Liverpool Corporation for the purchase of a 346-acre site at Halewood, on the south-eastern edge of Liverpool.

Ford was anxious to increase its manufacturing capacity in Britain, but the government policy of the day dictated that development grants and assistance could only be given to companies setting up business in areas of high unemployment.

Merseyside was one such area, but there was little local experience of car manufacturing.  Ford recognised the need to train recruits in production techniques, and leased an aircraft hangar at Liverpool Airport, set up as a miniature production line.

Work started on clearing and levelling the site in February 1960; it was hoped that limited production of the Anglia could begin in 1962, but wet weather delayed the project and production did not begin until October 1963.

Initially, the plant consisted of a press shop and an assembly area, with engines and gearboxes being delivered overnight from Dagenham on specially built “Blue Trains”, which would return south with stampings from the press shop.

By 1965, a transmission plant had been built at Halewood, and the labour force increased from 3,000 to 9,500 employees.  The model range produced at the factory now consisted of the Anglia, Corsair, Cortina, and the Consul Classic and Capri.

Anglia production ended in 1967.  It was followed by the Escort which, with the Orion, continued to be made at Halewood until July 2000.
When Ford took the decision to manufacture the Escort’s replacement, the Focus, not at Halewood but at their plants in Saarlouis in Germany and Valencia in Spain, there were fears that Halewood might close.

However, salvation came as a result of Ford’s takeover of Jaguar in 1989, and their later acquisition of Land Rover in 2000.  Under Ford, Jaguar was able to expand its model range to introduce the X-type, more of a family-sized car than Jaguar had produced hitherto, based in part, on the Ford Mondeo.  Production began at Halewood in 2001; the first Jaguar to be produced away from the company’s traditional Midlands base.

In 2007 that Ford announced its plans to sell Jaguar and Land Rover, with the Indian car maker, Tata, emerging as the successful bidder.  Today the original Halewood site is operated by two companies: Jaguar Land Rover and Getrag Ford – a joint venture in the production of transmission, first established in 2001.