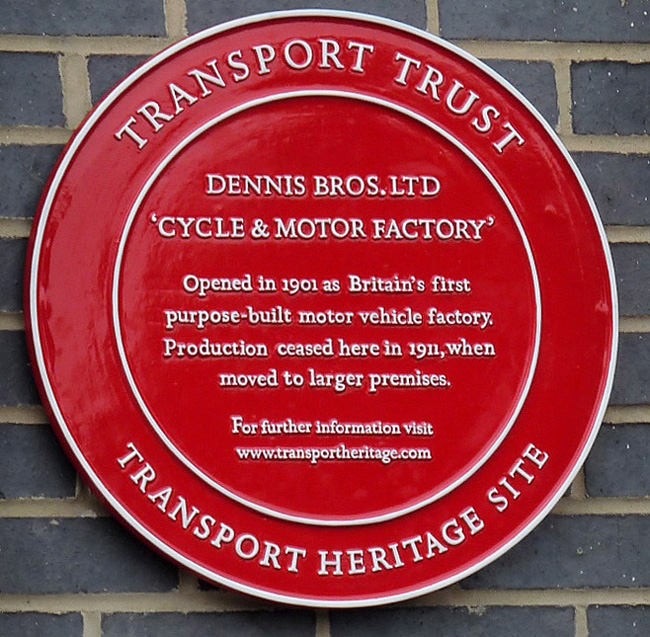 An early motor manufacturer, whose premises in Guildford are now probably the earliest surviving purpose-built motor factory in Britain.

Commentary
Young entrepreneur, John Dennis, began making bicycles in 1895 and selling them from his shop, the Universal Athletic Store, on Guildford High Street. Joined by his business-minded brother Raymond, they soon moved onto making motor tricycles and quadricycles, quickly outgrowing a second premises in the old barracks in nearby Onslow Street. 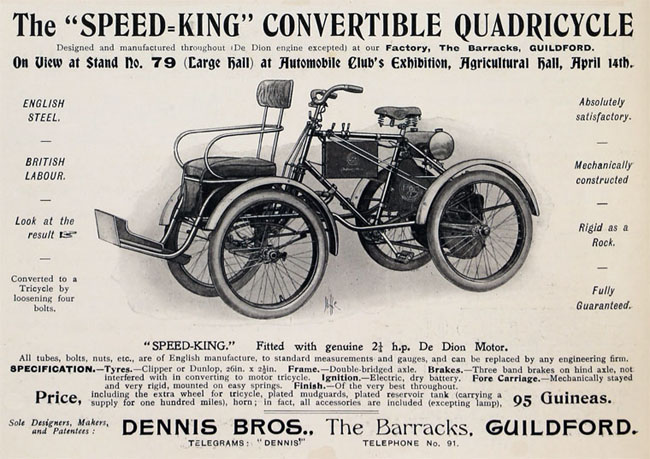 In need of a larger building, the brothers commissioned local architect John Lake to design an imposing, purpose-built factory near Guildford railway station, on the corner of Bridge Street and Onslow Street. In 1901, with sales soaring, Dennis Bros Ltd moved into the three-storey building before it was complete.

Initially designed for the manufacture of both cycles and motor cars, the new factory was well lit by deep, ironed-framed windows.  However, the multi-storey layout proved to be a folly. 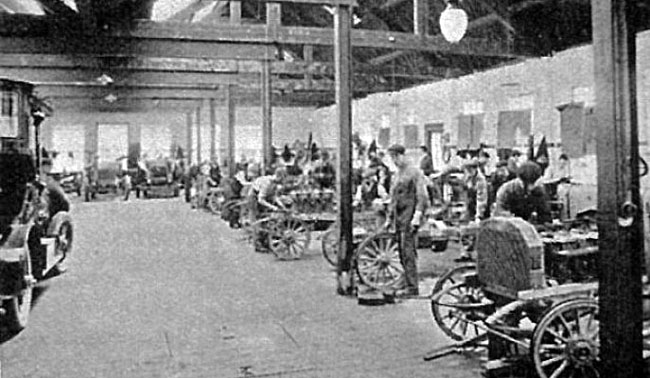 Car production began in the machining, polishing and plating workshops on the first floor, with all the stores being brought up from the basement. The floor above housed the furnaces, painters’ shop, upholsterers, and enamelling department. Lethally steep stairs connected the three floors. A large lift moved assembled vehicles down to the showroom on the ground floor.

Despite the inefficiencies of the building, the company grew to enjoy enormous success. The brothers were quick to innovate and experiment, most significantly developing a worm-drive transmission, which went on to replace the chain-drive used in most cars.

They also understood the power of publicity, using details of John Dennis’ prosecution for ‘driving furiously up Guildford High Street’ at 16 mph as proof of the speed their vehicles could achieve! Other eye-catching events, and high profile customers, such as the Brazilian Viscounts and Russian Dukes, appealed to the growing motoring population. 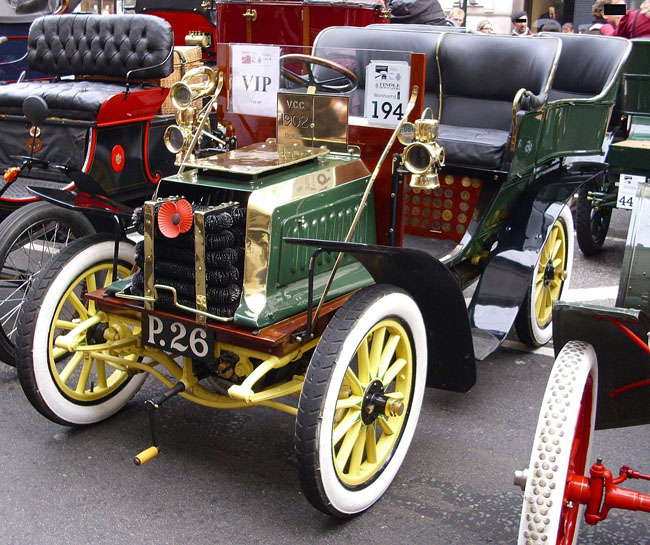 In 1901 a Dennis car won the Tilburstow Hill trials near Caterham, and the following year a car especially built for Lord Pirbright, who lived locally, gained a “non-stop certificate” in the 1902 Automobile Club Tour from London to Oxford. In 1906, a Dennis was the first recipient of the Dewar Cup, awarded for its performance in an Automobile Club trial, covering a distance of 4,000 miles.

Dennis Bros expanded rapidly, receiving almost £30,000 worth of orders at the 1903 Crystal Palace Motor Show alone. Eager to capitalise on other markets, they produced their first commercial vehicle in the same year – a box van bought by Harrods of London. This signalled a radical change; within two years commercial vehicle production had overtaken cars. 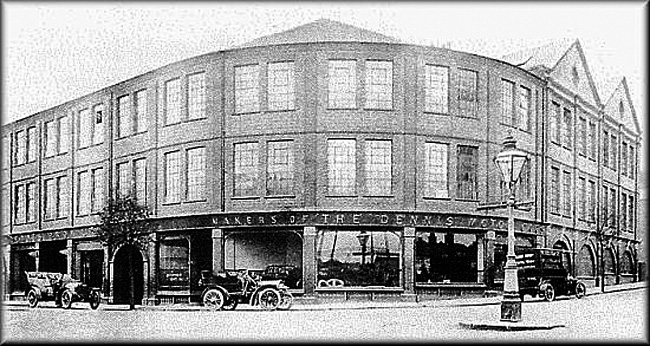 In 1905, struggling to meet demand and having already extended the Bridge Street factory, a new facility was opened in Woodbridge Hill, about a mile-and-a-half to the north. The site grew in size, and importance, as Dennis buses, lorries and ambulances rolled off its production line. However, the Bridge Street factory continued to play an important role in the company’s success, and it was here where the first Dennis fire engine was produced in 1908.

The company offices remained at Bridge Street until the building was sold to the Rodboro’ Boot and Shoe Company in 1919, giving rise to the name by which it is known today – the Rodboro’ Buildings.

For the next 80 years the building housed an eclectic mix of businesses including the production of hand barrows, knitwear, a barbers, pet shop, and numerous nightclubs. During the Second World War it was used by the Red Cross to make up parcels for prisoners of war, and then for manufacturing munitions.

Derelict and boarded up by the 1980s, it was finally restored in 2008 to house a pub and restaurant, and given the protection of a Grade 2 listing.

Dennis continued to produce commercial’s vehicles at Woodbridge Hill until 1990. Today, its successor, Alexander Dennis Ltd, is one of the world’s leading bus and coach builders.

An early motor manufacturer, whose premises in Guildford are now probably the earliest surviving purpose-built motor factory in Britain.