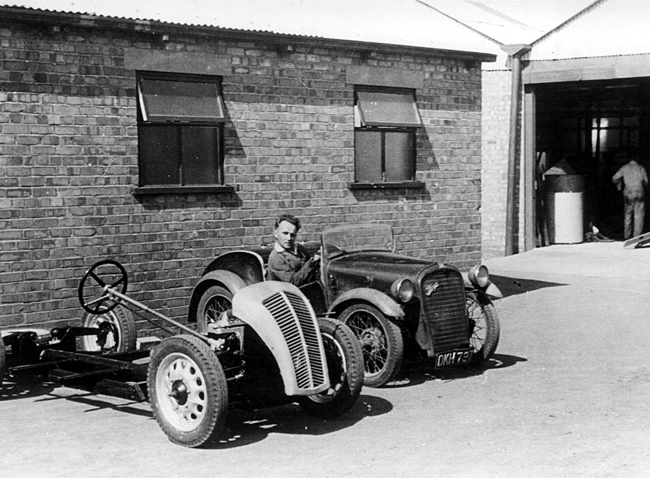 A short-lived, small, manufacturer, in some ways ahead of its time.

Commentary
At the beginning of April 1937, Albert Allport collected a brand new Lloyd 350 from Lloyd Cars in Grimsby, and drove it 216 miles back to the Wheat Sheaf Garage in the village of Brigham, near Cockermouth, where he was proprietor.  The journey clearly went well, for a few days later he was moved to write to Lloyd’s to express his satisfaction with the new car, and to say how much he had enjoyed the trouble-free drive home.  Averaging 40 miles to the gallon, he explained that he had needed to drop down to second gear on only two occasions – no mean feat, given the terrain that he must have covered. 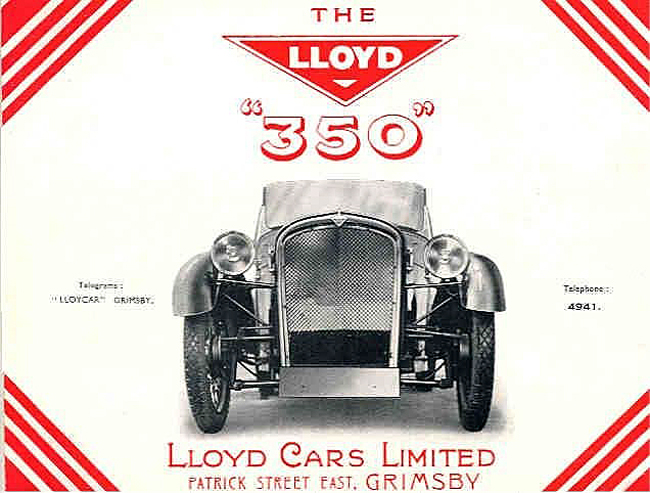 The Lloyd 350 had a tubular backbone chassis with independent suspension on all four wheels, and was fitted with a rear-mounted, single-cylinder, water-cooled Villiers 347cc two-stroke motorcycle engine, driving the nearside rear wheel through a three-speed gearbox.

It was a tiny car – just 9ft 3in in length, with a two-seater open, or three-seater closed, body.  Despite its diminutive proportions, the placement of the engine at the rear of the car gave ample legroom for driver and passenger, together with space for the spare wheel and battery.

The 350 was the brainchild of Roland Lloyd, who had for many years worked on cars at his father’s garage, Fred Lloyd (Motors) Ltd., on Nuns’ Corner in Grimsby. 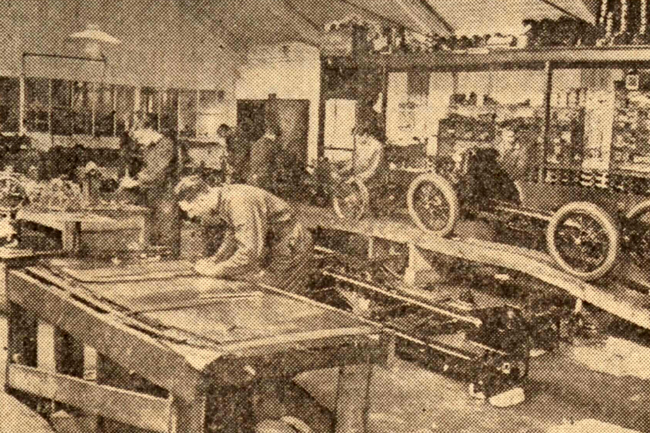 In 1935, Roland Lloyd established Lloyd Cars in premises at the eastern end of Patrick Street.  At an initial price of 85 guineas (later reduced to £75 when the Villiers engine cylinders were replaced with those of Lloyd’s own design), the car was built for minimal motoring.  Advertisements offered “Car comfort at motor cycling cost!”, with a claimed top speed of 55mph, and fuel economy in the region of 50mpg.

Lloyd cars were seldom mentioned in the national motoring press; publicity was generally confined to local newspapers.  In 1939, the Grimsby Daily Telegraph enthusiastically reported Lloyd’s export sales to “many distant parts of the world”.    It also reported sales of a fleet of the Grimsby-made two-seaters” to the Gas Light and Coke Co., for use, presumably, as service vehicles. 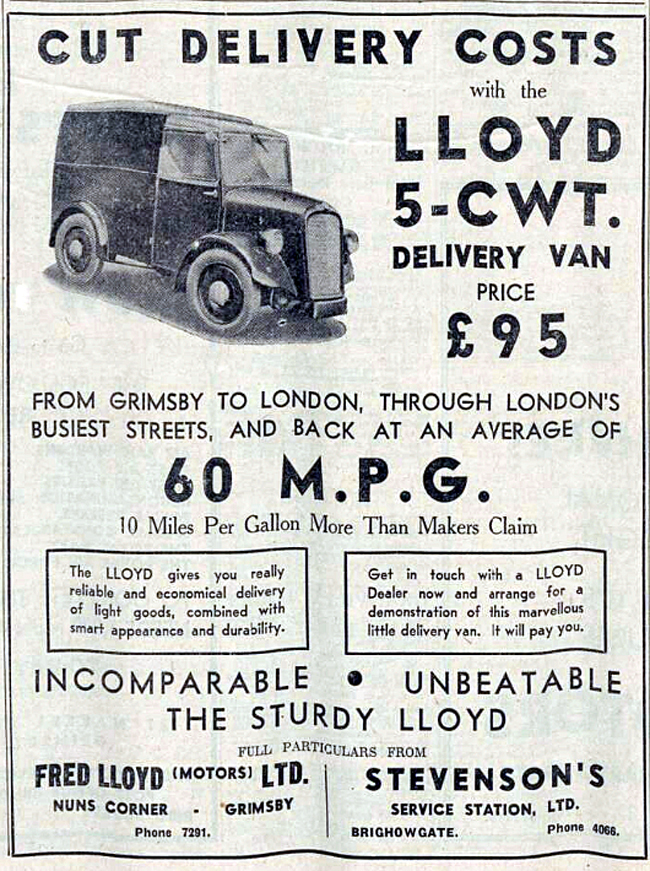 In January 1939, Lloyds also announced the development of a small 5cwt delivery van, at a price of £95 in grey primer, or £97 painted blue or green.  Although, in some ways, mechanically similar to the car, the vans were front-engined and front-wheel drive.  Advertisements claimed a fuel consumption of 60mpg … “From Grimsby to London, through London’s busiest streets, and back”.

With the onset of war, very few vans were produced (one estimate suggests that only five were made), and for the next six years, Lloyds focussed instead on military production, including precision war work for Rolls-Royce.

The machinery and expertise gained during the war years almost certainly shaped the way in which Lloyd’s decided to put their next car into production.  Economy, once again, was a major priority, but this time, a key characteristic of the Lloyd 650, as the model was called, was that almost all its components, including the chassis, body and engine, were made by Lloyd’s themselves – even the wheels and brakes. 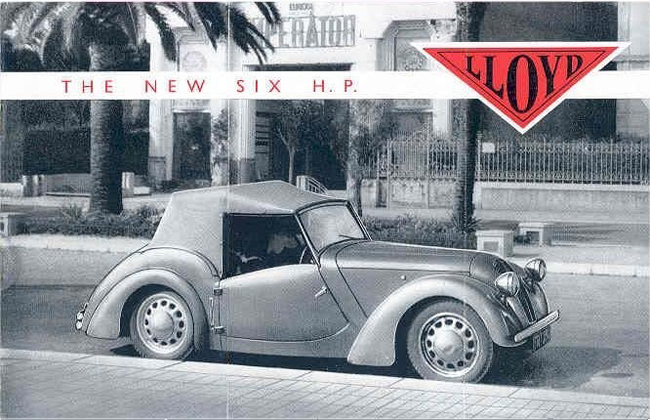 Exactly three feet longer than its predecessor, the 650 was still a small 2/4-seater roadster, with an aluminium-panelled body mounted on a tubular chassis.  The car is said to have been almost entirely designed in-house, with a specification that reads like a glance into the future: a 654cc, all aluminium, two-cylinder, fuel pump-injected, two-stroke engine; front-wheel drive, independent suspension via coil springs and wishbones, rack and pinion steering, and a twin-clutch gearbox; features which, by and large, would not be in widespread use for many years to come.

With all but the steering wheel, tyres, lighting and instruments made in-house, it was, for such a relatively small operation, extremely difficult for Lloyd’s to match the production standards (and reliability) of major manufacturers.  Although Motor Sport reported that that “the little car buzzed along very smoothly and willingly”, holding a maximum speed of just over 50mph, it is clear that it was not without faults; no doubt a cause of some frustration to those owners lucky enough to be able to buy a new at such straightened times. 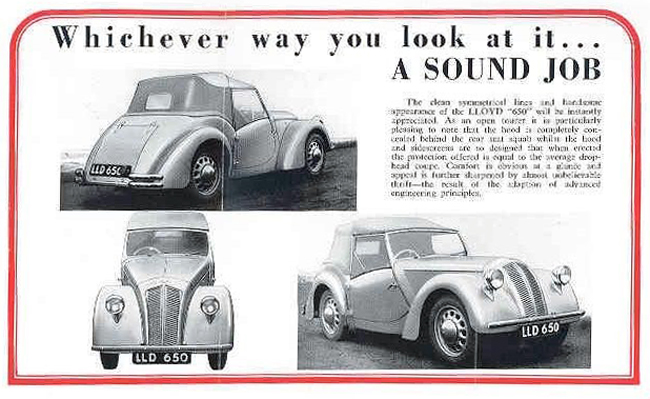 Announced in 1947, the Lloyd 650 went on sale in 1948, at a price of £480, with hopes of building up to 50 cars a week.  However, with so much design and development taking place in-house, production problems were perhaps inevitable, and output was usually limited to less than five cars per week.

A further difficulty facing Lloyd’s was that the products of many of its competitors could be bought for considerably less.  The Austin A40 Devon, launched in 1947, sold for £403 and the new 1948 Ford Anglia could be bought for as little £310. (Graham Robson, Cars in the UK.)

In February 1950, with great optimism, Roland Lloyd showed distributors and sales staff the prototype of a new small van that the company was intending to produce.  However, just three months later, the company announced that it was suspending output, and laying off its 200 employees.  The reason for the turnabout was the Government’s introduction of a 33⅓ per cent purchase tax rate on the wholesale price of vans, rendering Lloyd’s plans for its new model completely unviable. 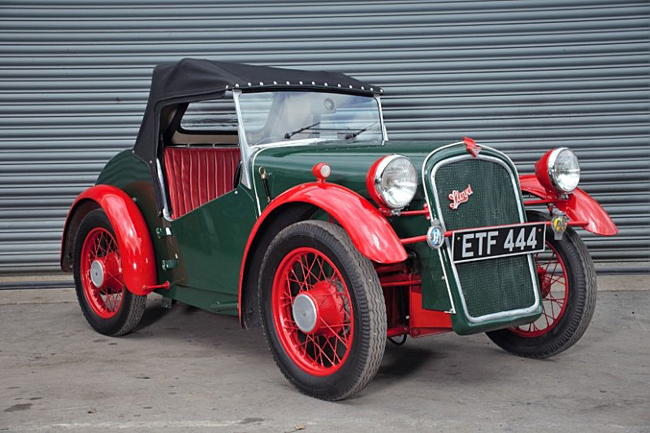 Apparently at the insistence of its creditors, the company faced significant re-organisation.  Although some staff were re-employed, car production was wound down, with the business then concentrating on general engineering, which ultimately included producing components for companies such as Rolls-Royce, Aston Martin and Lotus.

Roland Lloyd died in 1965, but the company continued until 1986 when it was eventually wound up.  It is estimated that total production figures for the 350 and 650 were around 150 and 400 vehicles respectively.  Thirteen Lloyd cars are thought to remain: three of the 350 model, and ten 650s.

With thanks to Gordon Brooks and Berrybrook Steam & Classics for their help in the preparation of this article. 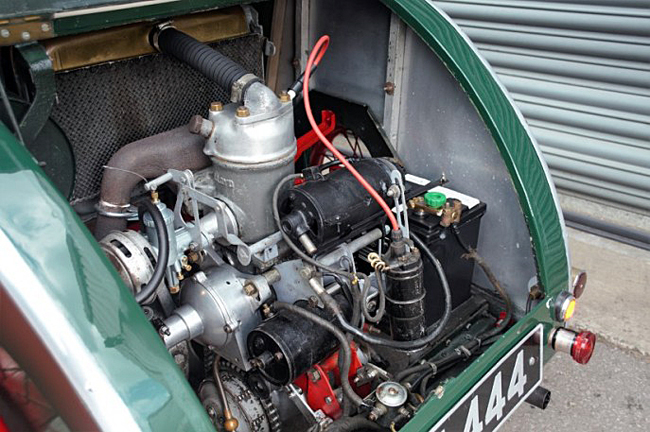 A short-lived, small manufacturer which was, in some ways, ahead of its time.