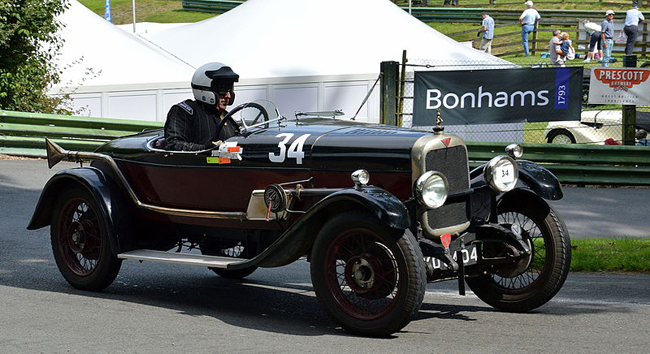 One of Britain’s premier hillclimb locations.

Commentary
In 1937, it was announced that, in their search for a suitable hillclimb site, the Bugatti Owners' Club had purchased the Prescott House Estate close to Cleeve Hill, and five miles from Cheltenham.  The suggestion of the Prescott Estate as a possible venue originally came from engineer, author and campaigner, Tom (LTC) Rolt.

The course initially followed an 880-yard route, with an average gradient of 1 in 20, along the drive up to Prescott House. It was later extended to 1127 yards in 1960, with the addition of a link road and corner.

In April 1938, a rally for Bugatti Owners’ Club members only was held to enable members to see and try the new hill.

A month later, on Sunday 15th May 1938, the course was fully opened, with an entry of 53 cars and between two and three thousand spectators in attendance.  Cars ranged widely in size and age, from the sub 1-litre class to a 12-litre 1908 Itala.  The first course record of 50.7 secs was set in a 2.3-litre Bugatti, driven by Arthur Sumner.  The course closed in September 1939 with the onset of war, but was re-surfaced and then re-opened for competition in May 1946.

The programme of meetings still continues today, with most events taking place between April and October.

The Bugatti Trust museum and archive are also located at Prescott.

One of Britain’s premier hillclimb locations.