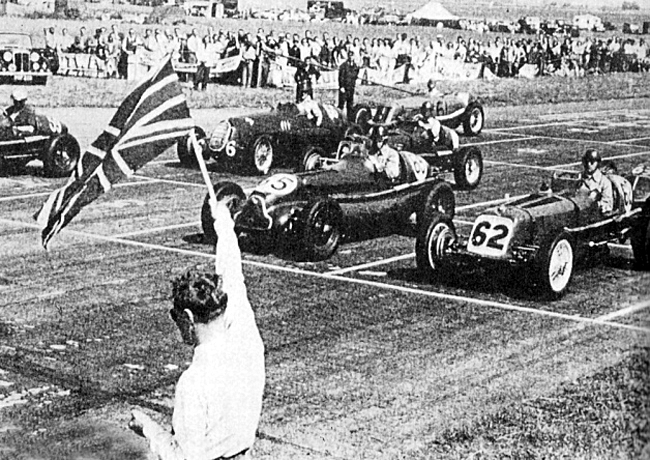 An airfield circuit that attracted prominent drivers and large crowds in the early 1950s.

Commentary
RAF Gamston was opened in 1942, and initially used as a base for twin-engined Oxford training aircraft.  In 1943 it was transferred to Bomber Command, for use with the Vickers Wellington and Miles Martinet; the latter being a specially adapted aircraft designed to tow a target for firing practice.

Towards the end of the War, Gamston became a base for members of the Royal Australian Air Force, awaiting repatriation; but by the end of 1945, the station had closed.

For a period during 1950 and 1951, part of the airfield was used for motor racing, with the track being shared between the Nottinghamshire Sports Car Club and the Sheffield Hallamshire Motor Club.  The first meeting was held in April 1950 on a 1.3-mile triangular course.  Later events, on an extended two-mile track, attracted Grand Prix cars and top drivers; racewinners at Gamston included Peter Collins (Allard Cadillac and Allard J2), Colin Chapman (Lotus-Austin), and father and son, Leslie and Mike Hawthorn (Riley Ulster Imp and Riley TT Sprite) - watched on Whit Monday 1951 by a huge crowd of 40,000.

The airfield was reopened by the RAF in 1953 as a satellite to the flying school at RAF Worksop, with Gloster Meteor and de Havilland Vampire jets, and closed for a second time in 1957.  Today it is a small commercial airport.

An airfield circuit that attracted prominent drivers and large crowds in the early 1950s.