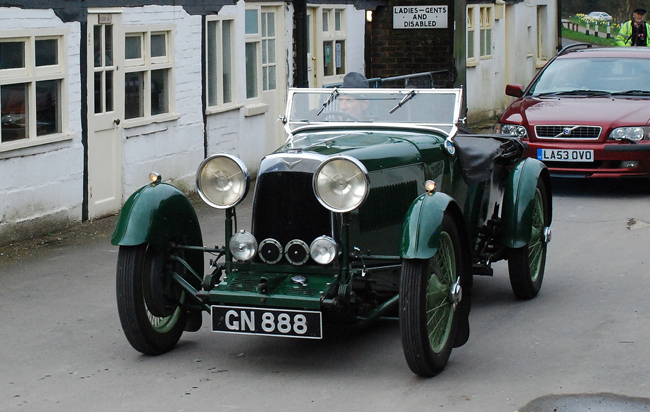 The factories where the foundations of Aston Martin were laid.

The new owners were R S Renwick, A C “Bert” Bertelli, and the Charnwoods.  As well as providing financial support, Bertelli also brought considerable technical expertise; and, with R S Renwick, decided to develop a new car that became the prototype for the Bertelli Astons, from 1927 onwards.

It is these cars that seem to have established Aston Martin’s reputation of producing beautiful, high-quality, high performance cars.  As Gregor Grant said in his book on British Sports Cars, “the two-four seater international … with its low racy lines and excellent performance put the Bertelli Aston Martins on the map.”

The firm continued to focus predominately on the production of cars for their own racing team.  In 1931 only 30 cars were built for private sale.  However the prestige of the company’s Le Mans entries and further injections of capital just managed to keep the business afloat during the years of the Depression.

In 1936 Bertelli left Aston Martin and was replaced as chief designer by Claude Hill; and it was he who, through the experimental Atom, laid the foundations for the next generation of post-War Aston Martins.

Between 1939 and 1945, Aston Martin produced aircraft components, but funding problems for the company returned after hostilities had ceased.  Owner, Gordon Sutherland placed a discreet notice in the Times, advertising an unnamed sports car manufacturer for sale.  The advertisement was answered by David Brown, managing director of a major industrial concern, whose products included tractors and machine tools.

The Victoria Road factory had suffered substantial bomb damage in the War, and production was transferred to the nearby Hanworth Park airfield site after David Brown’s take over in 1947.

During the 1950s, car production at Hanworth was wound down as a new site was developed at Newport Pagnell, in Buckinghamshire.

The factories where the foundations of Aston Martin were laid.