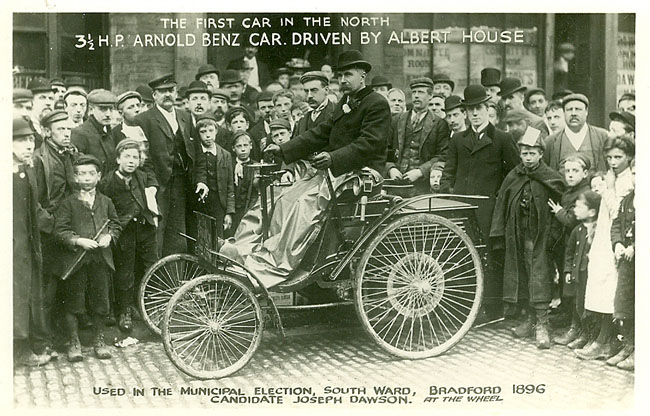 Commentary
On the afternoon of Saturday 15th August 1896, a cricket match was held between Branbridges Mills and “Mr Webb’s Team” at the Rose and Crown Ground on the outskirts of East Peckham, in Kent.  The team from Branbridges were all employees of Wm Arnold & Sons, a long-established agricultural and engineering business; those playing for Mr Webb worked for his local firm of builders. 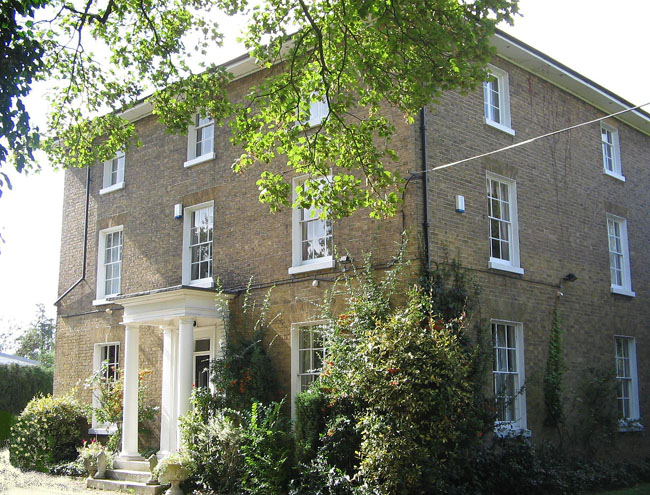 The result of the match was a runaway victory for Branbridges (by an innings and 30 runs); but this was not the main cause for celebration.  The match, and the “knife and fork tea” that followed, were held to mark the passing of the Locomotives on Highways Act to which Queen Victoria had given her assent the previous day.

Prior to this, the law in Britain imposed a speed limit on self-propelled road vehicles of two miles per hour in towns, and four miles per hour in the country, and required the vehicle to be accompanied by three people, one of whom walked ahead waving a red flag. 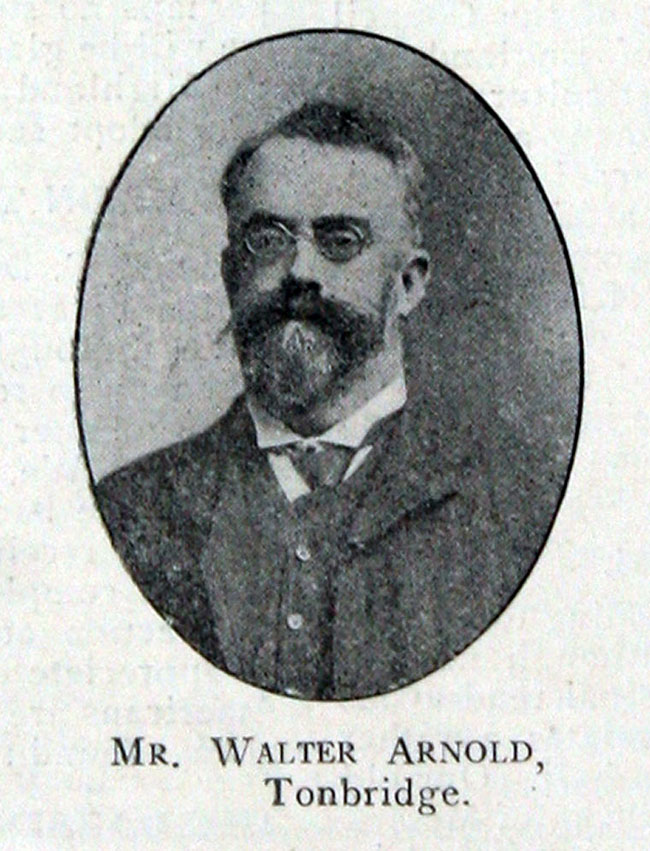 The Branbridges captain, Walter Arnold (William’s son), was an early and enthusiastic proponent of the automobile and, with David Salomons who lived nearby in Tunbridge Wells, a leading voice in the call for the removal of legal restrictions on traction engines and motor carriages.

Earlier in the year, Walter Arnold had appeared at Tonbridge Police Court charged with four motoring offences, one of which included “driving a locomotive through Paddock Wood at a speed greater than two miles per hour”.  Although there was general agreement that Arnold was travelling at around eight miles per hour when apprehended, he nevertheless denied guilt; his counsel arguing that the vehicle he was driving was a motor carriage, and not a locomotive.

The magistrates’ bench, however, disagreed, imposing fines totally £4.7s, including costs, or seven days' imprisonment, for each charge.  This was probably the first recorded speeding offence in Britain, although interestingly George Johnston had been found guilty in a Glasgow court of driving a horseless carriage just the day before “at an hour when locomotives are not allowed there”. 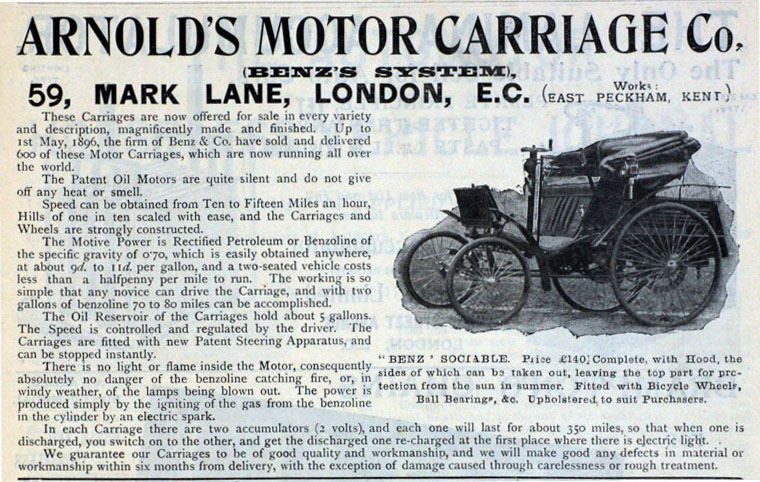 The make of car that Arnold was driving in this case was not reported, but it was almost certainly a Benz Velo.  The year before, it is believed that he had imported a 1½ h.p model, and had been so impressed with the new motor car that he set up, with his business partner Henry Hewetson, the Arnold Motor Carriage Company, specifically created to import Benz cars from Germany.  The business was registered at 59 Mark Lane in the City of London. 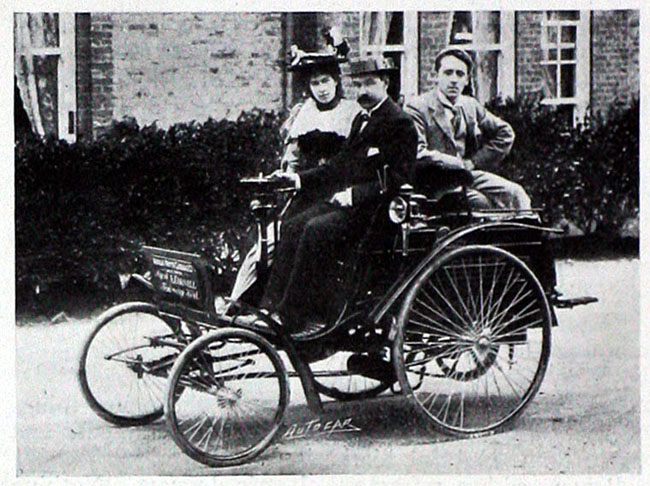 In a matter of months, Arnold and Hewetson were using the Benz as the basis for their own car of which they ultimately produced twelve examples between 1896 and 1898.  The engine of the Arnold-Benz had a slightly greater bore and stroke than the model on which it was based, together with some modifications to the transmission and throttle and an extra brass fuel tank, placed at the front of the car.

Six vehicles supplied by Arnold’s took part in the Emancipation Run, from London to Brighton, in November 1896.  These comprised four “Sociables” a “Victoria”, and an Arnold van, supplied to Lever Bros, manufacturers of Sunlight Soap.

On the first leg of the journey from East Peckham to the start in London, the van had a problem with its brake at Sevenoaks and was delayed for a couple of hours. By the time the motor carriages reached Bromley (about ten miles from London), “the rains were coming down in torrents”, and the drivers decided to stay there for the night. 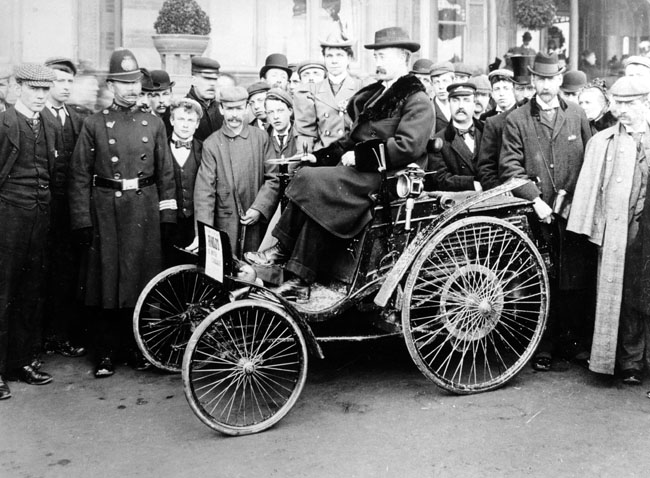 After an early start the following morning, they were hoping to reach the Hotel Metropole on Whitehall Place well before 10.30am. However the thousands of people who had gathered to watch the event prevented the cars from reaching the start on time.  The six Arnold motor carriages eventually left London at about 12.30pm.  By the time they had passed through Croydon, the rain had returned, and only two of the cars pushed on to Brighton.  The other four waited until the following day to complete their journey.

Arnold production seems to have ended during the late summer of 1898, and the partnership between Walter Arnold and Henry Hewetson dissolved in January 1899.  However, the latter continued as an agent for Benz; initially trading as the Hewetson Motor Car Co and then, shortly afterwards, simply as Hewetson’s Ltd, of 7 Dean Street, London W1 (now a listed building). 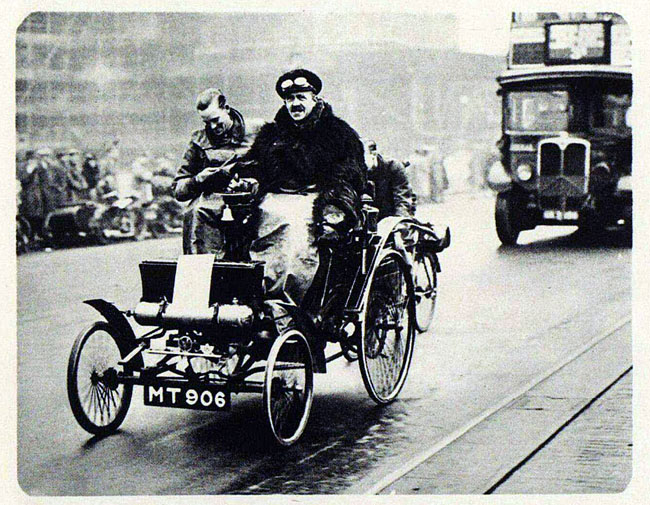 However, this is not entirely the end of the story.  In 1927, two British newspapers, the Daily Sketch and Sunday Graphic arranged a re-enactment of the 1896 Emancipation Run, gathering together 51 veteran cars; an event that continues today as the London to Brighton Veteran Car Run.

One person who was anxious to find a veteran car in which to participate was, munitions expert, Capt. Edward de W S Colver, who managed to track down the first Arnold ever made, although this wasn’t obvious to him at the time.

In 1896, the car, in its prototype form, had been taken to Ireland for testing by Henry Hewetson where, reportedly, there was less chance of prosecution from the police.  It was then sold to a Mr Dowsing from Ealing in London who, it is believed, installed a home-made electric self-starter, possibly the first of its kind to be developed.  The Arnold remained in Mr Dowsing’s possession for more than 30 years, until his death in 1970, when it was bought by Capt. Colver, who initially thought that the car was simply a Benz. 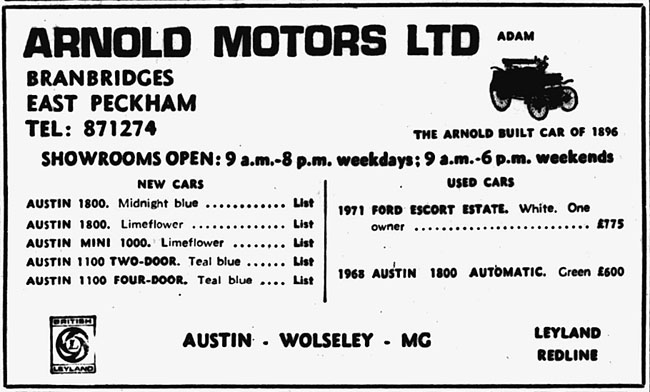 Edward Colver was a enthusiastic motorist, and regularly entered the Arnold in veteran events, including several London to Brighton Runs.  When he died in 1970, his car was bought at auction by Arnold Motors, who were still at Branbridges, running a British Leyland dealership.  By 1973 they had restored the car, and it was once again entered for the Emancipation Run.  Arnold’s perhaps understandably, named the car ‘Adam’ and, for a while used, its name and profile in their advertising. 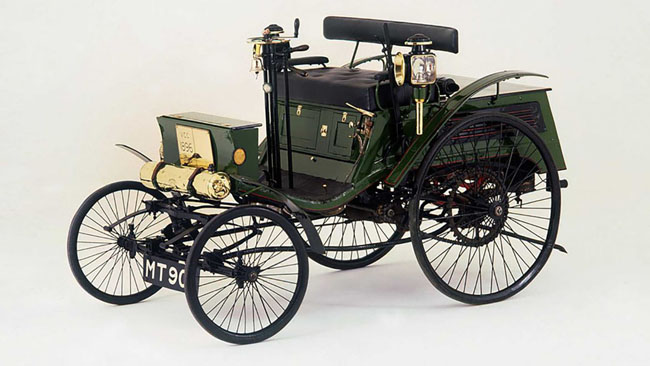