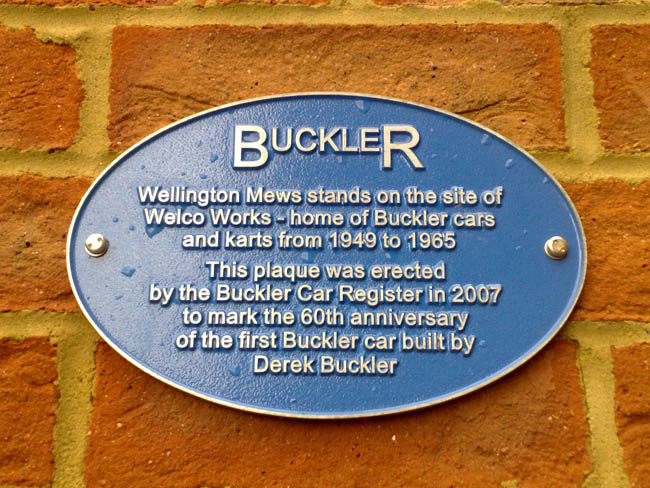 One of two locations involved in the manufacture of Buckler Cars.

Between 1939 and 1945, both businesses were involved in war work of various kinds; and when life began to return to normal, Derek Buckler became interested in designing and developing his own car.  It was at a time when many things were in short supply; new cars were certainly beyond the reach of most people, as was the sport of motor racing. 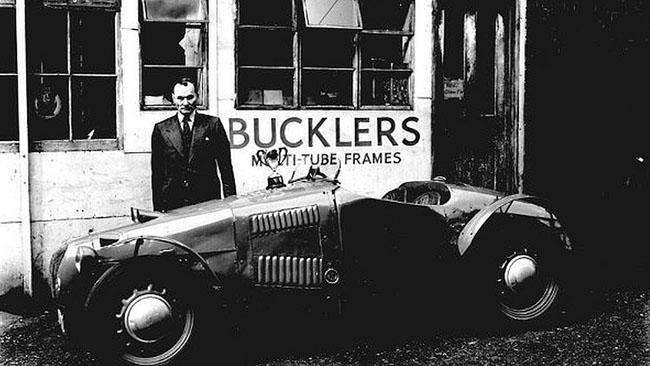 Derek Buckler’s response to this situation was to design and build his own chassis, onto which he mounted existing pre-War second-hand Ford parts.  In doing so, set in motion two important motoring trends.  The first was to become the forerunner of the post-War self-build ‘specials’, and kit-car movement; and the second was the development of the spaceframe chassis – something, until that point, was virtually untried in motoring circles.

Derek Buckler used his first car, registered DDP 201, to compete in hillclimbs and other motor sport events that were becoming increasing popular.  Although only powered by a 1939 side-valve Ford Ten engine, his car proved to be quick and nimble – top-speed was not of the essence, but going round corners as quickly as possible certainly was – and it was here that the Buckler excelled. 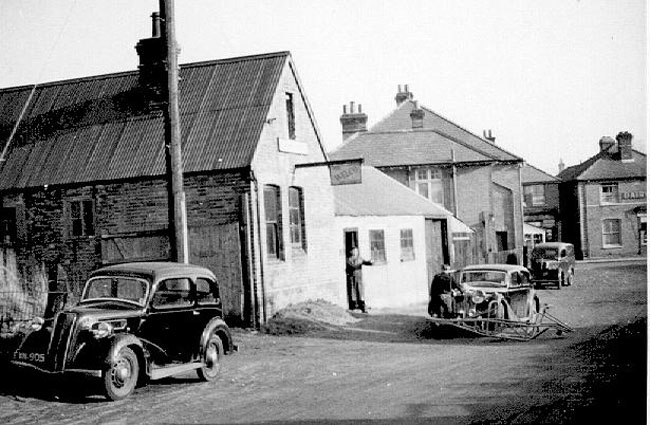 Sporting success brought requests for copies of the car, and in 1949, Derek Buckler decided to manufacture and sell spaceframes together with the major components for others to build their own car.

The main premises on Caversham Road in Reading lacked the capacity for this, and it was at this point that the Welco factory at Crowthorne became involved.  The production of agricultural machinery was largely terminated, and in its place manufacture of the spaceframe chassis was begun.

For the next 15 years, Buckler’s developed a range of lightweight sports car designs.  Beginning with the Buckler Mk V (possibly chosen to suggest that it was not the company’s first car); followed by the longer Mark VI (based on the Ford Prefect), and then the Mark X, with a full-width body. 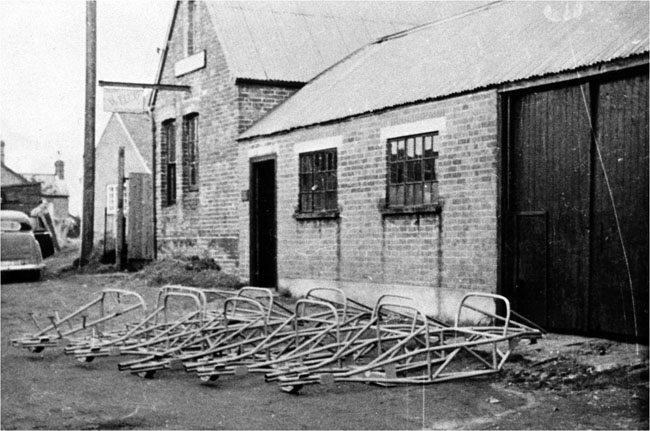 The body, however, was not part of the Buckler package, as self-build cars were at the time exempt from purchase tax, which could add almost 50 per cent to the cost of the car.  Derek Buckler believed that offering components that could be built into a complete car risked breaching this concession, and so Buckler bodies were always fabricated or purchased separately.

However, this did not necessarily involve the customer in very much extra effort, for a stable building on the Crowthorne site was let to a Mr Taylor who, with his wife, had established a metalworking business, initially making aircraft parts and bodies panels for Buckler Cars.  (C F Taylor Ltd, as the company became known, went on to become a worldwide business, involved in aircraft and marine engineering, packaging and plastics.  The plastics division apparently made many of the props for the 20th Century Fox film, Cleopatra, including eight golden crocodiles, 24 griffins and six swans for Cleopatra’s bath!) 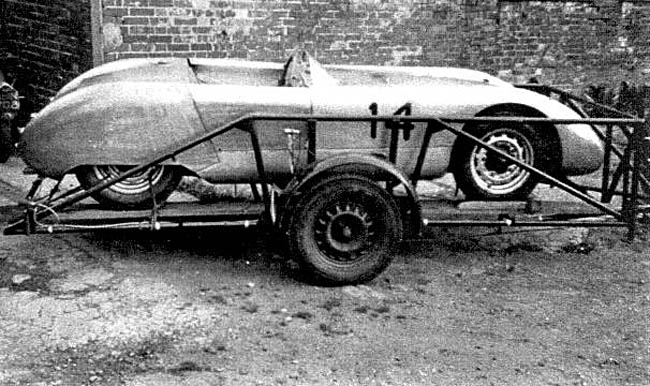 In 1954, Derek Buckler split the business into Buckler Cars, based in Crowthorne, and Buckler Engineering, on Caversham Road in Reading.  In the same year, the Buckler Ninety was introduced.  Still using Ford 103E mechanicals, but with an aerodynamic body, the new model was lighter (and faster) than the earlier marques.

Like all Bucklers, the Ninety had excellent roadholding, and although very successful (particularly in New Zealand and Australia, as well as the UK), it was further developed into the DD1 – similar in appearance, but now with de Dion rear suspension. 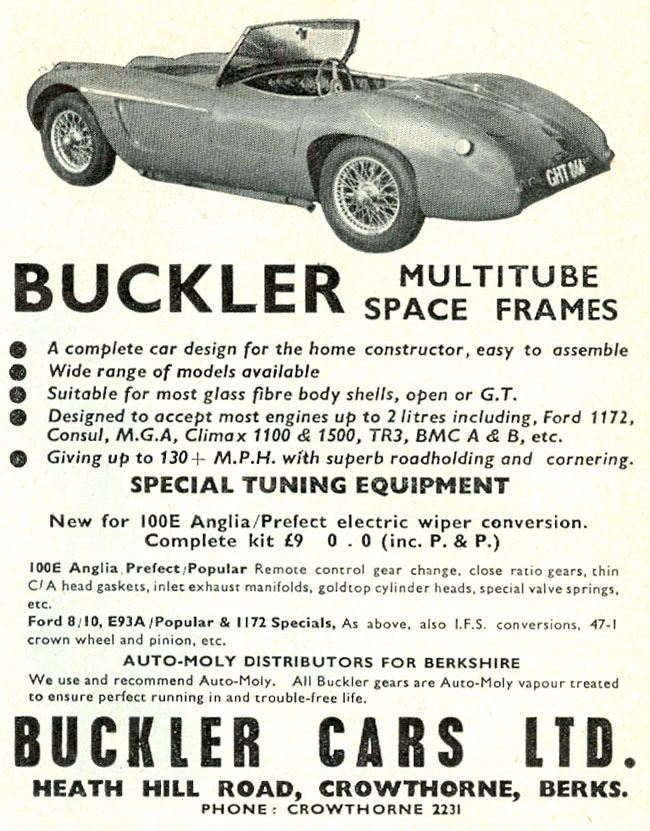 The DD2 was introduced in 1956, and was able to use a much wider variety of engines than many of the earlier models, although most cars used Ford, BMC ‘B Series’ or Coventry Climax engines.  The new chassis could also accommodate a range of bodyshells.

In 1958, Derek Buckler, now in poor health, produced his final design, known as the BB100.  It had an aluminium body, produced by John Offord, and retained the Ford 100E side-valve engine.  Its overall weight was just 7¼ cwt (less than 370 kg).

In the same year, Peter Hilton joined Buckler as co-director, and the company built their first kart.  Even in the States, karting was in its infancy, but Buckler clearly had the expertise to develop these new lightweight machines. 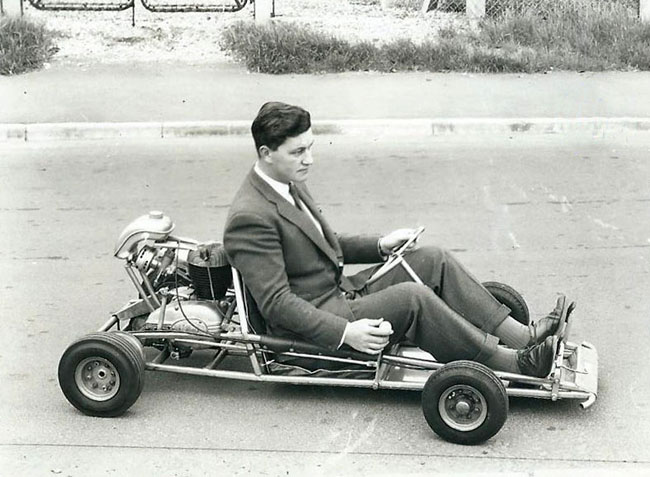 In 1961, Derek Buckler sold the Crowthorne factory to Mike Luff and Frank Fletcher.  Car and kart production continued for a short while, but not long after Derek Buckler’s death, the company went into liquidation.  The Buckler Car Register has evidence that around 280 chassis were built, of which (as of February 2020) 125 survive.

In his book ‘British Sports Cars’, written in 1958, Gregor Grant wrote: “The Buckler is noted for exceptionally fine roadholding, and the light chassis weight results in remarkably fine all-round performance from the side-valve Ford engines.  It is a most useful all-purpose machine, and is prominent in circuit racing, hill-climbs and speed events, as well as trials and rallies.”  A fitting epitaph. 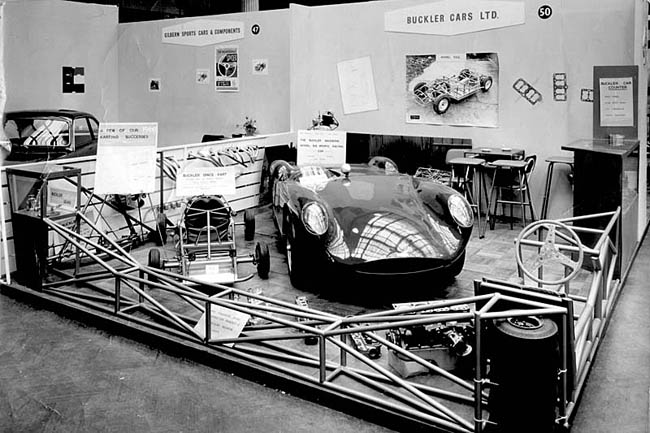 With thanks to Simon Ambrose and David Montgomery for their help in the preparation of this article.

One of two locations involved in the manufacture of Buckler Cars.